You are here: Home / Top Stories / San Diego’s Wild Side
This post may contain affiliate links or mention our own products, please check out our disclosure policy here. 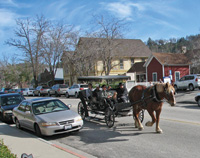 The San Diego County Wild West Media Tour was a 325-mile adventure with surprises at every turn. It took me into scenic wine and apple country, from ultra-modern golfing resorts to an ancient desert, from interesting eateries to a giant undulating serpent, and into gold rush history. I’d like to share it with you. Let’s start with California’s largest state park.

The 640,000-acre Anza-Borrego Desert State Park is named after Spanish explorer Juan Bautista de Anza. In the 1770s, he blazed an immigrant trail through this rugged terrain, leading to the colonization of San Francisco. The park has miles of dirt roads, hiking trails, wilderness areas and mountain views.

Joe Raffetto, owner of California Overland Tours, takes wannabe explorers off the paved path and up through the park’s ancient badlands that were created over millions of years by sediment and erosion. At Fonts Point, threatening storm clouds climbed over the mountains, giving us a haunting view of Borrego Springs. This village has earned its designation as an “International Dark Sky Community” by shielding and directing light only where needed to keep desert skies dark for stargazing.

I thought about how dark it was when I came upon the steel-welded sculptures posing in an undeveloped field in Borrego Springs, and then I saw a rattlesnake tail, a B-I-G rattlesnake tail. This 350-foot creature appeared to undulate under the road and through the desert. My eyes focused on its enormous rusted serpent head. The desert scrub brush yielded other shadowy Ice Age creatures. Dennis Avery, owner of Galleta Meadows, commissioned welder/artist Ricardo Breceda to create this dramatic freestanding art on his property. 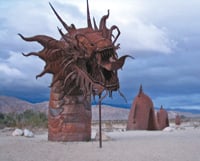 Moving forward from the Ice Age brought me to Santa Ysabel, where reportedly “a goodly number of baptized souls were present” as Padre Fernando Martin celebrated the first Mass there in 1818 in a temporary structure.  In 1822, Santa Ysabel Chapel became central to a thriving community of 450.  Erosion eventually destroyed the chapel and mud houses. In 1924, Father Edmond LaPointe erected St. John the Baptist Catholic Church, a quiet, pleasant place to relive history and say a prayer.

Also in Santa Ysabel, I discovered Dudley’s Bakery, founded in 1963. Dudley Pratt closed the store for two months every summer to explore Europe, searching for unique recipes to adapt and perfect for his customers.  Dudley has passed away but the bakery still produces fruit bars, pastries and thousands of loaves of bread every day.

Gold Discovered
Fifty years after Padre Martin’s first Mass at Santa Ysabel came a demonstration nearby that it pays to care for your steed. Fred Coleman was watering his horse when he noticed flecks of gold. He panned gold nuggets and initiated the 1869 Gold Rush. Folks swiftly staked claims and the town of Julian was born. Often boomtowns died as hastily as they were formed, but Julian pioneers stayed. They raised cattle, planted crops, and soon discovered the countryside was a great place to grow apples and make apple pies. 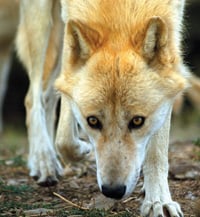 David Lewis is the fourth of five generations who have lived in Julian. His Julian Historical Tour and the view were worth the struggle up the steep hill to the Haven of Rest Cemetery.  He says, “Julian’s history has been romanticized, exaggerated, fabricated and everything in between.  Its story is of ordinary people doing extraordinary things.” He shared pictures of Julian prior to the 1892 fire that destroyed so many buildings, and of Julian now.

I stayed at the Julian Gold Rush Hotel and had dinner at Jeremy’s on the Hill in nearby Wynola. (You can read about those experiences in my Silver, Single and Solo column in this issue.)

Also in Julian is the Candied Apple Pastry Company, where executive pastry chef Charles Scott uses his transcontinental experience to create “pastry arts” from scratch.  Charles, a big bubbly guy, is a good-natured advertisement for Julian with an enthusiastic “Hi, How are you?” to everyone.  I grabbed an outside table to share one of his lunch specialties and conversation with Bobbi Zane, a local writer who once worked for Trailer Life magazine.

No, all this eating wasn’t on the same day. Tom Nickel, a big guy with a big personality, co-owns the Bailey Barbecue & Saloon. We chatted briefly while customers enjoyed the atmosphere and good food. The server recommended wood-smoked pulled pork with those great garlic fries. The Bailey Barbecue is 50 feet from the Drury D. Bailey homestead that the founder of Julian built on the main street around 1869.

Wines and Mines
Menghini Winery nestles in the Volcan Mountain foothills north of Julian. Along with wine tasting and tours, in early September they have their Grape Stomp Festa to celebrate the harvest.  You can actually stomp grapes, and enjoy Italian music, dancing, and an array of food and crafts.

In 2008, as the result of “hard work, patience, and persistence,” Lisa and Mike Schnell opened The Hawk Watch Winery at nearby Warner Springs. It faces the rocky hillside, the orchards, and beyond to the mountains.  Travelers enjoy the taste and fragrances of wine and the Schnells continue performing all the steps of premium winemaking by themselves.

For a fun underground tour, wear comfortable shoes and clothes to explore the Eagle and High Peak Gold Mine tunnels above Julian and listen to the tales of the hard living of the first gold seekers.

Protection and preservation of wildlife habitat and water resources should interest all of us. The Wildlife Research Institute near Ramona works to protect the 3,521-acre Ramona Grasslands Preserve and the Santa Maria Creek watershed. At the Julian California Wolf Center, we visited both Alaskan and Mexican gray wolves in their wire enclosures and learned about education, conservation and research programs to preserve the wolf population. 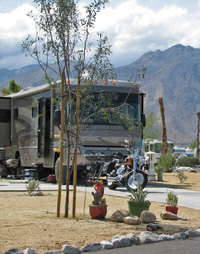 Two outstanding resorts were on my itinerary. I stayed in a travel trailer at The Springs at Borrego RV Resort and in a newly renovated lodge at Ramona’s San Vicente Resort. Both offer tennis courts and superior golf course facilities. Borrego Springs has a state-of-the-art wellness center and a saltwater swimming pool. San Vicente has two equestrian centers plus hiking trails and a junior Olympic-sized swimming pool. A lively family community of 3,500 homes surrounds San Vicente. Both resorts have spectacular mountain views.

The collections and artifacts of the Guy B. Woodward Museum in Ramona were very personal to the docent that I followed through its history. Woodward was involved with law enforcement and was honored for his work with young people.  His final interest was the establishment of this museum of local history and the early west. It includes oral histories and photos, along with a reconstructed bunkhouse, blacksmith shop and tack room. The museum is an excellent source for pioneer research.

A very different kind of history is recorded in the Olaf Wieghorst Museum & Western Heritage Center in El Cajon.  “O,” as he became known, was a prolific self-taught artist who sketched and painted 19th century cowboys, Native Americans, and early settlers.  A huge mural contains this quote, “When the time comes for me to put away my palette and unsaddle my pony for the last time, I hope that my canvases will in some small measure add to the historical recording of an era, the cowboy, and the great American West.”

Making my way toward the airport, I had one last lunch in La Mesa Village.  The enthusiastic young fellow at the Gingham restaurant recommended the tri tip melt sandwich. Wow! Matt Cope draped himself over a couch and gave me the scoop on the Gingham and its related San Diego area restaurants named Searsucker, Burlap, Gabardine and Herringbone. These “lively neighborhood hubs” are the creation of chef Brian Malarkey and his partners, who say, “Think slow roasted meats, beer, whiskey, and rock ‘n roll—something completely fun and unique to the community.”  And it is so.

Friendly people were everywhere as I followed a tour mapped out by Robert Arends, public relations manager of the San Diego Convention and Visitors Bureau, and stepped into a part of the Southwest I knew little about. I’ve just touched on the highlights here, but I will give you “the rest of the story” in my Silver, Single and Solo column in this and subsequent issues.