You are here: Home / Blog / San Francisco Cable Car Museum
This post may contain affiliate links or mention our own products, please check out our disclosure policy here. 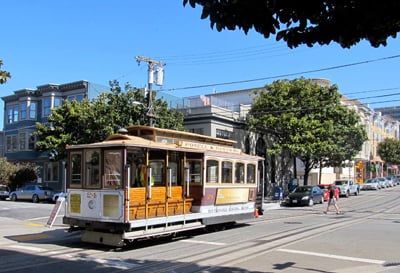 There is probably nothing more iconic to San Francisco, California than the cable car. Of course the Golden Gate Bridge is significant, but the bridge hasn’t appeared in catchy Rice-A-Roni commercials, it doesn’t move (for the most part), and lacks the mystery and romance of a bygone era. After all, cable cars seemingly travel up and down the steep hills and grades as if by magic. If you, too, are intrigued by the cable car lines that appeared in Victorian San Francisco in the late 19th century and still operate today, head to the free Cable Car Museum to learn and see more. 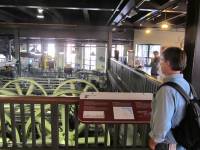 Housed in the Washington-Mason powerhouse and car barn on Nob Hill, this is an actual working site, so expect it to be rather loud and hot inside the building at times. Although you’d expect it to be complicated, the cable car system is amazingly simple, and all the more remarkable in that it has changed little since its first run 140 years ago. In essence, the cable car is pulled on rails by latching onto a moving cable inside a channel beneath the street. The cable is guided by an intricate system of pulleys. At the powerhouse, huge winding wheels driven by 510 horsepower electric motors pull cable loops at a constant speed of 9.5 miles per hour. You’ll see all of this in action at the museum.

Through a slot in the street, the car grabs the cable with a big vice-like lever mechanism called a grip. To start the car, the gripman pulls back on the lever, which closes the grip around the cable. To stop the car, the gripman releases the grip and applies the brakes. Each cable car has three types of braking systems, enabling it to securely stop on even the most vertical of routes. 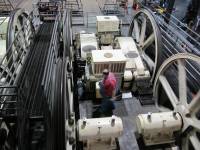 Andrew Smith Hallidie, an immigrant from Great Britain, is to thank for San Francisco’s cable cars. Hallidie knew there was a better solution than driving horses up cobblestone inclines, especially since his father already had a patent in Great Britain for “wire rope” cable. When Hallidie first came to America, he used this special cable in systems that hauled ore from mines during the Gold Rush, and also in building suspension bridges. He put his experience to good use by entering into a partnership to form the Clay Street Hill Railroad. On September 1, 1873, the company began public service. Over the years, eight different railway companies laid 53 miles of track, stretching from the Ferry Building to the Presidio, to Golden Gate Park, to the Castro, and to the Mission. Today there are just three cable car routes.

The Cable Car Museum is FREE and is the best place to learn exactly how the cars work and to see a vast collection of historic cable cars, photographs, and mechanical devices. If you like to souvenir shop, the museum store offers a variety of cable car memorabilia, books, clothing, cards and even genuine cable car bells.