You are here: Home / RV News / Santa Cruz RV Parking Ban Result of Locals' "Rage and Fear" of RVs
This post may contain affiliate links or mention our own products, please check out our disclosure policy here.

If you’re taking a RV trip through Northern California, you might want to skip the sunny Santa Cruz beaches if you don’t have local RV park reservations. In a sweeping new overnight RV parking law, the Santa Cruz City Council just approved a ban on large vehicle overnight parking on city streets and lots from 8 p.m. to 8 a.m. 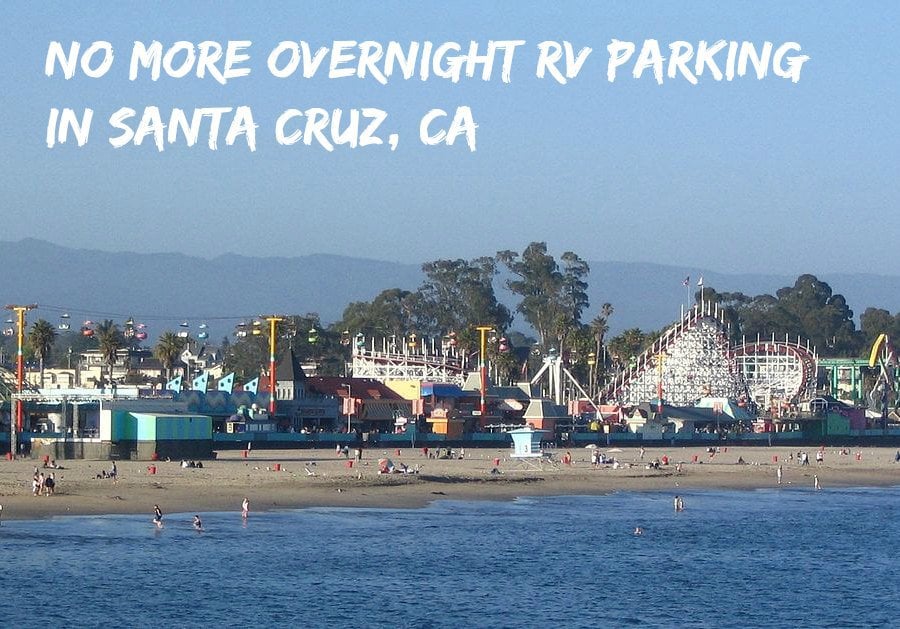 “RV parking is one of the greatest causes of concern, rage and fear,” said Santa Cruz resident Samantha Olden, a member of the community group Take Back Santa Cruz, which advocated for the RV parking ban for the last several years.

She told the Santa Cruz Sentinel newspaper that RV’s parked on city streets “is putting their neighborhoods under siege,” and indicated that she would advocate for a 24-hour RV parking ban altogether, with the exception of a permit-based RV parking system for residents only.

The original overnight RV parking ban proposition was only supposed to be valid between 10 p.m. and 5 a.m. but in a 5-2 vote the Santa Cruz city council opted for the longer hours. According to the Sentinel, the law makes an “exception for oversized vehicle owners who obtain overnight parking permits, are permitted hotel guests or are involved in an emergency or emergency repairs. Also excepted under the law oversized vehicles belonging to federal, state and local authorities or loading or unloading certain types of deliveries, or during a state of emergency.”

Unfortunately, those who are “vehicularly housed” and do not have a Santa Cruz city address would not be eligible to seek overnight parking permits, under the law.

With the new law taking effect, it seems that the city of Santa Cruz will be losing a steady revenue source: in 2013 and 2014, over 400 parking tickets were issued by the city to RV owners, according to Scott Collins, assistant to the city manager.

Meanwhile just one hour to the north of Santa Cruz, the city of San Francisco is taking on an entirely different approach with a proposition to create city sanctioned RV parking lots.

Although it’s illegal to sleep in your vehicle between 10 p.m. and 6 a.m., San Francisco parking officials rarely enforce the law which many say discriminates against homeless people. Advocates such as the Coalition on Homelessness believes more than 250 people are living in vehicles throughout the city and according to the SF Weekly, are rallying for sanctioned overnight lots for campers. Other cities such as San Diego, Santa Rosa, Ballard, Washington and potentially Los Angeles all have safe parking lots where anyone sleeping in their RV can stay without fear of being ticketed.

Whether you’re just a vacationer passing through a town or living full-time in your RV, it’s getting more and more difficult to maneuver and park your RV overnight in cities. As more municipalities enact laws like Santa Cruz’ overnight RV parking ban, taking a trip to more welcoming areas seems like a no-brainer.