You are here: Home / Blog / Sequim Bluffing
This post may contain affiliate links or mention our own products, please check out our disclosure policy here. 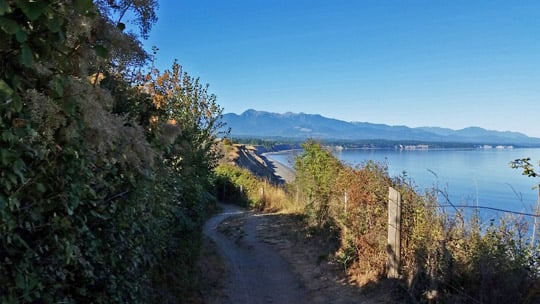 The computer blinked at me in confusion when I said, “No way, Jose, I’m not workin’ today!” and walked out the door looking for a hike. Driving on Voice of America Rd into the Dungeness Recreation Area, roughly eight miles from where I live, a doe lifted her head from munching breakfast so I stopped and talked to her a bit, a nice start to the day. I pulled into a parking spot, grabbed my hiking poles and followed the trail along the bluff above San Juan de Fuca Sound. As I walked, I kept track of the progress of a ferryboat making its way from Vancouver Island, British Columbia, Canada, to Port Angeles, WA, roughly 15 miles west of me. 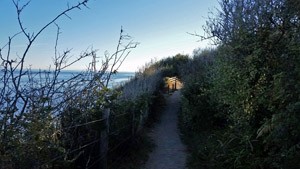 Barriers stopped me where the path dribbled down the cliffs into the sea but other paths allowed me to continue walking through the mass of tangled trees and other growth. Side paths led into the two loops of primitive camping. I’m sure they could not hear the sea through all that tangle, but they knew it was only a few yards away. That was worth something. A few picnic tables with barbecue grills along the path awaited people to enjoy them and look out toward the water.
It didn’t take very long to get to the path leading into the Dungeness National Wildlife Refuge. After a delightful conversation with the volunteer host on duty, I decided I would save the hike through the Refuge to see or go down to the Dungeness Spit until another time when I was better prepared. It’s not like it is a long ways away. 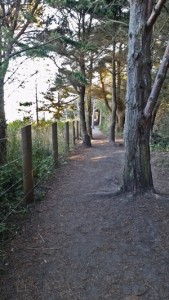 Bluff walk through the trees.

I didn’t realize until I moved here that the Olympic Peninsula is known for its farming among other things. On another day when I was out exploring I passed a lot of green fields (only with irrigation as it is very dry here right now). I found my way to the Marlyn County Park on Sequim Bay. Three kayakers were about to take off and in the distance and I got a glimpse of snow-covered Mt. Baker. This tiny park at the end of the road had a few benches to sit on to watch the tide roll in and out and any activity that was going on. Apparently, boats are put in here as well. The cliffs were high so I’m guessing you have to be aware of the tides. I know I will go there again. 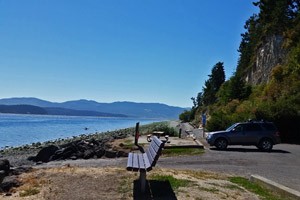 I still haven’t done all that much yet, but I did sign up for several activities over the next couple of months. I hope you are doing that, too, no matter where you live. I’ll tell you more about these places as time goes on. God Bless until next week.