You are here: Home / Top Stories / Settling in at Pecan Grove
This post may contain affiliate links or mention our own products, please check out our disclosure policy here. 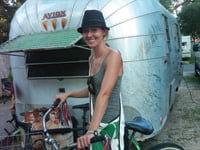 What do I need to do to reserve a spot for Memorial Day?” Beaux asked the man who answered the phone.

“You just did. How big’s your trailer?” said the terse, but friendly voice on the other end of the line.

“I’m not really sure. I think it’s an Airstream,” Beaux answered, suddenly tentative about having nabbed the last available space at the RV park for a trailer we weren’t even sure was usable.

It started only half seriously, an idea hatched in a frenzied attempt at salvaging our plans.  Sky-high hotel prices had rendered our intended holiday weekend in Austin, Texas, a much more costly venture than either my boyfriend or I anticipated.

One day not long after we’d started researching our options, my mom tossed out the name Pecan Grove. It was an RV and trailer park she’d stayed at one weekend while visiting me at college with her now ex-husband. “It’s the perfect location,” she told me, talking up its proximity to downtown, South Congress Avenue and my favorite running trail around Town Lake. 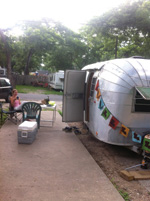 Initially, I’d been skeptical. But a former resident’s blog proved sufficiently intriguing—depicting a quirky, tree-lined throwback to storied Old Austin. Then there was the price: just $37 a night.

“What do I need to do to cancel?” Beaux asked. “Nothing,” the voice on the phone said.  “See you on Memorial Day.”

At the time we made the reservation, there had been a vague offer by my mother of the use of a frayed vintage travel trailer she owned out in the country in Louisiana but hadn’t visited in years. The 1963 Avion was gotten on the cheap after my mom and her husband happened past it on the side of a rural Texas road and called the number scrawled on the FOR SALE sign, excitement overpowering such practical concerns as insides that were melting away with rot. After an intensive restoration process designed to counteract the worst effects of entropy, the question of where to store a 19-foot trailer resulted in its relocation from Dallas to southwest Louisiana, where my grandparents lived and where space was less constrained.

For a time, my grandfather would latch the trailer to a big-engined van and pull it with him as a portable campsite during shrimping trips to Grand Isle and Vermilion Bay. But ever since a bout with bladder cancer ended my grandfather’s trawling days three years ago, the trailer had sat largely forgotten in an open lot next to Cousin Earl’s house, attracting the occasional purchase inquiry, complaint, and successive colonies of wasps and mold, a fuzzy green skin of algae covering its anodized aluminum exoskeleton. 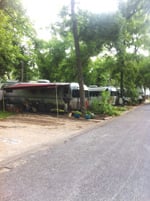 Beaux drove out from New Orleans to see it one day after work and sent pictures to my phone of its more endearing features: its white mini-oven, wooden cabinets whose doors flipped up and fastened to the ceiling with magnets, the Pepto-Bismol-pink sink and shower, and checkered seating and dining areas that folded into beds by night.

“There are 0 problems,” he texted, downplaying the dry-rotted tires and uncertain operational status of the toilet, shower and air conditioner. “It’s in a lot better shape than I expected.”

The next weekend, we spent a full day clearing away the long-abandoned fishing supplies, ossified lizard carcasses, wasp nests and roach droppings that scattered like tiny marbles when you pulled open the drawers. We named her Odette, after my great-grandmother, who came from the same section of Cajun Country. Slapping a New Orleans-themed sticker opposite the faded American flag decal left over from a previous owner, we declared her ready to roll.

When we pulled into the park mid-morning, Robert, the white-haired man behind the voice on the phone, drove up on his golf cart to greet us. He pointed out the space that would be ours for the long weekend and we followed him into his office. I looked through the makeshift library comprising assorted fiction paperbacks, AAA travel guides and VHS movies as Beaux turned over our rent for the night, receiving in exchange for his cash payment a carbon copy receipt and codes for the bathroom and Internet connection. I noted with some amusement the sign posted near the manager’s desk that outlined the only explicit interdictions applied to park residents: “No tents. No schools buses,” it read.

We quickly gathered that the little swatch of land adjacent to each of the trailer slips served as much as an indicator of its occupants’ permanence as their personality.  The set of plastic pink flamingos perched outside the shiny new Airstream near the front when we arrived, easily packed away and spirited off to the next adventure, signaled a more transient presence, one of the ten or so spaces open to people like us who had swooped in for a short getaway and were soon to return to their two-car-garages and walk-in closets. The more elaborate setups, on the other hand, those with porch swings and container gardens and in one case, a tree encased in piano guts, were telltale signs of longer-term residency.

One thing we learned about trailer living during our admittedly short go at it is that you don’t actually tend to do a lot of living inside the trailer. When your private space consists of 140 square feet, public space takes on a whole new significance. The concrete patch adjacent to our trailer, outfitted in non-descript fashion with a card table and a set of collapsible vinyl festival chairs, was the perch from which we drank our coffee and chatted with passersby. It was also the place where we hung our water-logged clothes to dry after morning runs, dips in the blue-green coolness of nearby Barton Springs and bike rides across town to grab something to eat at a Tex-Mex joint or at one of the food trucks grouped en masse along South Congress Avenue.

On Sunday morning, a man with a broad smile and a honey-toned voice wandered into our outdoor living room, coffee cup in hand, and introduced himself. This was part of his weekend ritual, surveying the new arrivals. Within minutes of our meeting, he had mounted the rusty metal step to our trailer and climbed in for a tour. “All the space you need,” he smiled approvingly as he climbed back outside a short time later. Beaux and I liked him immediately.

Oren is one of the year-rounders at Pecan Grove, the occupant of one of the 90 or so full-time spaces that over the years have been home to artists, writers, actors, athletes and even the host of a well-known TV game show. A pharmacist by training and an accomplished musician (his is the slip decorated in piano innards), Oren moved to Austin in the 1990s, attracted by the city’s laid-back reputation and its music scene. He was living in a 3,000-square-foot home on a hill when he got it in his head to buy an RV, a decision that loomed large in his front yard to the displeasure of many of his neighbors. Not one to willingly stir animosity, Oren faced a tough choice. Rather than give up the RV, he gave up his house and set his sights on the RV park he’d often happened past that was located smack-dab in the middle of the city. When he arrived at Pecan Grove to inquire about a space, Oren was told he’d have to get in line, that it would be at least a year before a space opened up. But he was tenacious. He started showing up every couple of months to chat with the manager. As time wore on, his appearances grew more frequent, and a year and a half later, his persistence paid off. Oren moved into Pecan Grove in 2000 and has been there ever since.

We returned to the trailer that afternoon to find an omelet and bacon and a note from Oren waiting for us on our card table. Beaux munched away on the neighborly offering, disregarding the hours it had spent roasting in the May heat, as he dialed the number on the sticky note. An hour or so later, Oren, his girlfriend, Shannon, and their friend Peetie were gathered on our concrete stoop. We drank champagne out of plastic cups and ate whatever snacks we found in our pantry. Beaux and Oren played guitar and we swapped stories about travel, music and other parallel interests. Oren told us about his stints playing with his band on Bourbon Street as a teenager in the 1970s. Peetie turned us on to the wonders of Marfa, the artsy desert town six hours west that boasts a mysterious light display variously attributed to ghosts and the atmospheric reflection of campfires and headlights. We talked until our little party was lit by the moon and the glow of Christmas lights, then wandered down the street to hear a band that was one of Beaux’s favorites and whose members Oren happened to know.

As we made our way home that night, warm with the lingering effects of alcohol and the mix of fatigue and satisfaction that comes from a great night out, I considered how unlikely some of the most memorable moments of our trip would have been had we opted to stay in the place that first caught my eye—a swanky boutique hotel, with private courtyards and room service. Our tight quarters and limited conventional amenities had left us entirely at the mercy of what Austin—and one another—had to offer, and the result was nothing short of magical.

Even before we left, Beaux and I were already thinking about our next trip to Austin. After all, we hadn’t two-stepped at the Broken Spoke, watched the cloud of bats emerge from under the Congress Avenue Bridge at dusk or played chickenshit bingo at Ginny’s Little Longhorn Saloon, all things that had been on my to-do list. We toyed with the idea of pulling the trailer back to Pecan Grove for the Austin City Limits music festival in October, but five months ahead, we were already too late. Robert told us the park was booked to capacity a year in advance.  Fortunately, one of the perks of trailer travel is that when the sign says “no vacancy,” you can just keep moving on. Maybe we’ll keep pushing west. Maybe we’ll head to Marfa. n

Emilie Bahr is a writer and urban planner living in New Orleans. She is passionate about bicycles, cities and running, and, recently, the vintage aluminum Avion she inherited from her mother. She can be reached at emilie.bahr@gmail.com.