You are here: Home / Blog / Old Sheep Wagons Are A Blast From The Past
This post may contain affiliate links or mention our own products, please check out our disclosure policy here.

For those traveling the Montana backroads between Billings and Great Falls, you may find yourself stopping to refuel and have a break at Harlowton Rest Area.

Located at the junction of Highway 12 and Highway 191 by Ray’s Sports & Western Wear, it is a pretty nice rest stop, and you will find hot coffee and friendly folks working at Ray’s.  You may also notice an old shepherd wagon parked on the eastern side of the complex looking somewhat forgotten. 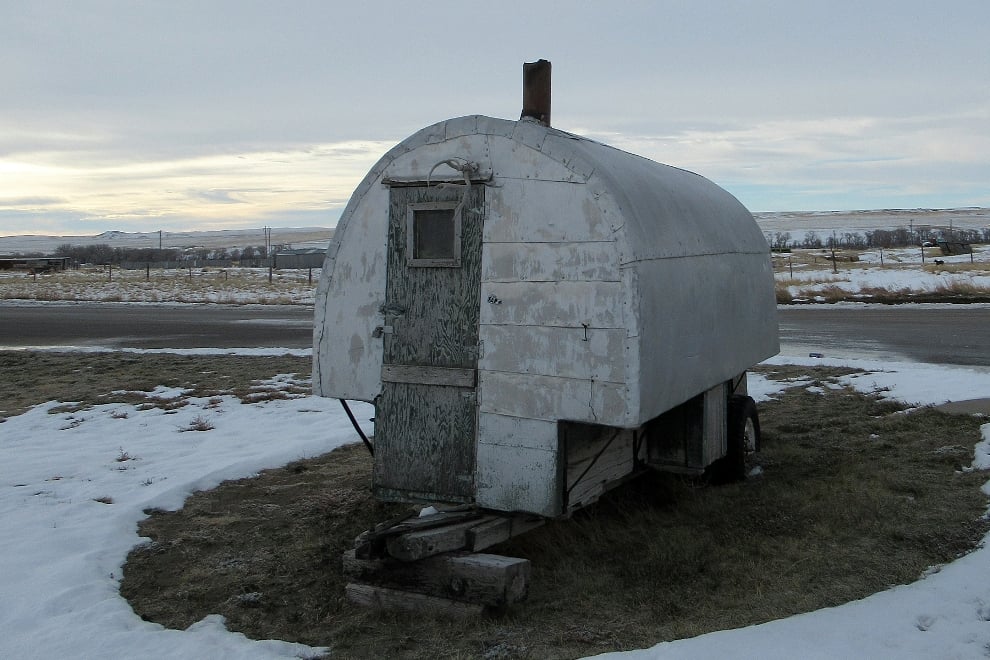 Shepherd wagons (also called sheep wagons, shepherd huts, or caravans) were commonly used in the 1400s-1900s throughout the United Kingdom and France by shepherds tending their flocks of sheep. 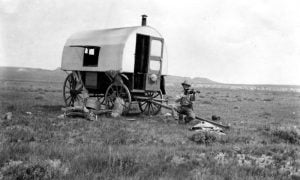 This early style of “camper” was usually pulled by horses and contained a sleeping bunk, wood stove (for heat and cooking), and a small seating area to serve as living quarters for the shepherd as he moved with the flock.

Traditionally, the shepherd wagons have an arched roof, sleeping space at the rear, with the door and wood stove toward the front where the wagon is pulled.

During the late 1800s and early 1900s, they were also used in the US as pioneers and ranchers pushed west following the gold rushes and later settlement.  SheepWagon: Home on the Range by Nancy Weidel is a great reference for the history of shepherd wagons in the US Rockies. 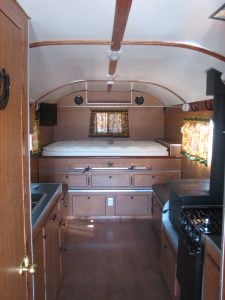 Historically, the wagons did not include running water or bathroom spaces.  It is a 2-wheeled wagon rather than a 4-wheeled variety, which were used before 4WD pickup trucks were common on ranches and allowed for easier maneuvering.

Miller runs a sheep ranch and operates The Barnsion event venue in Harlowton, which features several additional wagons—some dating to the early 1900s.  Miller knows the extensive history of many of the wagons, and his sheep farm used them up until a decade ago to tend flocks of grazing ewes.

Historically these wagons were focused on function more than comfort, but recent trends and the tiny house movement have somewhat resurrected interest in them as little living spaces.  The internet is filled with images of refurbished huts decorated in “shabby chic” motifs available for rent as creative lodging options.

Modern wagons are still produced and used toward their original function today.  Western Range Camps in Utah is one group that produces modern sheep wagons.  Their clientele is roughly half traditional agricultural herders and half recreational (hunters, anglers, and others looking for a rugged camper option).

The modern wagons still have the traditional arched roof, sleeping at the back, wood stove, and door toward the front.  The rugged design can accommodate a 4-season use (with some water system upgrades) and retail from around $30,000 to $50,000.

Models range from 12-25 feet long and feature custom options like dual heat (wood stove or furnace), a queen bed, stowed trundle bed, solar systems, stove and oven (wood or propane), and water system and bathroom options.  The wagons are adaptable for whatever adventures you have in mind.