You are here: Home / Blog / Silver Dollar City National Harvest and Cowboy Festival
This post may contain affiliate links or mention our own products, please check out our disclosure policy here. 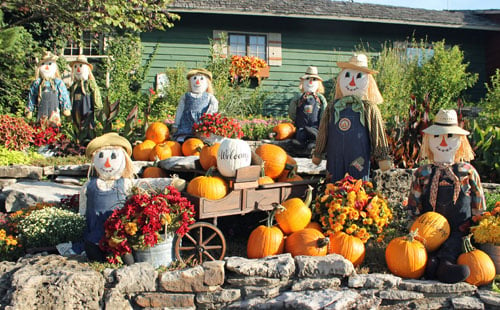 Fall is in the air in the Missouri Ozarks. And Silver Dollar City, a 1880s-themed park, celebrates autumn from mid-September until the end of October. On the village square, a mule pulls a pole in a circle around the mill to squeeze sweet green juice from sorghum cane. The juice is strained and then flows into a long flat pan heated by firewood and is cooked down to make thick, amber-colored molasses. Long ago neighbors gathered for a day to make molasses and the kids were welcome to chew on a stick of cane—rather like candy, except they had to spit out the pith once they chewed out the sweet juice. Today is no different at Silver Dollar City. Kids still get to try a stick of the natural candy. Mom and Grandma can take home a jar of the molasses to try in cookies or on pancakes. In fact, most things are no different from the 1800s around Silver Dollar City. At the National Harvest & Cowboy Festival, apple butter bubbles in copper pots, its aroma wafting through the City’s trees. The blacksmith’s anvil rings. Folks gather on the porch of the old homestead to pick out tunes on a mandolin, fiddle, guitar, and banjo. From the old homestead’s kitchen door, the mouthwatering aroma of a home-cooked dinner drifts over a crowd browsing the wares of over 125 craftsmen from around the United States. 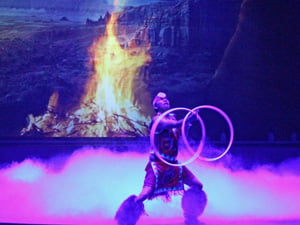 The six-weeks long festival includes the Best of Missouri Hands juried artists, as well as a showcase of Western artists, combining the celebration of fall with the rambunctious and rowdy culture of the Great American Cowboy. The Wild West Show in Red-Gold Heritage Hall, built on the enduring legends of century-old touring companies such as the Buffalo Bill Wild West Show, creates the crowning jewel of the National Harvest & Cowboy Festival. Hosted by A.J. Silver, named Act of the Year by the International Rodeo Association, the main-stage production features Nakotah LaRance, a seven-time world champion Native American Hoop Dancer. His artistic skills were a highlight in Cirque du Soleil’s touring show, “Totem.” 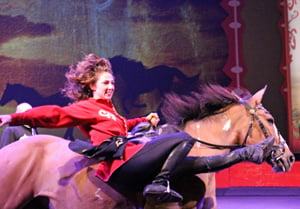 The thunder of horse hooves breaks the spell of Nakotah LaRance’s graceful and creative performance enhanced with blue lighting. Sleek and majestic animals circle the small arena. Masterful trick riders hang over the horses’ sides, loop their bodies around their necks, and even cross under the belly of the animal racing at full speed. A.J. Silver also demonstrates bullwhip artistry, turning a skill needed on ranches and ranges into a mesmerizing onstage act. 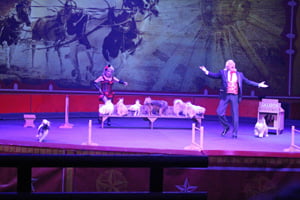 Dogs in the Arena

And then, the doggies run into the arena! A dozen furry four-footed bodies line up on a bench and one-by-one, climb ladders and jump hurdles on command—except for one who has a mind of his own. He separates himself in a little dog house with a “Saloon” sign and performs the various tricks—not on cue—but in his own timing. The ring master and his assistant chase the errant dog in frustration while the audience laughs.

Extreme Mustang Makeovers’ expert Fred Woehl tames and trains rescued wild mustangs during the festival. A horseman with 36 years’ experience training horses, Woehl serves on the National Wild Horse & Burro Advisory Board. He takes a horse—wild only a few days prior—and demonstrates adapting the animal to a rope across his back, around his neck, or even under his belly. He explains the importance of trimming a horse’s hooves and how those in the wild have a shorter life span because this task is not done for them.

Award winning Cowboy Poet Chris Isaacs tells stories and recites poems in the style that made him a three-time winner of the Academy of Western Artists “Will Rogers Award.” Waddie Mitchell entertains with the flair that netted him features in magazines and newspapers such as People, USA Today, and National Geographic. He has also appeared on the Tonight Show, Good Morning America, and the History Channel.

Western musicians perform throughout the park, including Western Album of the Year winner Belinda Gail, Vocalist of the Year, Syd Masters, and Western Music Association Female Performer of the Year, Kristyn Harris. The Barn Dance returns to the 2015 National Harvest & American Cowboy Festival with music by Silver Dollar City’s Horsecreek Band. In 45-minute sessions three times daily during the Festival, guests have the opportunity to slide, stomp, and scoot boots around the dance floor set up at the Carousel Barn.

Harvest-time foods are served throughout the park, with favorites such as homemade soups, stews, smoked turkey legs, and hearty skillet meals cooked on open grills. For a special treat, the apple dumpling with a dollop of cinnamon ice cream melts in one’s mouth! During The National Harvest Festival, Silver Dollar City is open Wednesdays through Sundays, 10: a.m.-6:p.m. with a 9:30 a.m. opening on Saturdays. For information called 800-831-4386 or check www.silverdollarcity.com.