You are here: Home / Departments / Product News / Simplifying Fifth-Wheel Hookups
This post may contain affiliate links or mention our own products, please check out our disclosure policy here. 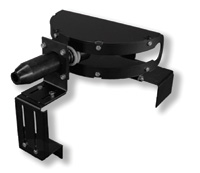 Joseph Glazner, an engineer who lives in East Texas, was trying to hook up the electrical wiring between his fifth-wheel trailer and his truck one day when he bumped his head on the nose of the trailer.

There must be a better way to do this, Glazner thought, and so he invented one.

The result is the Fifth Wheel Auto-Connect System, a patented solution to take the hassle out of connecting and disconnecting the electrical components of a truck and fifth-wheel trailer. It does the job automatically so you don’t even have to leave the driver’s seat.

With the Auto-Connect System, when you connect your fifth-wheel trailer to your hitch in the truck, you automatically connect the electrical systems, too.

“We make the connection so you don’t have to,” is the theme adopted by Auto-Connect Tow Systems, the family company formed to market the invention. Glazner’s son-in-law, Randy McBrayer, the company’s operations manager, said the system not only simplifies the hookup process, it also eliminates mistakes.

After unhitching a fifth-wheel, people sometimes forget to disconnect the electrical cables before pulling the truck away. That can cause a lot of damage.  Or they forget to hook up the cables when they start out. Neither of these things can happen with the Fifth Wheel Auto-Connect System because it automatically connects the electrical components when the trailer is hitched and disconnects them when the trailer is unhitched.

And the system contributes to safety, too. “When the truck and fifth-wheel trailer are coupled together, it is virtually impossible for the electrical connection to de-mate,” McBrayer said.

The system, which went on sale in July, is being manufactured in the U.S. and is distributed to dealers through Stag-Parkway. The suggested retail price is $299.

McBrayer said the system can be installed by a dealer, or you can install it yourself in about an hour and a half.

For information, visit actowsystems.com. The website includes a video that shows how the system works.