You are here: Home / RV Trailers and Motorhomes / Smallest Airstream Ever Made
This post may contain affiliate links or mention our own products, please check out our disclosure policy here.

Most vintage Airstream aficionados have long believed that the smallest Airstream ever made was the Cruisette, which measured just under 15 feet. The Cruisette was manufactured in 1951 and 1952 in Airstream’s California facility and was marketed as a weekend getaway trailer. Since it had little insulation and no refrigerator or bathroom, it was little more than an aluminum tent on wheels. The no-frills package may have contributed to its less than stellar sales (estimates are that less than 1,000 were made). Nowadays, because of its rarity, it commands a hefty price.

Littlest Discovery
The Cruisette owned the crown as the tidiest Airstream until September 2004, when Airstream collector Ken Faber of Wyoming, Michigan, rolled up to the Tin Can Tourists rally in Camp Dearborn, Michigan, with a tiny silver trailer in tow. As Ken made his way to the registration area, the campground looked like a scene from the Pied Piper as dozens of rally attendees walked behind the trailer trying to get a better look. When Ken finally parked and got out of his car, he told the audience the tale of Der Kleine Prinz, which at 13 feet is the smallest Airstream ever made.

Faber said that although the provenance of the trailer can’t be absolutely verified (there are no pictures of its manufacture or an original bill-of-sale), it is clear that Airstream built the trailer in 1958 at its Jackson Center, Ohio, facility. Bob Ambrose, a retired Airstream employee, thinks the trailer was built at the request of Airstream founder Wally Byam after Byam returned from an Airstream caravan in Europe. The European connection may explain the trailer’s German name Der Kleine Prinz (the little prince).

It’s unclear what happened to the tiny trailer in the 1960s, but in the 1970s it was discovered on a used car lot and purchased for $800 by a couple from Muncie, Indiana. A few years later the couple got $1,500 in trade-in value for the Prinz toward another Airstream product, an Argosy Minuet. Thereafter, Der Kleine Prinz sat in the Berning’s Trailer Sales showroom in Fort Wayne, Indiana, as an attention-getting conversation piece. Acting on a tip from a friend, Ken Faber first saw the trailer in 1992, but it took 12 years of persistence before he finally convinced Rick Berning, the company’s owner, to sell it to him.

Far from Ordinary
Unique features of the trailer are the Lilliputian bathroom with shower that Airstream managed to wedge into the left rear corner, a three-burner stove, refrigerator, propane-fired heater and perhaps the most unique of all, a Der Kleine Prinz nameplate. The nameplate is particularly noteworthy because at the time of its manufacture in 1958, Airstream did not routinely put nameplates on its custom trailers, more evidence that it was probably Byam who commissioned the trailer. 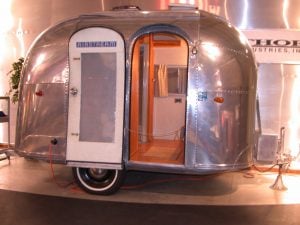 The actual box of the trailer is 6 feet by 10 feet with a 6-foot, 3-inch ceiling. The tidy proportions make sleeping a bit of a challenge for the 6-foot, 3-inch Faber and his wife, Petey. (Ken sleeps cross-wise on the floor and Petey sleeps on the bed). But in reality, the Fabers see themselves more as guardians of Der Kleine Prinz and rarely use it for camping since they also own a 1948 Wee Wind, 1963 Bambi, 1964 Bambi II, two 1964 Globe Trotters and a 1938 Hayes trailer.

Faber says he has received offers to buy the trailer from as far away as Japan. But after waiting for over a decade to finally snag the little trailer, he’s not going to let go of it anytime soon.

Douglas Keister’s new book, Mobile Mansions: Taking “Home Sweet Home” on the Road, was published by Gibbs Smith Publishers in May. Doug is also the author of Ready to Roll: A Celebration of the Classic American Travel Trailer and Silver Palaces: America’s Streamline Trailers. Personalized autographed copies are available from Doug. You can reach him at doug@keisterphoto.com