You are here: Home / Blog / Smuggler Mining Camp
This post may contain affiliate links or mention our own products, please check out our disclosure policy here.

A few weeks back we explored the ghost town of Comet, Montana followed by a free place to camp nearby in the following week’s entry.

If you have placed Comet on your “to do” list for next summer’s RV adventures, then you will want to head south about 60 miles to the Smuggler Mine where you will find more historic ruins to explore and of course more free places to camp. I love free! 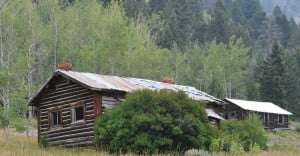 A Couple Of Old Miners Cabins

Following is a brief history of the mine. The mine was first claimed in 1897 by John and Thomas Cavanaugh, James McDonnell, Mrs. Clara Conley and Carrie Herman. By the late 1920s the Smuggler Mine property consisted of 13 unpatented claims producing primarily gold with some silver. A hydroelectric plant located above the mine powered a 100 ton amalgamation and concentration mill. Additional improvements at the mine included nearly 25 buildings including an office, assay office and numerous cabins to house approximately 45 people, most are still standing today. At one time the site had running water, electric and telephone systems. 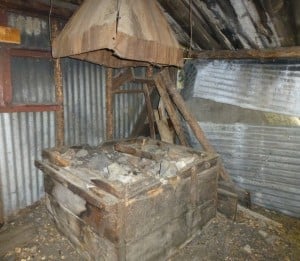 While records are spotty through the years, documented production from 1930 to 1933 reported that $24,117.03 in gold or roughly 1,040 ounces was mined during that period. In today’s dollars that is equivalent to over 1.1 million. The mine operated until 1942 and then again in the 1950’s, however no further production was documented or taxed during those times. A new adit was opened in 2010 in a renewed hope to find gold, but little ore was shipped and the site was again abandoned.
Exploring the mining history of Montana where it happened, without admission to a museum, just another adventure in RVing!

Next week I will share several free camping options near the mine site. Stay tuned!

The “Grand Entrance” to the Mining Camp

The site is protected under the American Antiquities Act of 1906 which prohibits the removal of artifacts or destruction of historic structures. The mine is also currently claimed making it illegal to remove minerals without the claim owners consent. Please respect it and take only pictures.