You are here: Home / Blog / Brave The Winter Storms…
This post may contain affiliate links or mention our own products, please check out our disclosure policy here. 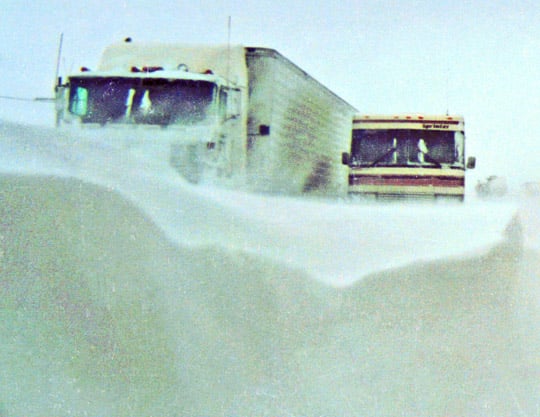 On the road during a snowstorm in the Texas Panhandle in the winter of 1988 while on route to Mexico.

I was recently mesmerized with the major snowstorm that ravaged the eastern part of the United States over the weekend, partly because I had a granddaughter who recently moved to New York State and more immediately, a daughter and her husband who were visiting Baltimore, MD for a referee conference. CNN covered the storm from every possible angle and while I put together a homemade stew, I was glued to the TV.

It reminded me of past storms when our kids were growing up. We were very fortunate to be snowed in at home altogether, not separated by being stuck at school or work. It was always a fun time to be outside to play in the snow, digging snow houses, or tobogganing down the hill in the field behind our house.

My 20-year saga of full-time RVing began in 1986 and mid-1987, I went back to Michigan and bought a new Class-A Sprinter motorhome. This picture that was taken in a snowstorm in the Texas panhandle must have been taken during the winter of 1988 on my way to Mexico for the winter. I know this because it was still new enough that it didn’t have the big black screen across the front for a trip to Alaska. 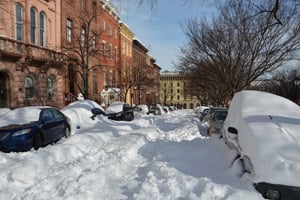 Anyway, the wind was blowing and snow was deep as I made my way west along the I-40. The weather got so bad that I knew I should get off the Interstate. I couldn’t do that just anywhere crossing Texas because most of the roads wandered into the middle of nowhere, where they turned into gravel leading to a distant ranch. When I finally saw a huge truck stop, I pulled in along with everyone else who needed to get off the road. I parked between two major semis and went into the restaurant while the snow piled up.

The storm lasted for several days and with more people than seats in the restaurant, we sat anywhere there was an empty seat. Being up close and personal, we got acquainted with each other. Actually, it was a fun time, pretty much a prerequisite for the RVing days ahead. While these people were traveling by either car or truck, it was still a lot like how I found RVers to be as I enjoyed my many years of full-time RVing. If you were friendly, they were friendly, and I found that friendliness existed everywhere, whether it was in a campground, sitting by a fire, hiking on a trail, or enjoying fantastic scenery somewhere.

I wish the same friendliness and joy for you and as you travel, in any way that you travel.