You are here: Home / Top Stories / Winter RVing In Yellowstone National Park
This post may contain affiliate links or mention our own products, please check out our disclosure policy here.

Summer finds hordes of tourists, and even though many animals amble up to higher ground to avoid contact with the crowds, visitors still see an occasional moose, wolf or bison herd. Fall’s calming is accompanied by the vibrant colors of the leaves and the rutting moose, elk, deer and pronghorn and bighorn sheep. 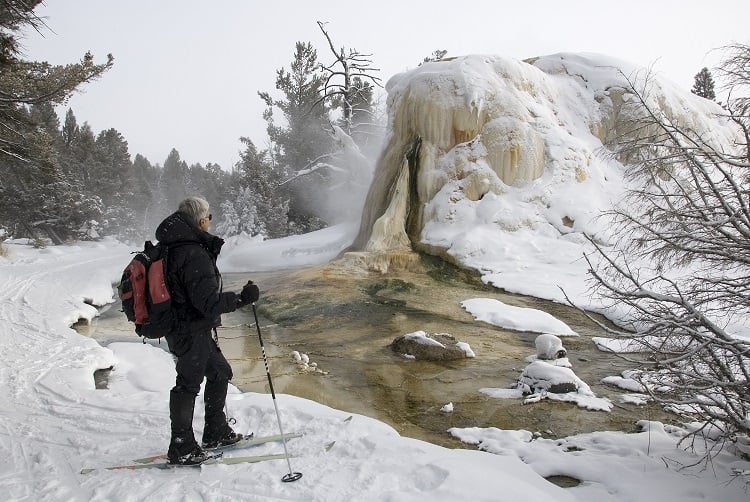 But it is in winter when the snowstorms arrive that you can bask in the warmth of the park’s Old Faithful Snow Lodge and glimpse otherworldly images at the geyser basins.

Visit Yellowstone in winter, and you’ll feel as though you’re seeing the park’s animal and geological wonders for the first time. I love Yellowstone on any day of the calendar, but my favorite time of year is the cold season when the frigid temperatures and deep snow reveal sights like nothing you’ve ever seen. 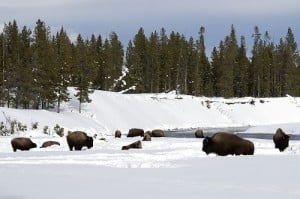 My husband, Mike Vining, and I recently made our first winter trip to America’s oldest national park, founded in 1872. When we arrived at the town of West Yellowstone, Montana, on the western border of the park, we discovered that we weren’t the only visitors with winter-travel plans. The community bustled with skiers, snowshoers and snowmobile enthusiasts.  Despite our differences, we all had something in common: a thirst for winter adventure.

Shortly after arriving, we bundled up, clipped on backcountry skis and glided into the park on a trail open only to skiers and snowshoers.

During the six-mile trek, we came upon a herd of bison standing belly-deep in snow along the Madison River. The huge mammals were unfazed by us, so we stood and watched as they used their big heads as snow shovels in their search for browse beneath the thick snow.

As we skied back into town, the biggest storm to hit the area in years descended with a vengeance, but the cold winds and snow didn’t keep us indoors.

After taking off our skis, we strolled around town, shopped the local bookstore, savored a scrumptious meal and watched spectacular films at the Yellowstone IMAX theater.  Later, we visited the Grizzly and Wolf Discovery Center, which provides a large outdoor habitat for nuisance or orphaned bears and wolves that are born in captivity and are unable to live in the wild. 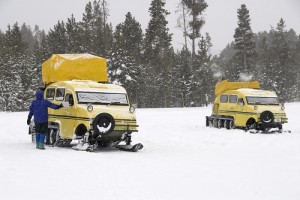 On our second day, we prepared for our next adventure: a snowcoach ride to the Old Faithful Snow Lodge. When our driver came for us and six other passengers at the Stage Coach Inn, we smiled and happily squeezed inside the historic coach, which trundled across the snow on treads.

We grinned as we approached the park entrance, but smiles faded when a ranger greeted us with news that the storm was just too nasty to allow a trip into the park.

Later, after our return to town, the weather calmed a bit and we caught another snowcoach ride. On the way, we passed an abandoned snowcoach hanging off the side of the road.

Our driver said she’d never seen anything like it. We got to the Snow Lodge and found a note, “Winter Storm Halts Most Travel in Yellowstone,” on the table in our room.

Our first full day near Old Faithful dawned stormy, but after waiting so many years for the opportunity to explore this wintery landscape, the last thing we were going to do was hunker down.

Instead, we bundled up in many layers, clipped into our backcountry skis and glided around the Upper Geyser Basin in a blizzard. 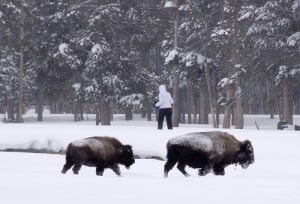 Unfortunately, the eruptions of the world-famous Old Faithful geyser were partially obscured by the steam, and after spending hours taking photos of bison and other wonders in windy, sub-zero conditions, we headed back. A hot shower followed by a hamburger and bowl of chili warmed us up.

Our second full day at Old Faithful saw partly cloudy skies, and we returned to Upper Geyser Basin for a much-improved view of the largest concentration of geysers in the world. We gazed in awe at the array of steaming thermal pools and rime-covered trees and snags. Old Faithful erupted in all its glory, and the bison and geothermal features were more amazing than we’d ever seen.

The next day, we got up early for our snowcoach ride back to West Yellowstone. We had a much more leisurely ride back to West Yellowstone, allowing us time to stop at the half-mile loop boardwalk that takes visitors to Fountain Paint Pot, a multicolored pit of acidic mud that boils away under intense geothermal heat. Farther along, we watched the almost-constant Clepsydra Geyser. 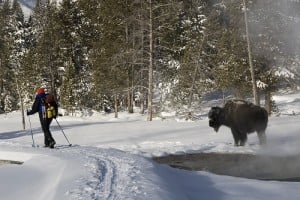 After returning to West Yellowstone, we packed up and began the drive to Gardiner, Montana, located on the northern border of the park. In the summer, the trip between the two towns is an easy 54-mile journey, but in the winter, when the road is closed, visitors have to travel 174 miles through Bozeman and Livingston.

The following day, with a sack lunch and thermos of hot cocoa on hand, we drove from Gardiner to Cooke City, Montana, a journey that took us through the Lamar Valley along the Northeast Entrance Road, the only road in the park open during winter. We saw herds of frost-covered bison, huge bull elk and a couple of coyotes squabbling over a carcass.

A pack of 16 wolves padded into view on a ridge across the Lamar River. Later, while driving the road at a snail’s pace, we passed a lone wolf gawking at us in apparent surprise. The encounter was short-lived. In an instant, the wolf bolted up a nearby slope and stopped every few seconds to look back at us.

On another day, we headed back east along the Northeast Entrance Road to Tower Junction. Here, we skied 2.5 miles along a moderate trail to Tower Falls, a 132-foot waterfall that freezes solid in winter. 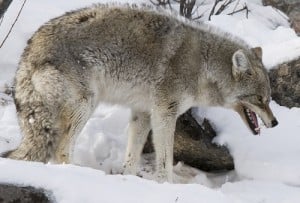 On our last morning in the park, we skied the easy 1.5-mile Upper Terrace Drive loop at Mammoth Hot Springs, about 10 miles south of Gardiner.

We moseyed past the area’s famous limestone terraces, relished the sight of frost-covered trees and stood in wonderment of Orange Spring Mound, a natural spring whose hue is the result of bacteria and algae.

Sights like this remind me of why I love Yellowstone, particularly in winter.

Yellowstone’s winter season runs from mid-December through mid-March. The only park road open to wheeled-vehicle use during this time is the Northeast Road from the North Entrance at Gardiner to the Northeast Entrance at Cooke City. Snow tires and chains may be required. 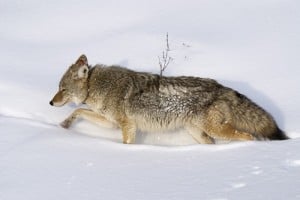 Backcountry explorers must heed a number of rules. Skiers going uphill should yield to those descending, and you should never snowshoe or walk directly on ski tracks.

Also, remember that trails are not checked or groomed daily, making some pathways difficult to follow. Always leave your itinerary with someone and learn how to use a topographic map and compass.

The campground at Mammoth is open year-round and is your only option for RV camping in the park in winter. Other options include the Old Faithful Snow Lodge and cabins, which are accessible only by snowmobile and/or snowcoach, and Mammoth Hotel and cabins.

Xanterra Parks & Resorts, which operates the lodge and hotel, offers package deals that can include lodging, cross-country ski rental and more. You can stay at the lodge and take snowcoach shuttles to various ski locations. See yellowstonenationalparklodges.com.