You are here: Home / Top Stories / Soaring Above It All
This post may contain affiliate links or mention our own products, please check out our disclosure policy here.

Some hot air balloons are strikingly beautiful and some are humorously cartoonish, but all are picturesque and inspire awe as they soar into the air. This summer and into the fall, there will be many opportunities to see and photograph them at more than two-dozen balloon festivals throughout the West.

You will need to be an early riser to see most balloon launches because the three hours after sunrise are some of the best times to fly. Pilots avoid midday flights to keep away from air turbulence. Balloons fly best in cool weather with light winds.

Weather conditions determine whether balloons can be launched and so the phrase “weather permitting” is routinely attached to launch schedules.  Inflating a balloon and retrieving it after a flight requires a team effort, and spectators are sometimes enlisted to help. Balloon rides are available sometimes, too.

The festivals typically include a “balloon glow,” with burners fired up to illuminate balloons tethered to the ground, creating a colorful spectacle. Many festivals include other activities, such as carnivals and art fairs. 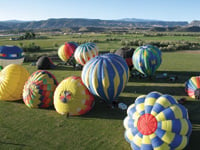 Eyes to the Sky Balloon Festival
June 21–23 — About 25 hot air balloons will be launched from a grassy field a mile west of Salina, Utah, at sunrise Friday, Saturday and Sunday. Breakfast will be served Saturday at the launch site.

Activities on Main Street in Salina in Sevier County will include ATV, motorcycle and hot rod events, a five-mile bike race, and entertainment. (eyestotheskyballoon.com)

Festival of the Balloons
June 21–23 — Hot air balloons will rise from Cook Park in Tigard, Oregon, sometime between 5:45 and 6:15 a.m., on Friday, Saturday and Sunday. Night glows are scheduled at dusk Friday and Saturday.

The festival will include musical entertainment, a carnival, a soccer tournament, craft and food vendors, a car show and rib and corn eating contests. (tigardballoon.org)

Panguitch Valley Balloon Rally
June 28–30 — Hot air balloons will ascend at 6:30 a.m. Friday, Saturday and Sunday at Panguitch, Utah, a 20-minute drive from Bryce Canyon. Spectators are welcome at the launch field and also are invited to help pilots inflate their balloons for a balloon glow at dusk Saturday. The balloon glow will be at Main and Center streets in Panguitch’s historic downtown.

There will be live entertainment at 7 p.m. Friday and Saturday, a Harley Davidson parade and rodeo, a karaoke contest, dog competitions and a street festival. (panguitchvalleyballoonrally.com)

Hot Air Balloon Rodeo & Art in the Park
July 13–14 — Steamboat Springs, Colorado, is the site of an event combining hot air balloons and art.  More than 40 balloons will take off from Bald Eagle Lake between 6:30 and 9 a.m. Saturday and Sunday.

After watching the launch, spectators can go to Art in the Park at West Lincoln Park and enjoy entertainment and the offerings of 140 vendors.  The art show will run from 9 a.m. to 5 p.m. Saturday and 9 a.m. to 4 p.m. Sunday.  There will also be a rodeo at Romick Arena in downtown Steamboat Springs Friday and Saturday nights.  (steamboat–chamber.com)

Balloons over Bend
July 19–21 — Balloons will be launched at Riverbend Park in Bend, Oregon, at sunrise on Friday, Saturday and Sunday and balloons will be illuminated at dusk during Night Glow on Friday night.  This family event includes a children’s festival from 10 a.m. to 5 p.m. Saturday and 10 a.m. to 2 p.m. Sunday, with more than 60 activities, including bouncy houses, face painting and crafts.  Admission is free, but there is a charge for some activities. (balloonsoverbend.com)

Citrus Classic Balloon Festival
July 26–27 — Hot air balloons are just one of the attractions at this event in Santa Paula, California, that also will include a car show and an air show with sky divers.

The event, held at East Area 1 Fields off Highway 126, will begin Friday night with wine tasting, a balloon glow and a sunset dinner.  Saturday activities will include tethered balloon rides and ascensions, starting at 6:30 a.m., a vintage tractor display, a Ventura County tasting pavilion, and a beer and wine tasting garden. (citrusclassicballoons.com)

Sandy Hot Air Balloon Festival
Aug. 9–10 — The first wave of balloons will launch at 7 a.m. and the second at 7:30 a.m. Friday and Saturday at Storm Mountain Park in Sandy, Utah. On Saturday night, activities will move to the South Towne Promenade in front of Sandy City Hall, with a balloon glow at 8 p.m., food and entertainment. Spectators who take photos and videos at the event can enter a contest to win prizes. (sandy.utah.gov)

Northwest Art and Air Festival
Aug. 23–25 — Hot air balloons, a car show, art demonstrations and entertainment headlined by the rock group Foreigner will be offered at Timber-Linn Memorial Park in Albany, Oregon.
Hot air balloons will lift off each morning at 6:45. Art and food vendor booths will open at 4 p.m. Friday, 10 a.m. Saturday and 11 a.m. Sunday. There also will be musical entertainment afternoons and evenings, along with a wine/microbrew garden.  Foreigner, which has sold 75 million albums with hits such as “I Want to Know What Love Is,” and “Juke Box Hero,” will perform at 8 p.m. Saturday. (nwartandair.org)

Spirit of Boise Balloon Classic
Aug. 29–Sept. 1 — Balloons will inflate and lift off from Ann Morrison Park in Boise, Idaho, shortly after 7 a.m. Thursday through Sunday during this event that will involve as many as 40 balloons.  Nite Glow at the park Friday night, starting at 6 p.m., will include hot air balloon demonstrations, music and food. The “glow” portion of the event will get under way at about 8:15. (spiritofboise.com)

Colorado Balloon Classic
Aug. 31–Sept. 2 — Billed as the largest and longest-running balloon festival in the Rocky Mountain region, the Balloon Classic has been held in Colorado Springs every Labor Day weekend since 1977. Dozens of balloons will ascend each morning at Memorial Park near the shores of Prospect Lake. Balloon glows and entertainment will be presented Saturday and Sunday evenings.  Admission is free. (balloonclassic.com) 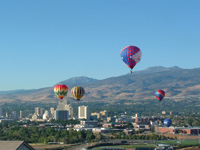 Sept. 6–8 — Up to 100 balloons and as many as 150,000 spectators gather annually for one of the country’s biggest balloon festivals, held over three days at Rancho San Rafael Regional Park, near the campus of the University of Nevada, Reno.

This festival includes a competition in which pilots maneuver their balloons over targets and try to hit an “X” with a beanbag. In another contest, called Balloon Blackjack, pilots throw markers at jumbo-sized playing cards, trying to hit 21. There is $12,000 in prize money at stake.

Mass ascensions are scheduled for 6:45 a.m. each day, preceded at 5 a.m. by a glow show, with glowing balloons greeting spectators to the launch site. And on Saturday and Sunday, balloonists who are qualified to fly in the dark will be up in the air before dawn, flying to music and the cheers of the crowd. Other features at the event will include tethered balloon rides and vendors offering merchandise, crafts, souvenirs, food and warm drinks. (renoballoon.com)

Quincy Valley Hot Air Balloon Festival
Sept. 14–15 — This balloon festival is held in conjunction with Farmer-Consumer Awareness Day in the eastern Washington town of Quincy.  Balloons will be launched at sunrise Saturday and Sunday at Parties on the Green at Twin Firs Turf farm. This will also be the site of a balloon glow, wine festival and fireworks show Saturday evening.

The Farmer-Consumer Awareness Day will include a host of activities in Quincy Saturday, including a car show, tractor pull, parade, barbecue, quilt show and a potato-peeling contest. (partiesonthegreen.com and quincyfarmerconsumer.com)

Clovis Fest
Sept. 21–22 — Pilots will start inflating balloons at about 6:15 a.m. and lift off at 7 a.m. at the rodeo grounds in Clovis, California. Afterward, spectators can walk across the street to sample the wares of 200 art, crafts and food vendors on Pollasky Avenue in Old Town Clovis.  The festival will run from 8 a.m. to 5 p.m. Saturday and Sunday, with attractions that include entertainment, a carnival and a beer garden. (clovischamber.com)

Ruby Mountain Balloon Festival
Sept. 26–29 — Pilots of hot air balloons will make a school visitation Thursday to begin this event.  Balloons will ascend to the skies from the Spring Creek Sports Complex, near Elko, at about 7 a.m. Friday, Saturday and Sunday. A balloon glow will be held in Elko Friday evening. (rubymountainballoonfestival.com) 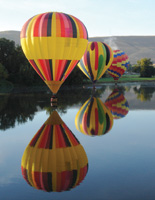 Great Prosser Balloon Rally
Sept. 27–29 — The Prosser Washington Airport will be the site of sunrise launches of hot air balloons Friday, Saturday and Sunday in the Washington town of Prosser. Spectators are advised to arrive at about 6:15 a.m. to watch the preparations, and some may be invited to help inflate, chase and recover the balloons.

The event will include a harvest festival each day in downtown Prosser, a street dance Friday night, and a balloon glow show, barbecue and entertainment Saturday evening at Art Fiker Stadium. (prosserballoonrally.org) 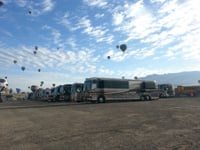 Mass ascensions are conducted in two waves starting at about 7:15 a.m., led by a balloon flying the American flag to the music of “The Star-Spangled Banner.” A few balloons that can be piloted in the dark go up even earlier. Balloon glows are an evening attraction, followed by a fireworks show. The event includes musical entertainment, chainsaw carving and other activities. (balloonfiesta.com)

This is a partial list of balloon festivals. More can be found at balloonfestivals.com.