You are here: Home / featured / What You Need To Know About The Upcoming 2017 Solar Eclipse
This post may contain affiliate links or mention our own products, please check out our disclosure policy here.

Do you have your campsite reserved for what is being billed as the event of the century? On Monday August 21, 2017, a total eclipse of the sun will occur from coast to coast across the United States, forming a 70 mile corridor of darkness across 14 states.  The eclipse will begin as a partial eclipse at 9:06 AM (PDT) on the Oregon coast and will end later that day as a partial eclipse at the South Carolina coast at 4:06 PM EDT. 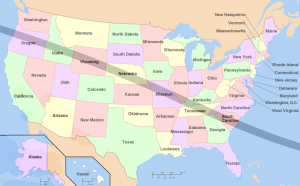 The path of the 2017 solar eclipse.  Photo by cactus26 on Wikipedia

How rare is this event? The last time a total solar eclipse was visible across the entire contiguous United States was June 8, 1918 nearly one hundred years ago. Making this event even rarer is the fact that its path of totality falls exclusively within the United States, making it the first such eclipse since 1776 when the United States declared its independence. Before that, June 13th, 1257 was the last total eclipse that fell exclusively on lands currently part of the United States! This truly is a once in lifetime event.

This eclipse is unprecedented in modern times given that 12.2 million people reside in the path of totality and 88 million live within reasonable driving distance. Another thing to consider is the fact that this is the first cross-country total solar eclipse since the advent of the automobile and the creation of the interstate freeway system. 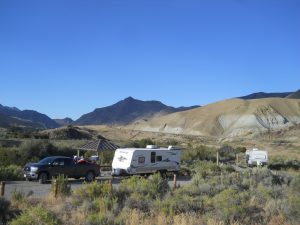 Deadman Hole BLM Campground – Free sites near the Salmon River, Idaho. Sites are first-come, first-served, and in the path of the totality.

What does this mean for RVers like you and I?

– If you haven’t already reserved a campsite, you most likely won’t find one or will pay scalper prices to
obtain one. Conventional lodging is even worse.

– Small towns in the path of totality are expected to be overwhelmed with those wishing to view the eclipse, which may result in fuel shortages and stores running out of groceries.

– The state of Oregon expects one million people to pour into the state to view the eclipse.

– Cell phone service providers are saying to expect sluggish service in or near the path of totality. Some are even erecting temporary towers.

– Traffic jams are expected to occur in the totality corridor by those attempting to drive under the path of totality the day of the event.

– State and National Parks have created solar eclipse viewing areas in an attempt to keep spectator vehicles from piling up on / along park roads to the point where emergency vehicles cannot operate.

If you still wish to camp within or near the path of totality, these are some strategies to consider:

– Travel to a destination within the path of totality several days in advance.

– If you can’t find a campsite in a campground, look for a place to disperse camp on public land (aka boondock). Those of you in the west will find hundreds of thousands of acres of public land to camp on. 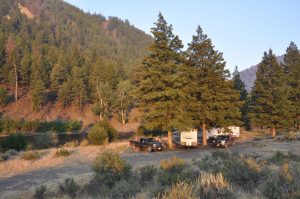 – Check out this link for an idea on where you can find free camping sites under the path of totality.

– Fuel up before making camp, this will assure you will have adequate fuel to drive out of the path of totality if fuel shortages occur.

– Stock up on sufficient groceries to last the duration of your stay plus a day or two.

– If you’re dry camping, make sure your fresh water is full and your holding tanks are empty.

– Once you have secured a campsite hunker down and wait for the event.

– If your schedule allows, delay your departure from your campsite until traffic has returned to normal.

August 12, 2045 will be your next chance to view a total eclipse having a similar path of totality over the U.S. It will occur approximately 250 miles southwest of the 2017 eclipse path while crossing between the Pacific and Atlantic coasts. Even better is that the duration of totality will last over twice as long.

Viewing a once in a lifetime event – just another great adventure in RVing!