You are here: Home / Top Stories / Stay Awhile at Devils Tower
This post may contain affiliate links or mention our own products, please check out our disclosure policy here. 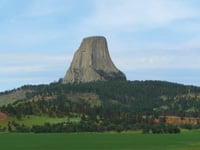 Devils Tower National Monument has always been among our favorite places in the national park system. We first visited it several years before it became well known as the location where aliens landed (and soon departed with Richard Dreyfuss, who was bored with his job and family) in the 1977 movie “Close Encounters of the Third Kind.”

An Overview of the Monument
Devils Tower, at 1,347 acres, is relatively small for a national park unit. Last year, it welcomed 395,000 visitors, approximately 10 percent of the yearly total at Yellowstone.  Many visitors arrive via tour buses that roar up the road to the visitor center and, after an hour or so, zoom out of the park.  These and many other travelers in private vehicles make a stop at the monument as a side trip while going to or from Yellowstone. 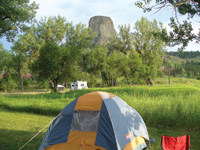 The tower is a giant monolith that soars nearly 900 feet above its base and 1,200 feet above the Belle Fourche River that meanders through the area. The monolith is igneous rock formed from the cooling and solidification of magma generated by volcanic activity.  The hexagonal columns that comprise the tower were formed as magma cooled and crystallized. The columns are separated by vertical cracks.  Once covered by sedimentary rock that was gradually eroded by wind and water, Devils Tower now protrudes upward, topped by a slightly rounded dome the size of a football field.  The tower is an impressive sight up close, and even more so from a distance as you drive toward the monument.

Long before a white man laid eyes on the tower, it was considered a sacred site to the native Indians, with each tribe having its own legend describing its origin. Most of the legends included a rock growing in size in order to protect Indians who were being chased by a bear.  As the rock continued to rise, the legends say, the bear attempted to claw its way to the top, where the Indians had retreated, thus the “claw marks” on the sides of the tower. Today the area is still considered a place for spiritual renewal by the Northern Plains tribes.

Activities for Visitors
So, what is there to do in such a small monument with only a solitary major feature?  After all, Yellowstone has waterfalls, geysers, canyons, mud pots, nine lodging facilities, multiple visitor centers, and more. Why stay more than an hour in the monument when there is so much to do in the much bigger national park on the opposite side of the state? 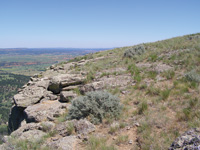 First of all, a lack of crowds and the resulting peace and quiet is in itself reason to visit and linger awhile. The monument has several trails, the most popular being the 1.3-mile paved Tower Trail that circles the tower’s base. Ranger-led walks along this trail offer a chance to learn about the geology, wildlife and plant life of the monument.  The three-mile Red Beds Trail begins near the visitor center and also circles the tower, but at a greater distance and through a different landscape.  A trail that is six-tenths of a mile connects the campground with the Red Beds Trail and visitor center. Overall, the monument has about eight miles of trails to keep visitors busy for a day or more.  Perhaps our most enjoyable experience was one year when we were camping at the monument during the night of a full moon. A ranger-led hike commenced shortly after sunset and ended in darkness when we walked over a hill to see a bright moon rising beside Devils Tower. What a memorable experience.

One entertaining activity is enjoying the action and sounds at the 40-acre prairie dog town. The monument’s black-tailed prairie dogs are in constant motion while chattering loudly with the approach of any intruder. The prairie dogs are protected in the park and it is unlawful to feed these feisty creatures. On one trip we were standing nearby when a little girl bent over a hole where she had seen a prairie dog disappear. Suddenly the prairie dog popped up, grabbed the little girl’s small doll, and pulled it down the hole, causing great surprise and considerable sobbing from the curious girl. 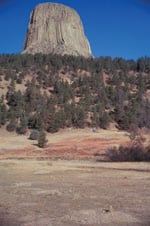 Devils Tower’s Belle Fourche Campground has always been one of our national park favorites.  It has 50 sites with facilities common to most National Park Service campgrounds, including flush toilets, a dump station, water availability, but no hookups.  It is in a grove of cottonwood trees that are gradually dying from lack of adequate water, due in part to upstream damming of the Belle Fourche River.  Still, it a pleasant place to camp and a number of sites offer a good view of Devils Tower. This is a first-come, first-served campground, but it has never been full when we have visited. Most campers stay only a single night, making mid-morning through early afternoon especially pleasant.  This is yet another reason to spend more than a day at the monument.  Visit nps.gov/deto for additional information about the monument.  We have posted a You Tube video of the monument at youtube.com/watch?v=coUYSNg7QOM.

For campers desiring hookups, Devils Tower KOA just outside the monument’s entrance gate has a pool, Wi-Fi, bicycle rentals, a snack bar and Kamper Kabins.  Sites can accommodate rigs of 100 feet with up to 50 amps of electricity.  There is also a section for tenting. For information and reservations visit koa.com/campgrounds/devils-tower.

David and Kay Scott are authors of Complete Guide to the National Park Lodges (Globe Pequot).  They live in Valdosta, Georgia.