You are here: Home / Columns / Fishin' / Staying Fit for Successful Fishin’
This post may contain affiliate links or mention our own products, please check out our disclosure policy here. 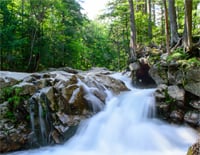 I’m one of those guys who always has to set goals. Back in the old days, when I competed in sports, I would keep track of my workouts including all the weights I lifted, my pulse recovery, and the miles I would run. I loved to improve and kept a careful record of the things that worked. Now, with my body going backwards, I have a different set of goals.

I’m trying to keep my upper body strong by pulling back on my hunting bow. When I go out to walk my dogs I carry the bow along to shoot a few targets and to keep my back, arms and shoulders fit to do the hunting and fishing that I enjoy. Mostly, however, I make sure I get in my walking.

Every morning, rain or shine, the dogs and I hike at least an hour or so. Sometimes we go on logging roads and other times we walk along the beach, searching for shells. Some days we hunt pheasants or quail for hours with lots of “ups and downs” through the brush. In all, we hike between 700 and a thousand miles a year. The idea is to keep fit enough to enjoy my free vacation time and doing the outdoor activities that I love. My main goal, however, is to be in good enough shape to hike to Crescent Lake, up near the Kenai River.

The lake is wonderful and is nestled in a bed of wildflower laden meadows, surrounded by mountains – a scene right out of The Sound of Music. The snow above would feed the turquoise-colored waters that make up the lake of my dreams. To top it off, the lake is full of the prettiest fish extant, opalescent long-finned grayling that are only found in far northern climes.

However, getting to this lake is not easy. You can charter a float plane and fly up in a few minutes, but this is my yearly test of “do I still have it?” and that plane ride would set my ego back a ways. So, my morning hikes prepare me for a good two-and-a half-hour climb up to the lake, and another hour-and-a-half back.

As if that wasn’t a big enough challenge, this time I had another duty. I was the designated fishing guide. In the past, we were led by a guide from Drifters Lodge in Cooper’s Landing. They would pack the heavier gear, take us to the best spots and set up our fly fishing gear. After we got the hang of it, our band was dependent on one of the members of my fly club for the fishing instruction. This year was payback time for them. One had to take his wife on a month long trip to Europe and the other was bringing his wife to Alaska a few weeks. So, this time it was my job to set up the gear for my sons Steven and Andrew, who are novice fly fishermen,  and their buddy Ford who only had a couple of outings throwing “feathers into the air.”

I brought a good collection of fly rods, a large assortment of flies, and would be in charge of setting up gear, and untangling messes. If we didn’t have much luck, it would be my fault!

While Crescent Lake is known for its fishery, it isn’t a sure thing.

Our first time up we’d had a bunch of fish tailing in the waters where a creek goes into the lake, but the last time we went we worked like dogs and only managed to hook one fish in three hours. So the pressure was on.

The hike up, as usual, was beautiful and tiring. Actually, I was the only tired one. The boys, enjoying their fitness and youth, easily flew up the hills, forded the little streams and worked up the rock piles. I lagged way behind, slow but steady, up the hills.

They were kind enough and would slow down every few minutes and wait for me to catch up. Naturally, I was far enough back to make easy pickings for any bear that might stroll by. In the manner of all fast hikers, they’d rest, wait for me to catch up, and then take off again. This gave me no rest at all. As soon as I got within hailing distance, off they went!

Finally, we reached the lake and by the time I staggered in they had unpacked the rods and were finishing a sandwich.

Right away, it looked better than last year. My son, Steven, spotted a couple of fish rising in the flowing waters where the little stream entered the Lake. We were in business, now all I had to do was figure out how to catch them.

Our first choice was to try a collection of dry flies. These are little fluffs of feathers made to imitate mosquitoes or aquatic insects. Floating on top of the water, you can actually see the fish rise up and gulp them, which is the best fly fishing! I put a different fly on each rod, an Adams, a Renegade, an Elk Hair Caddis, and a Pale Evening Dunn – all classics! Sadly, the fish quit rising and we didn’t have a bump. I was looking like one lousy guide. Then I switched us over to even smaller flies, which were nymphs that are designed to be fished just under the surface. It is estimated that most fish get 80 per cent of their food under water, so these sinking imitations can work really well.

I tried on a Pheasant Tail, Copper John, and a Humpy and had the boys cast away. Desperate for some success, I put a big Egg Sucking Leech, a monster of a fly that is long and black with a bright red Egg imitation in its mouth. This proved to be much better. In just a couple of minutes the boys were into fish. Ford’s indicator went under and he set the hook into a bright silver grayling of some eighteen inches. We all cheered as the first fish of the trip was landed on the shore.

The school of fish kept at it and soon everyone had landed one but me. They were fishing their nymphs a couple of feet under little floating indicators. These tiny bobbers held the fly at the right level as it floated out into the lake, when it went under, you set the hook.

With my big leech, I’d cast off, let it sink to the bottom and then bring it in, giving little jerks as I hailed in about six inches of line. The fish were jerking back! As soon as the line would flutter down, I’d feel a sharp pull. The problem was I was too uncoordinated and couldn’t manage to set the hook before the fish realized it wasn’t getting a real insect and   spit it out! Finally, one fish held on. I was the last one to bring a fish in, but appreciated it more.

After an hour of catching the bright opalescent wonders, we collected a couple each for dinner. I did the cleaning, and put out a plastic sack into the water to carry our catch back. To stop it from floating away, I put a two pound rock on the bottom. When I was done, we left the fish in the water until we packed up the rods, took off our waders, put on our hiking boots and began making our way back.

By the time we reached the car, I was pretty tired! My legs were getting a little heavy, but I still managed to jog the last few hundred yards, arriving just as the boys had finished another sandwich. I did get a little revenge. Back at the cabin when I took out the fish to fry them for dinner, I found that Ford had packed my two-pound rock all the way down from the lake! Sadly, he never even noticed the extra weight. Nonetheless, it made my fish taste even better. A good day for an old guide!