You are here: Home / Blog / Step Back in Time at Fort Laramie National Historic Site
This post may contain affiliate links or mention our own products, please check out our disclosure policy here. 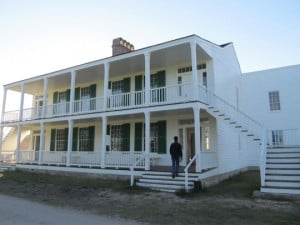 “Old Bedlam” was built in 1849 to house bachelor officers, and is Wyoming’s oldest documented building.

Over its lifespan of 56 years (1834 –1890), Fort Laramie truly experienced history in the making. Although it is best known as the largest military post on the Northern Plains, many important events and advances also took place here in southeastern Wyoming. At first, the Lakota (Sioux) Indians, trappers and merchants met at the fort to capitalize on the lucrative buffalo robe trade. A few years later, pioneers, missionaries, and gold prospectors stopped and traded en route to Oregon, California, and the Salt Lake Valley. Stage lines, the Pony Express, and the transcontinental telegraph passed through here, too, and the fort was also the site of several famous Native American treaty negotiations. Today, about a dozen restored buildings are open for self-guided tours, and most are refurnished to appear as they would have in their heydey. Ruins of another eight structures are still visible. Admission to the grounds and buildings is FREE. In the summer, living history reenactments and historic weapons demonstrations take place almost daily.

Over the years, Fort Laramie was known by a few different names. Originally established in 1834 as a private fur trading fort, the small stockade was first named Fort William in honor of its founder William Sublette. In 1841, that log fort was replaced by a new and larger adobe structure and called Fort John. The government purchased Fort John in 1849 for $4,000, and officially named it Fort Laramie. After a military presence was no longer needed, and trading had run its course, the post was abandoned and auctioned off in 1890. Although homesteaders bought and lived in some of the fort buildings, many deteriorated over the following 48 years, until becoming part of the national park system in 1938. Preservation efforts continue to this day.

Examples of the restored and furnished buildings you can walk through include: 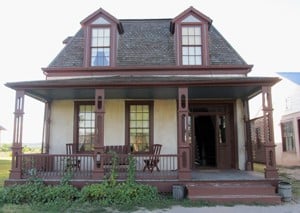 Lt. Colonel’s Quarters (Burt House): Built in 1884 at a cost of $4,730, Lt. Col. Andrew Burt, a 7th US Infantry officer, and his wife Elizabeth lived in the home from 1887-1888. The Burt’s furnishings were rather plain compared to the ornate décor used in most officers’ houses during the Victorian period. 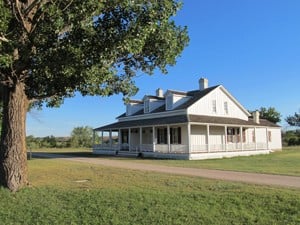 The Captain’s Quarters were constructed in 1870 by the Engineer Dept. of the US Army for an estimated $15,000. This two-story wood frame structure has a partial basement, stone foundation, and is split into residences with living and bedroom spaces, as well as kitchen and dining areas. 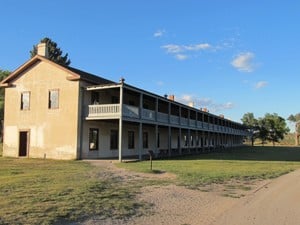 The Cavalry Barracks were built in 1874 for about $8,000. This two-story building has 42 rooms consisting of kitchens, dining halls, offices, sleeping bays, private bedrooms, and living spaces. It’s furnished to look like soldiers still live here and are expected to return any moment for their evening meal.

The park grounds are open from dawn until dusk every day of the year. The Fort Museum and Visitor Center is open daily (with the exception of Thanksgiving, Christmas, and New Years Day) at 8:00 am, with extended hours during the Summer, June through August. FREE admission.

Driving Directions:
From Interstate-25, take exit 92 to U.S. Highway 26, proceed east to the town of Fort Laramie; turn right on State Route 160 and travel 3 miles to the park entrance.

From U.S. Highways 26/85, proceed west from the town of Lingle on Highway 26 to the town of Fort Laramie; turn left on State Route 160 and travel 3 miles to the park entrance.