You are here: Home / Top Stories / Prevent Blowouts By Monitoring Your RV Tires
This post may contain affiliate links or mention our own products, please check out our disclosure policy here.

Let’s call them Ann and Carl. Rolling down a California interstate, Ann detected a flat tire. Carl steered the rig off on the next exit and checked his tires.

Flat tire wasn’t the word for it—anything remotely resembling rubber was wrapped around the axle and what was left of a wheel had ground a track in the pavement.

The companion tire on the forward axle had been “shot through” with tire cords. In the end, a new wheel, two new tires, and brake damage took plenty of time away from the family vacation and left a considerable dent in the budget. 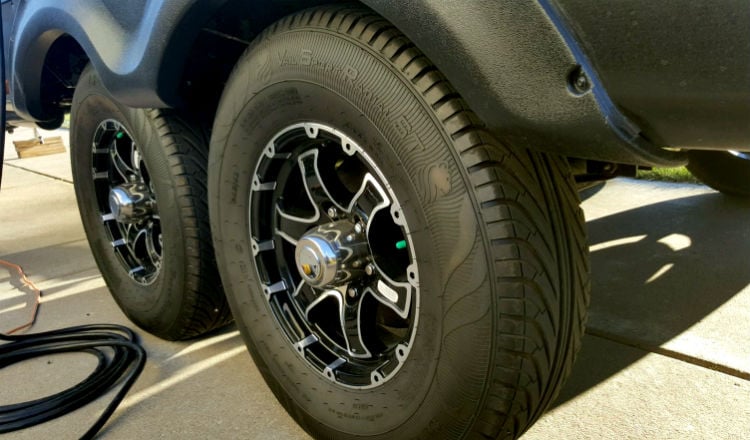 This couple probably got off easy. The National Highway Traffic Safety Administration says tire blowouts cause more than 400 deaths and 78,000 crashes each year. Reducing those numbers is the job of a tire pressure monitoring system (TPMS). Federal law mandated TPMS in passenger vehicles sold in the U.S. since 2008.

But what about your RV? There’s no mandate and it’s pretty likely your tires aren’t going bald—but they are bare in terms of this kind of protection.

Many RVers are the model of efficiency when it comes to tire safety. Tire gauge at the ready, they’re first in line to check pressure before they pull out in the morning. However, things can happen. 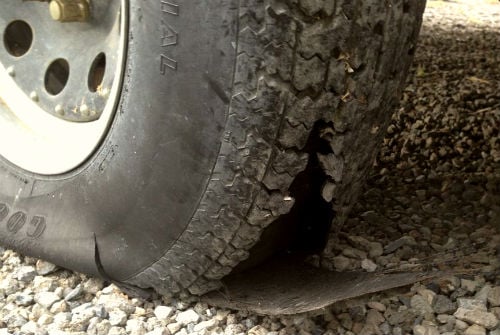 A tire monitoring system will set off a warning signal, allowing time to find a safe place to pull over before the tire blows.

An aftermarket TPMS puts a pressure sensor on every wheel, each transmitting data to a dash receiver. Most sensors measure not only tire pressure, but also tire temperature – an important factor for a tire that could go critical.

“Temperature reporting is just as important – maybe even more so – than pressure sensing,” says Covington. “A bad bearing, a hanging brake caliper, a manufacturing defect in the tire, and heat can lead to catastrophe.”

For example, a tire on your motorhome may be at a safe working pressure but could start to separate. Tread separation usually results in the dreaded “blow out,” but before that happens, tire temperature soars. A TPMS will set off a warning signal, allowing the driver time to find a safe place to pull over, inspect and replace the tire before it blows.

Receiving units are “trained” to recognize each individual sensor so the driver will know exactly which tire is under-pressure or overheated. This training is generally quick and easy and only has to be done on initial installation. However, check ahead of purchase to ensure you can do-it-yourself, or ascertain the cost of programming.

Choosing a system for your RV tires

Pressure sensors can be mounted in different places. Some systems use internal sensors mounted inside the wheel (requiring the help of a tire service shop). Here the sensor is protected from damage or theft. Since most TPMS sensors utilize batteries for power, when an internal sensor battery reaches end of life, the sensor must be removed and either replaced or sent back for refurbishing.

Factor in the cost of refurbishment when making a choice, and be satisfied the company you buy from will still be around when the batteries die. Buying a system from a “fly by night” outfit that puts together kits culled from parts from different manufacturers is risky. 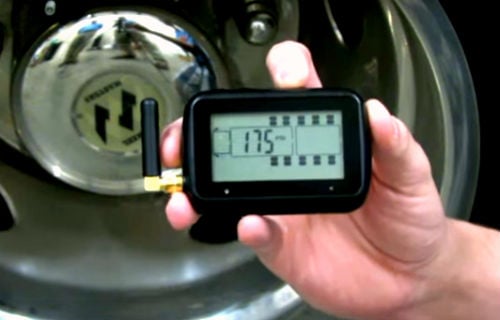 A TPMS monitor typically displays the tire pressure for each tire

External sensors (sometimes called “flow-through sensors”) are typically user serviceable. Some come with lock systems to reduce theft risk. These screw onto the end of the tire valve.

By nature of their size, the batteries in these sensors are small but aren’t expensive. Flow-through or internal system, either way, make sure the system you buy will allow for all the tires you need to monitor, including those on a toad car. As you add more sensors, the system price goes up.

A TPMS monitor typically displays the tire pressure for each tire—and better ones indicate temperature, also. Some are battery operated and require being “plugged in” to charge.

Others optionally hard-wire into the rig’s electrical system. If you’re handy and can wiggle under the dashboard, it shouldn’t be too difficult to do the hard-wire—no worries about forgetting to recharge the monitor that way.

Rig size can factor into your system choice. Towables are generally a short enough combination for most systems, but large motorhomes pulling a trailer can be problematic.

Signal transmission range from the tires to the receiver varies between systems. For longer combinations, you may need a repeater unit. This amplifies the signal, allowing even huge rigs like semi-trailer monitors to reach the most distant tires. 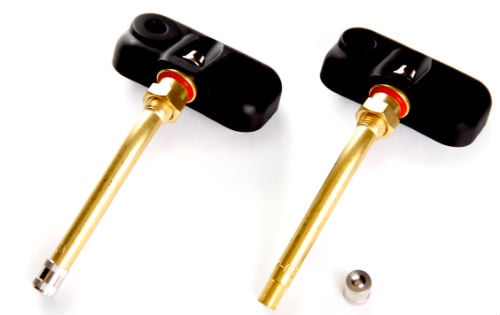 The internal sensors of a tire monitoring system.

How often the sensors report tire information is important. Many sensors transmit pressure and temperature information every few minutes, giving a relatively real-time report. Any system you buy should INSTANTLY report any change that exceeds safety limits, allowing you time to react before a critical failure.

TST Truck Systems Technologies offers a monitoring system to fit nearly every need. Many RVers install the 507 system –transmitting both tire pressure and temperature, reporting to a handy monitor panel. It plugs into a 12-volt lighter socket or is optionally hard-wired into the vehicle.

Sensors offer a choice of either owner-mounted flow-throughs, or the internal style (which have a typical battery of life of seven years). Both easily pair to the monitor in just a few minutes.