You are here: Home / Blog / Stop in Oregon’s Smallest and Highest Incorporated City
This post may contain affiliate links or mention our own products, please check out our disclosure policy here. 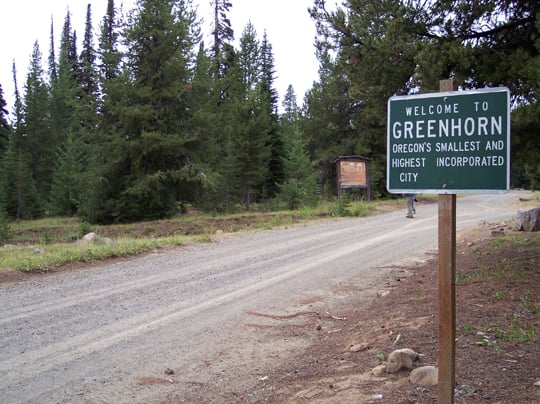 If you enjoy off-the-beaten-path ghost towns that still have an interesting claim to fame, then stop in Greenhorn City the next time you’re exploring the Blue Mountains of Eastern Oregon. As you arrive, you’ll see a sign proclaiming it to be Oregon’s smallest and highest incorporated city. The claim is true. This 60-acre mountain town’s elevation is 6,306 feet above sea level and it sure is tiny. Truth be told, there’s not much of anything and not much of anyone to see here, except for some cabins and another sign explaining the town’s historic 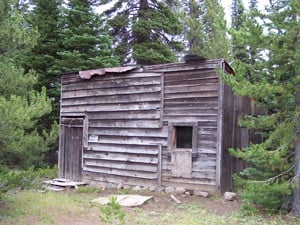 significance. According to the census of 2000 and 2010, there were no people living here. However, it was rumored that a couple of years ago Greenhorn City became home sweet home to two year-round residents. In the summer (roads are impassible in the winter except by snowmobile), you may see one of the 20 or so part-time residents that own recreational property here.

The real attraction is the town’s history. It was first established as a remote camp in 1891 when miners prospected for gold in the area. As the story goes, the name “Greenhorn” came about because two young men from the East who knew nothing about mining happened along hoping to find their fortune. An experienced miner decided to play a joke on the men and recommended that the greenhorns start digging for gold on the side of a mountain

outside of camp— not in the known gold-bearing areas. They followed his advice. Whether it was beginner’s luck or divine intervention, the newbies discovered a gold-laden chunk of rock richer than anything found before! They filed their claim and it became known as the “Greenhorn Mine.” Over the years, the mountain camp steadily grew into a real town of 500 people that also served about 2,000 miners in the surrounding area. In its heyday, Greenhorn City boasted two hotels, three general stores, five saloons, a city hall, post office, jail, redlight district, and a weekly newspaper. The city was incorporated in 1903 and continued as a viable community until 1942 when gold mining ceased because it was deemed a non-essential activity during World War II.

Surrounded by tamaracks, Ponderosa pines, and fir trees, Greenhorn City is certainly scenic and serene. The only sounds might be that of resident 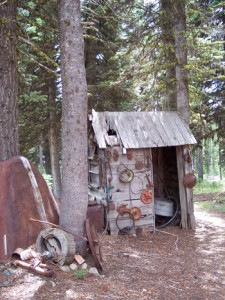 pine squirrels and birds. When you stop, remember that the land and structures inside the city limits are private, so don’t trespass. But do enjoy knowing you’ve set foot in Oregon’s smallest and highest incorporated city. Check it off your bucket list!