You are here: Home / RV Lifestyle / Stories From The Road: Meet This Digital Nomad RV Couple
This post may contain affiliate links or mention our own products, please check out our disclosure policy here. 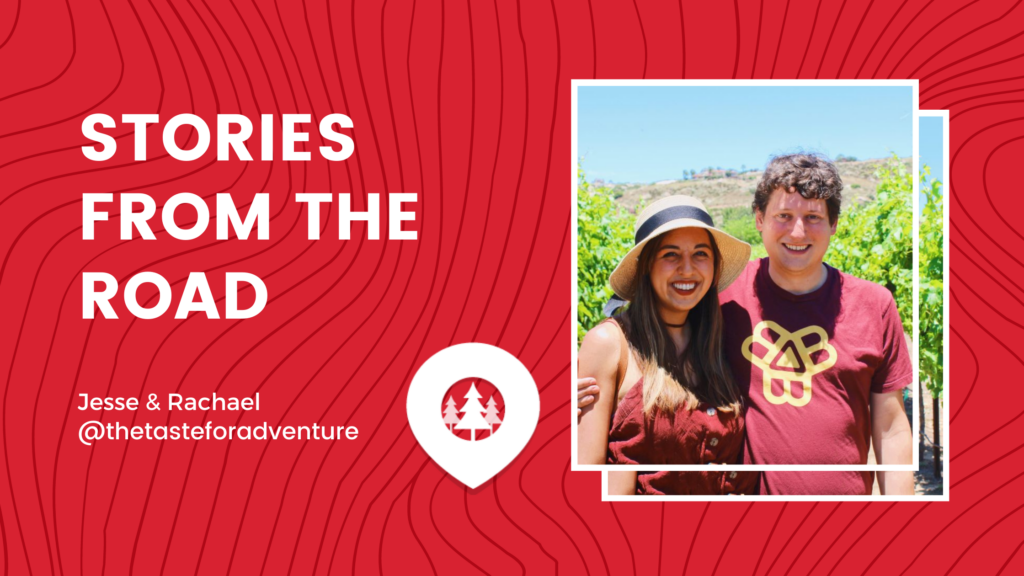 They Have a Taste for Adventure

Meet Jesse and Rachael, the faces behind @thetasteforadventure. This full-time RV couple lives in a 2002 Keystone Cougar fifth wheel with their dog, Lyra. They are passionate about being a helpful resource to people who are interested in RV life or who are currently living life on the road.

Since hitting the road in November 2018, this full-time RV couple has been traveling the U.S. in search of tasty food and beer. Life isn’t just beautiful hikes, sightseeing, and beer tasting though. Before they hit the road, Jesse and Rachael had a lot of work to do like renovating a used RV and transitioning from office jobs into fully remote positions.

Everyone has unique reasons for choosing the RV life. For some, it’s the thrill of the open road. Others want to pay off debt. For this RV couple, wanting to make a change and move were two motivators. However, living in downtown Boston made moving tricky. For a 2 bedroom, 2 bathroom condo in their preferred area, there was a price tag attached of over $800,000! (And that didn’t guarantee parking.)

Another contributing factor was the familiar pinch of not enough vacation days. According to Patriot, the average employee has only 10 paid vacation days off per year (after 1-5 years of service).

This tricky combination of having family scattered across the country and the limited time off meant that Jesse and Rachael needed to find a creative way to balance their love of travel and family obligations. They said that when they looked back at their vacation days at the end of the year, sometimes only 1 day was spent on themselves! The rest of the time off was used to see family.

At the end of the day, Jesse and Rachael wanted to pursue their love of travel, make a home for themselves, and see their family. So in 2017, they got the idea of move into an RV and mix all three! RV life meant that they could drastically lower their cost of living. It also would allow them to travel and see family. 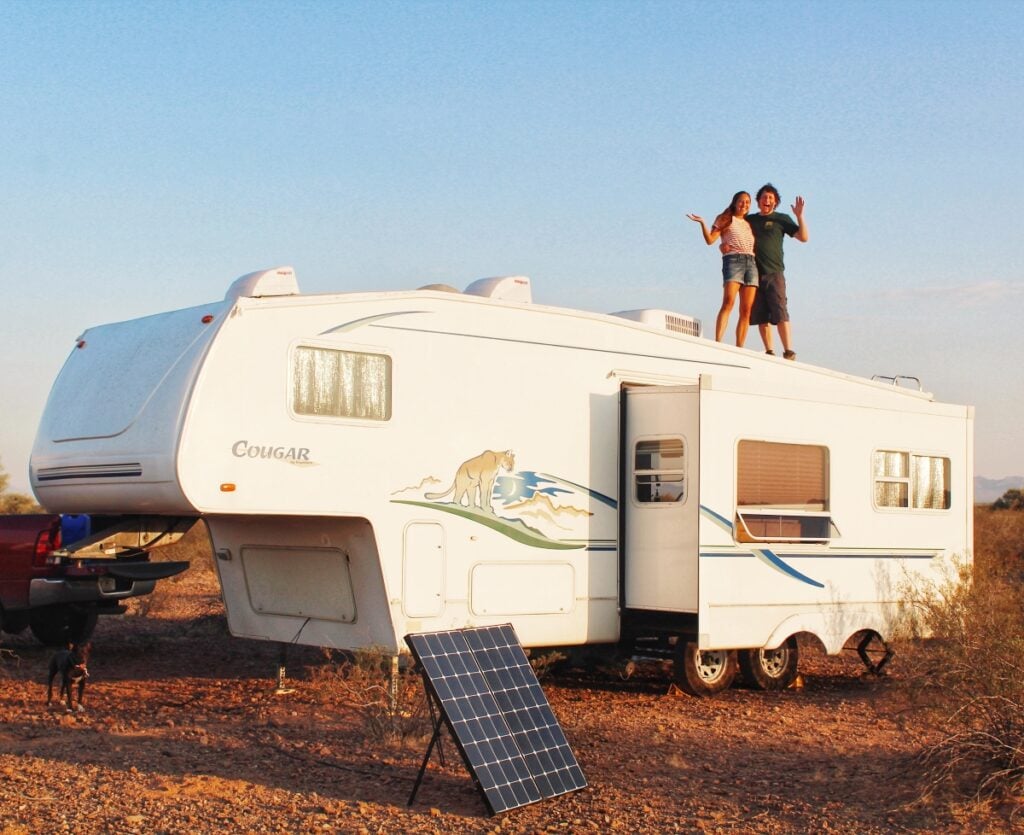 Should you buy an RV with no experience?

This question comes up a lot in RV forums. People ask if they should buy an RV and jump into RV life without testing the water first. The typical response from advice givers is that you should rent an RV first. Jesse and Rachael didn’t do this.

Even though they had no prior RV experience—Jesse had only been in one RV in 1992—they jumped right in. In a sharp contrast to their Instagram feed that is full of scenic hikes and beautiful boondocking spots, these two were self described “city people.” They weren’t campers and had never been camping as a couple.

“Some people dream of RV life for a long time, we didn’t do that. We had the idea and started shopping within a few weeks.”

Luckily, there is a wealth of information online. Soon after having the idea to move into an RV, they found the RV life community on Instagram. In order to prepare for their new lifestyle, they spent a lot of time watching videos and reading a lot of advice from seasoned experts. Their favorite Youtuber to watch was Less Junk, More Journey:

Within weeks of having the idea, they attended a local RV show to check out the floor plans. In June of 2018, just 6 months after getting the idea, they purchased their fifth wheel. Jesse and Rachael bought a 2002 Keystone Cougar fifth wheel. At 29 feet long, it was in immaculate original condition… but needed a major facelift!

This RV couple scored big on their new-to-them fifth wheel. Despite being close to 20 years old, the unit was in “pristine original condition” with the original upholstery and carpeting.

Over the summer in 2018, they renovated their new RV to make it their own. While living in downtown Boston, the RV was stored in Portland, Maine. Every Friday after work, they would drive the 2 hours to where it was stored, then stay and renovate it all weekend.

The first 2 weeks included very thorough demolition and removing all the various floral patterns. The next big project was removing and replacing all the flooring. For this project, they installed laminate boards. Jesse said that if they were doing it again, he would choose something easier to cut. Unfortunately, he quickly learned that RVs have a lot of weird corners and installing flooring became “the puzzle from hell.”

Other renovations included painting everything, replacing the furniture, removing some kitchen cabinets, and replacing the bathroom vanity. Later on, they also designed a custom sofa with a custom dog crate for their dog, Lyra.

Two years after living in the unit, they have recently updated the kitchen. Jesse created custom counters and they finally replaced the kitchen sink.

Having the freedom to take design risks

Prior to RV life, this couple had always rented their living spaces. Because of this, they had never had the desire to invest too much into home décor.

When they moved into the RV, Rachael said that she they didn’t worry about the resale value and decided to take design risks. Jesse echoed this sentiment and said that because it’s such a small space, there is a lot of flexibility. If you don’t like the cabinet or wall color, you can simply repaint. 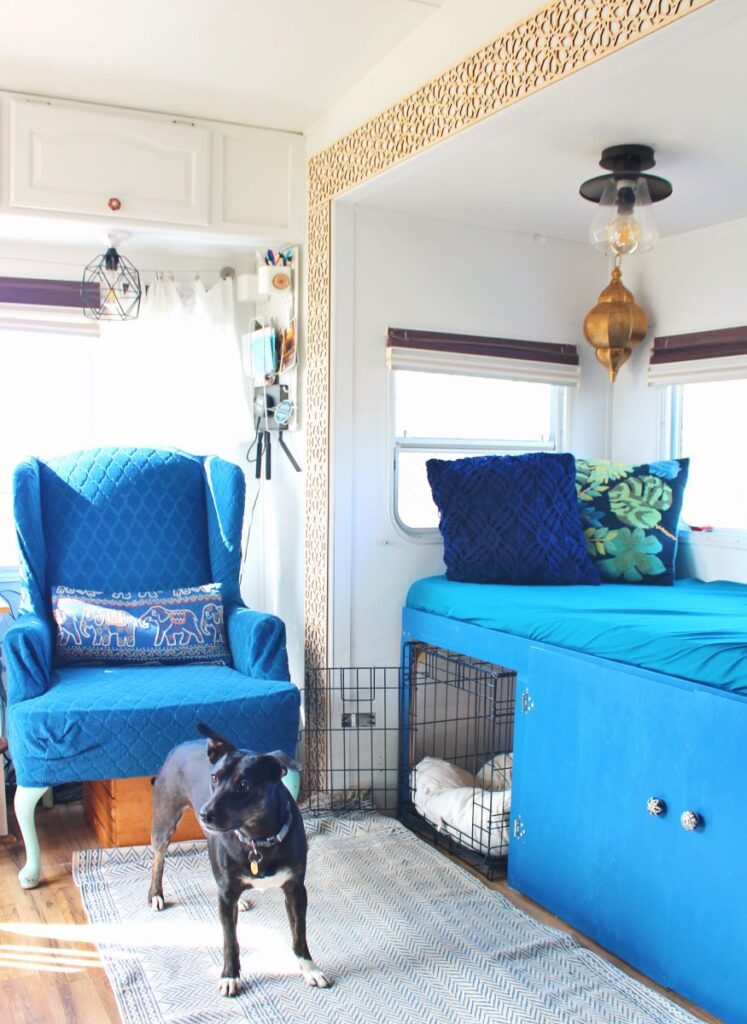 Lyra and the custom sofa. Photo by @thetasteforadventure

Rachael describes their design style as “colorful” and inspired by their previous travels. She was inspired by the aesthetics and home decors that she had seen internationally. As well, they sourced a lot of pieces from Etsy (one of Rachael’s favorite sellers is RamaHomes) and international sellers.

In order to successfully become a full-time RV couple, Jesse and Rachael needed to transition to the digital nomad lifestyle. These two both worked in marketing in Boston. Prior to going remote, Jesse and Rachael made a deal: If one of their bosses said “no” to remote work but the other said “yes”, that wasn’t going to hold them back. Whoever was told “no” would quit and they were still going. They told me this was a helpful negotiating tactic, but definitely use it with caution if you want to do the same!

Luckily, this was not an issue and both companies said yes. Rachael had a long tenure at her company and so they said yes, but only for her. Jesse was basically already working remote. He worked exclusively for the company’s team in L.A. so him wanting to be on the road in an RV was no problem. 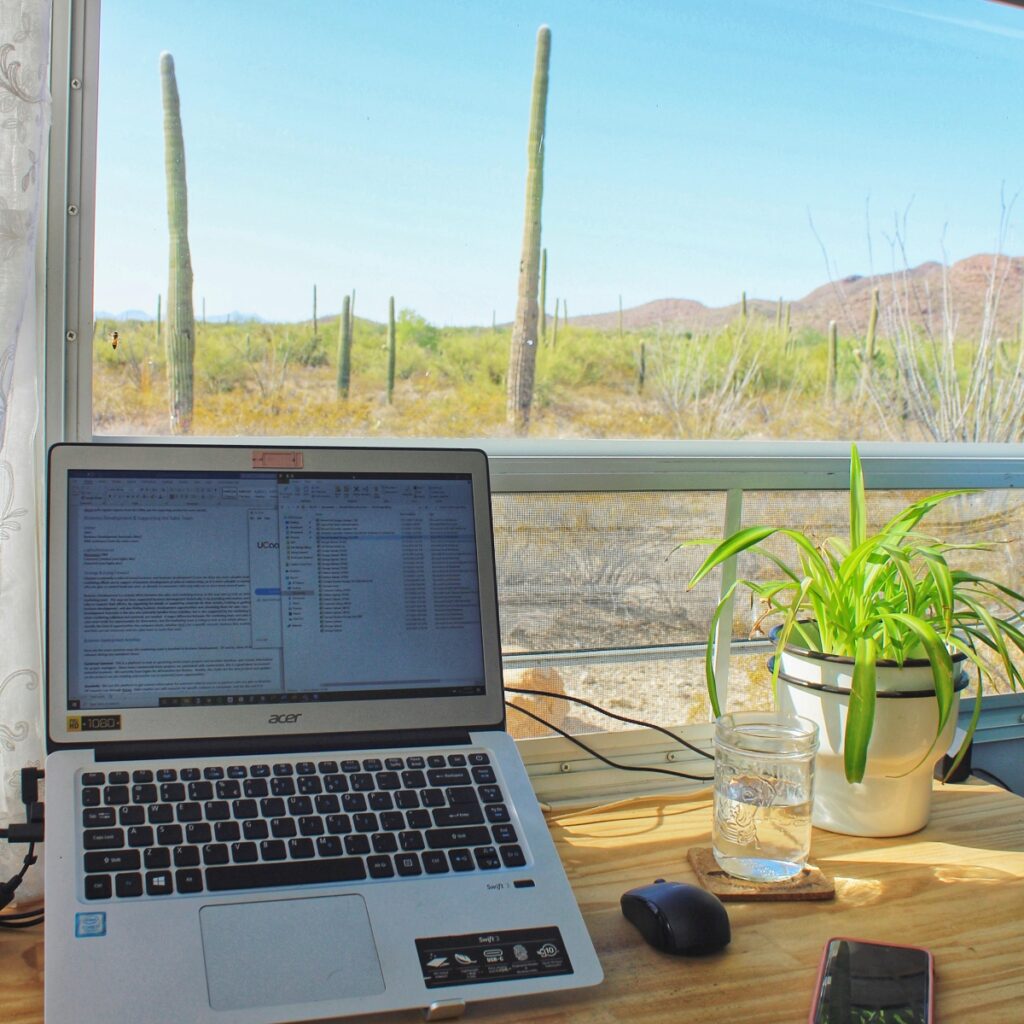 Rachael’s favorite renovation is their desk under the big rear window. Photo by @thetasteforadventure

Now, Jesse is still with his original company. He works a normal schedule for the West Coast office no matter where he is. Rachael recently made the jump and opened her own agency, Next Destination Marketing. Rachael said that she wouldn’t have started the agency if not for RV life. The desire to have even more freedom was enticing.

Remember how Jesse and Rachael used to struggle with not enough vacation time? Well, now they have the opposite problem! Being digital nomads in an RV means that they can do fun stuff right outside their front door as soon as work is over. Now they can go for a hike right after work. Their favorite hike and National Park: Panorama Trail at Yosemite National Park. 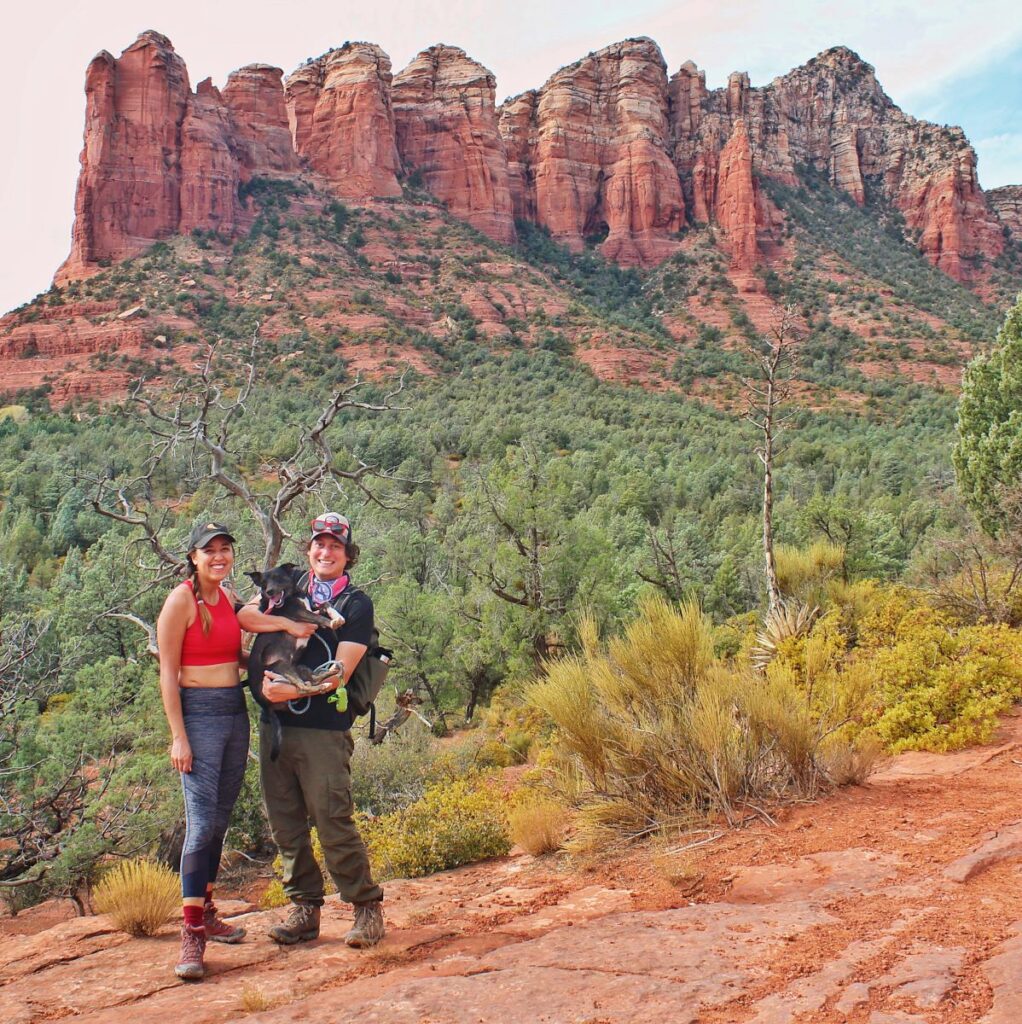 Jesse and Rachael have an inspiring RV journey. From downtown marketing executives to a full-time RVing digital nomad couple, their Instagram is filled with inspiration, practical advice, and they even share the not-so-glamorous parts of living in an RV.

Curious if this is the life for you? Check out 10 Signs That Full Time RV Living Is Right For You.