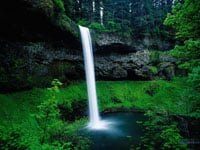 A new Oregon State University study of state parks along the Oregon Coast has concluded that park visitors have an economic impact on the area that adds $371 million in direct and indirect sales. The infusion of dollars from visitors leads to $115 million in labor income affecting nearly 6,000 full and part-time jobs.

“The work by OSU confirmed our belief that state parks are not only important in their own right, but also generate value and wealth all along the coast,” said Tim Wood, Oregon Parks and Recreation Department director.