You are here: Home / Top Stories / Superb Oregon Parks
This post may contain affiliate links or mention our own products, please check out our disclosure policy here.

We all love to hit the road, traveling to new vistas and wonderful sites, such as our national parks. But, one of the great things about living in the Pacific Northwest is the access to splendid state parks. For me, a third generation Oregonian, Oregon state parks offer destinations that are gems in themselves. 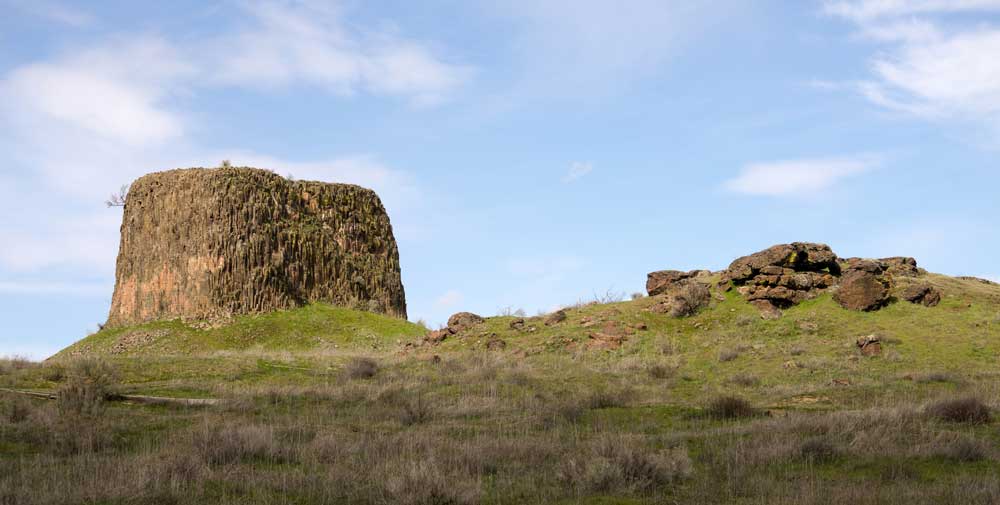 Distinctive Hat Rock was the first landmark passed by the Lewis and Clark Expedition on their journey down the Columbia River. Photo via Shutterstock Standard License

Oregon’s State Park system—one of the most popular in the US—records more than 46 million visits annually. Many of the visits were to the numerous day parks and historical sites that are scattered throughout the state, such as Hat Rock State Park along the Columbia River in eastern Oregon. Hat Rock was first mentioned in Lewis and Clark’s journals, and today the park offers wonderful picnic sites, access to the Columbia River, and insight into what the members of the Corps of Discovery saw on their way to the Pacific Ocean.

Probably the best-known Oregon parks are those interspersed along U.S. Highway 101, an All-American Road designated as the Pacific Coast Scenic Byway. At the northern end is Fort Stevens State Park, which is part of the Lewis and Clark National Historic Park, a joint project of the National Park Service and the states of Washington and Oregon.

As you head south along U.S. 101, each turn brings a breathtaking view of the coast and plenty of great campgrounds. One of my favorites is Beverly Beach State Park, just north of Newport, the largest city on the central Oregon coast. The park offers large campsites, full and partial hookups, even cable access. And just south of the park is Newport, with shopping, the Oregon Coast Aquarium, and access to beaches and deep-sea fishing. Many more gorgeous parks await the drive to the California border. Quite literally, there are too many day-use sites and campgrounds along the coast to list in this article, but each awaits you to explore and enjoy.

Moving inland brings new adventures. The largest park in the Oregon system is just east of Salem, the state capital. Silver Falls State Park has 9,200 acres of wonder, with hiking trails that lead to dozens of waterfalls. The campground is well off the main road, making it quiet, and it has many campsites that are very private. As with the campgrounds on the coast, Silver Falls is open year-round. 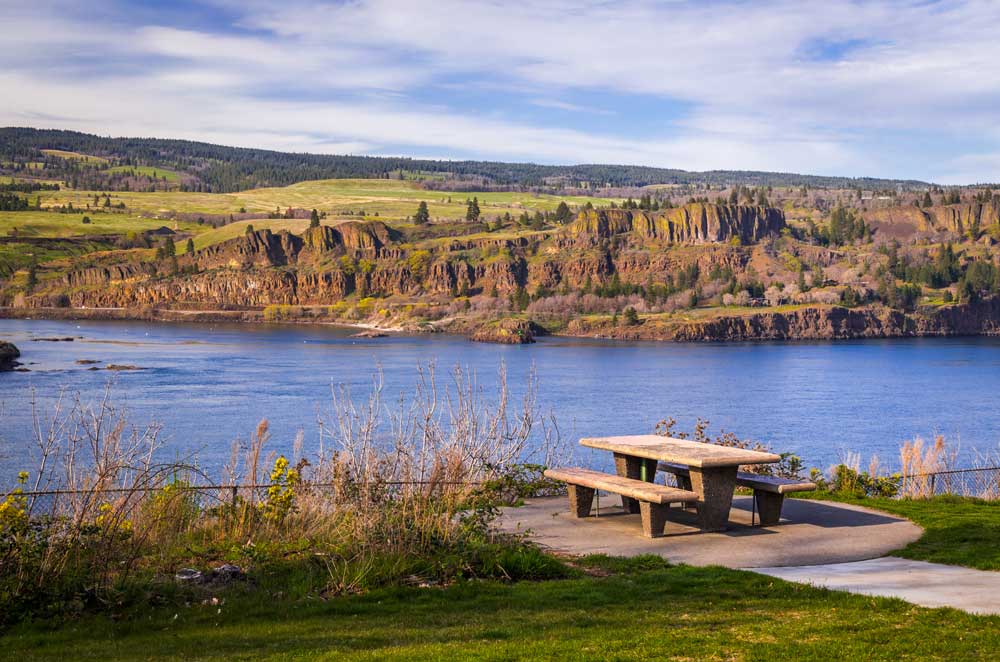 Memaloose State Park in Oregon is named for an island in the middle of the Columbia River that is a Native American burial site. Photo via Shutterstock Standard License

Stay west of the Cascades and you will have more state parks than you can explore in an RV in a year. But most of Oregon lies east of the Cascade Mountain Range and deserves the attention of more than local Oregonians. You can travel over the mountains and camp at state parks such as Detroit Lake State Park resting in sight of Mt. Jefferson, or meander up the Columbia River Gorge National Scenic Area, with more waterfalls, great museums, and several beautiful state parks to camp in. One of our favorites is Memaloose State Park, named for an island in the middle of the Columbia River that is a Native American burial spot. The campground has open, but well-spaced campsites, with partial hookups and a dump station. The explorer who leaves this peaceful park can discover wonderful scenic viewpoints, numerous hikes and even wineries nearby.

Once you reach the “dry side” of the state, there are plenty of campgrounds to choose from. Four of our favorite places to camp are in The Cove Palisades, Tumalo, La Pine, and Collier Memorial state parks, all in central Oregon in the vicinity of Highway 97. The northernmost is The Cove Palisades, which has two campgrounds (one of which is open year-round). Three rivers come together here, behind a dam, making it a boater’s paradise. The Metolius, Crooked and Deschutes rivers flow into Lake Billy Chinook, nestled in deep cliffs, creating colorful canyons and marvelous viewpoints.

Tumalo State Park is a scant six miles from downtown Bend, the largest city east of the Cascades. The park has both a day-use section along the Deschutes River as well as a wonderful full hookup campground protected by lava walls.

One of the largest campgrounds east of the Cascades is at La Pine State Park, and it is also open year-round. There are full and partial hookup sites well placed in the Ponderosa pine forest. Also in the Ponderosa forest but farther south, past Crater Lake National Park, is Collier Memorial State Park. It is known for its historic logging museum. 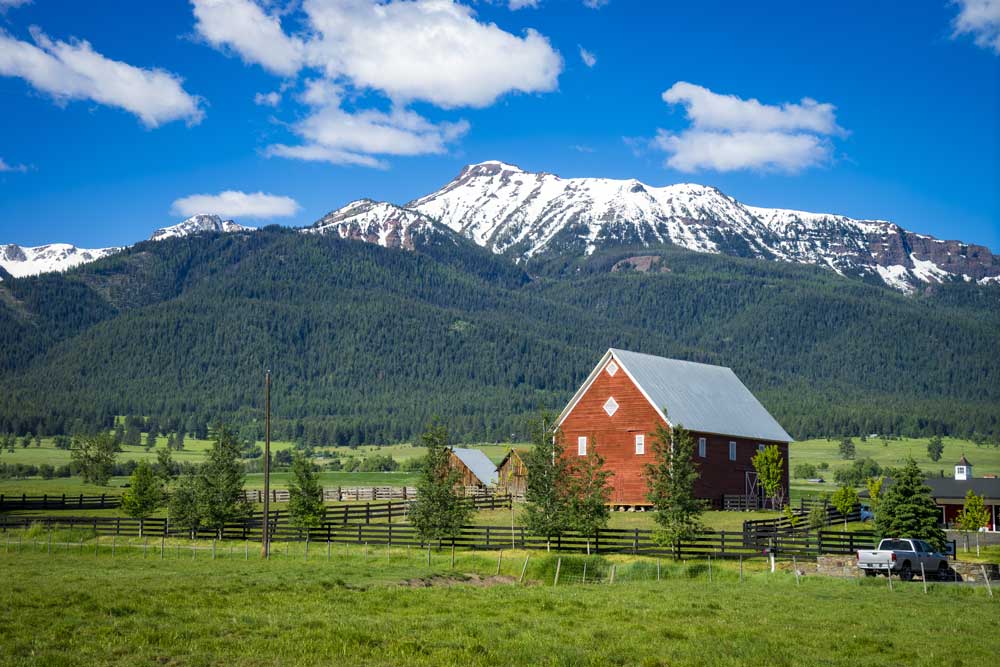 But, having saved the best (well, our favorite, at least) for last, the reward for traveling to the far northeast corner of the state is Wallowa Lake State Park. To access the park, drive your RV from the city of La Grande to the Wallowa River Valley and breathtaking views of the Wallowa Mountains and Eagle Cap Wilderness. From the quaint artistic town of Joseph, the road leads along a glacial moraine cut just above a beautiful lake that was created 10,000 years ago by a glacier. Snowcapped mountains form a backdrop to the lake and the campground. The campsites offer full hookups. The lake provides fishing and boating, and there is a beautiful private lodge on the south shore. You can go hiking and horseback riding or take an unbelievable gondola ride to the top of Mt. Howard for a view of not merely Oregon, but also into Washington and Idaho.

As an Oregon RV traveler, I look forward to traveling to many places outside my home state, but for my weekend getaways, nothing beats my own Oregon state parks.