You are here: Home / Blog / Enjoy Remote Camping? Support Public Land Use
This post may contain affiliate links or mention our own products, please check out our disclosure policy here. 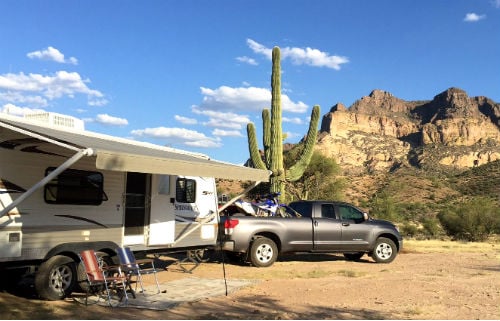 For those of us that are U.S. citizens, it’s that time of year again to get out and vote. Some of you have probably already made up your mind. However, many more of you are most likely undecided.For those who are undecided, I encourage you to look at the candidate’s stance regarding public land use.

As an avid RVer, public land to recreate and disperse camp is very important to me. It should be to you too. However, how do you know the candidate’s position on public land as it’s seldom, if ever, mentioned during their campaign. The method I use to determine their current position is to look at what groups have endorsed the candidate.

For starters, any group that supports wilderness areas is against the use of RVs, motorized recreation and sometimes mountain biking. You can always learn more about  congressional approved Wilderness designations and I encourage you to do so.

As you will see, wilderness does not support RVing. When set in motion in 1964, the Wilderness Act is now being used to close lands that really don’t qualify. This means banning recreationalists from their favorite places.

Using the Antiquities Act of 1906, the President can easily lock up huge amounts of public land by designating a new national monument.  National monuments have a whole different set of rules on the land you and I use. As you see, those holding federal office can greatly influence how we all recreate on our public land.

On the state level, you will want to check out who is supporting the Governor and Public Land Commissioner. These two positions  greatly influence what activities the public can enjoy on state land. Once again, groups that support wilderness, conservation or wildlife are looking to restrict you and I from RVing on state land. This is important for adventurous RVers who enjoy all of the adventures on America’s public lands.

Vote and Take a Stance on Public Land Use

The same goes for local/county candidates. This is especially true regarding the potential county commissioner’s stance on public land use. Are they ready to stand up for you when federal officials want to prohibit motorized access to your favorite camp? Or, will they readily comply?

RVers are thankful for our public lands. And, regardless whether you are a veteran RVer, dirt biker, or snowmobiler, I urge you to get out and vote for the candidate that supports the use of public land by all user groups.