You are here: Home / Top Stories / Taking the Train to Virginia City
This post may contain affiliate links or mention our own products, please check out our disclosure policy here. 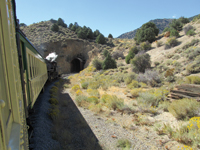 Old steam locomotive 18 puffed and belched out smoke while it prepared for the trip through the mountains of the Comstock Lode. As the crowd gathered to board the train, shots rang out. Startled passengers saw a marshal fire his gun at a cowboy carrying a bag full of silver. The thief collapsed in a conveniently placed chair, while the marshal reclaimed the bag of Comstock silver. It was just a bit of entertainment for the passengers at the Carson City depot of the Virginia & Truckee Railroad.

The Virginia & Truckee Railroad does not go to Virginia or Truckee but it does link Carson City to Virginia City in Nevada, and what an exciting train ride it is.

The railroad was started in 1869 and served about 200 mines over the next 80 years, bringing in supplies to keep the mines going, and carrying out gold and silver ore to be processed. The line shut down in 1950, but was revived for tourists nearly 60 years later. The Nevada Commission for the Reconstruction of the V&T Railway held a “silver spike” ceremony in January 2006 in Carson City, and ran its first train again in August of 2009. From May to October, it takes riders on a 20-mile trip through mining country.

As the train rolls along, the conductor explains what you are seeing, and tells stories of the mining era and its villains and heroes. You learn that the name given to the Comstock Lode started out as a joke about Henry Comstock, who was apparently a bumbling, stupid man, but a good liar. Anytime a miner struck gold or silver, he’d insist they were on his grazing land but agree to a partnership, then race to file a claim. He wasn’t bright enough to keep his mouth shut, and his braggadocio did in his claims to riches. He sold his “claims” to set up a store, and failed at shopkeeping, despite the great demand for goods. He died poor, but the richest mines ever found on the continent still bear his name. 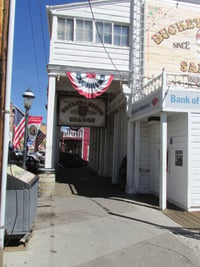 The train ride takes about an hour and a half. There are ruins peppering the landscape, including those of a cyanide plant that was the largest concrete structure anywhere until the Hoover Dam was built. One learns that cyanide is not just used to make suicide pills for spies, but was a critical part of the ore extraction process. The remains of a town are nearby and one can only shudder at the thought of raising children next to a cyanide plant.

One of the delights of the trip is spotting herds of wild mustangs that roam the area. The horses make their way from Virginia City over the sagebrush to the watering holes, and then go back to Virginia City at dusk where, it is said, they delight in the green grass of the area’s golf courses. Sometimes if the horses are close, the train will stop for a few moments so passengers can get good photos.

The cars, which carry 72 people each, are comfortable without being luxurious. The Pullman cars date back to 1914, as does the steam engine. The engine and cars are celebrities, having appeared in movies such as Water For Elephants. There is no air conditioning, but the altitude and breezes keep it comfortable with the windows open, at least until you go through one of the tunnels on the way. For a few seconds, steam and the smell of a locomotive permeate the cars through open windows as the train passes through the unlit tunnels. No one seems to mind.

The ride is so entertaining that it is over before you are ready to disembark. Fortunately, you have arrived at Virginia City, a most appropriate destination for a mining train. 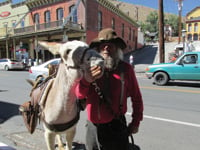 Virginia City has needed no reconstruction. It has remained a vital, lived-in, busy western town even though the year-round resident population has shrunk since mining days from 15,000 to 1,000. Tourists, up to 400,000 a year, make up the difference.

The wooden sidewalks have been maintained, and the old false-front western buildings have been lovingly cared for. This town may be full of tourists, but it is real, not a theme park.

The Bucket of Blood Saloon has remained in continuous operation except for a short rebuilding period after the Great Fire of 1875. It got its colorful name because it was so rowdy that in the morning when its floors were mopped, the bucket of water became bloody from the fights the night before. At the Washoe Club, another Old West thirst parlor, there were so many tough old prospectors becoming millionaires they formed an “exclusive” Millionaires Club upstairs. There are reportedly still bullet holes in the ceilings from arguments over poker games.

There is a 20-minute trolley ride through town that can turn you into an instant local, so it is a good way to start the three-hour stopover in Virginia City. There is an old mine you can tour, or a mock-up of one in a bar, depending on how far you want to walk, and how authentic an adventure you want. The entire town overlooks the very real and scary looking mine operations in the valley below. Some of the mines have become operational again since the increase of the price of gold and silver and new ways of working tailings are discovered.

Start of Literary Career
The town is full of museums, but one is a special delight for Mark Twain fans. Samuel Clemens came to Virginia City in 1862, the height of its glory days, and got a job as a reporter for the Territorial Enterprise. He cut his teeth on reporting in Virginia City. He also began writing down the tales of the miners, including some famous liars. It was here he heard the tale of the Jumping Frog of Calaveras County and turned it into a story beloved by the entire world. It was also in Virginia City he began to use the pen name Mark Twain.

After two years he had had it with mining, with woes of reporting and its critics and he left for San Francisco. There is a local legend that he left because of a proposed duel (some critics are fiercer than others) but the people at the museum say no, he had his ticket in hand before that. What you will see is an old time newspaper, printing office, his desk, and his commode, the only plumbing available then. He may have sat there, but you cannot.

Twain was not the only reporter to have caused a ruckus in Virginia City. The one who made up the camel races, perhaps inspired by Twain, also had a gift for fiction.

At one time there really were camels in the area. Jefferson Davis, before the Civil War when he worked for the U.S. Army, thought camels would be handy for soldiers in the desert. He got $38,000 for the experiment and spent it on acquiring camels. But the camels bit and spit at their handlers (who clearly could have used some lessons from the Bedouins) and even worse, they spooked the horses. The Army declared it a failure and auctioned off the unruly camels to Otto Cash, who brought them to Nevada to work in the mines. He discovered an additional problem—Nevada rock was too hard on camel hooves so he set them loose. They became a local nuisance.

Then the ambitious reporter with a wicked sense of humor wrote a totally false piece about the Virginia City camel races, naming illustrious people who had attended and bet on the camels. It went viral for those days, being picked up by other papers, and everyone believed it. It wasn’t long before Virginia City fathers decided, why not? Let’s have camel races, which they did and still do, and they also include ostrich races with the camels now each year in early September.

Three hours is far too short to do Virginia City justice, but that’s when the train returns to its Carson City depot. Those who want to spend the night in Virginia City can do so and return on the next day’s train. Most get back on board, keeping a sharp lookout for the mustang herds on the return journey.

By late afternoon when the train pulls back into the station, everyone is ready to find a steak dinner or hit the casinos in Carson City, carrying away memories of a train ride into the past. n

Andrea Granahan is a writer who lives in Bodega, California.
IF YOU GO:
The Virginia & Truckee Railroad runs two routes.

The train from Carson City to Virginia City runs Fridays, Saturdays and Sundays from Memorial Day through Oct. 20.  It departs from the Eastgate depot six miles east of Carson City at 10 a.m. and returns at 4:30 p.m. The trip is about an hour and a half each way, with a three-hour layover in Virginia City.

The train from Virginia City through the historic Comstock mining region to Gold Hill runs daily from May through October. It is a 35-minute roundtrip ride on a four-mile route.
For information, visit virginiatruckee.com.