You are here: Home / Great RVing Destinations / 10 Things You Won’t Want To Miss In Talkeetna, Alaska
This post may contain affiliate links or mention our own products, please check out our disclosure policy here.

Talkeetna, Alaska is possibly one of the most iconic south-central Alaskan towns.  Filled with a delightful mix of artists, bush pilots, mountaineers, brew masters, and musicians, a diverse cast of characters populates the town of about 700 people.

Talkeetna was initially founded as a railroad hub for the Alaskan Railroad system in 1916.  It is now connected to the Alaskan road system via the Talkeetna Spur off of the Parks Highway, about 2 ½ hours north of Anchorage. Visitors are often treated to spectacular views of the Alaska Range. 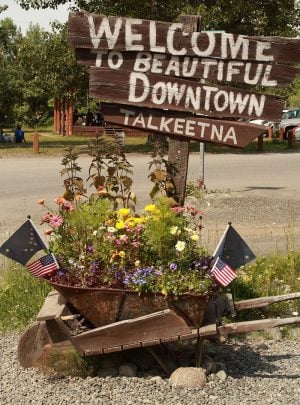 Talkeetna, AK is home to around 700 people, and worth spending the time to get to know. (Photo by Frank K. via Wikipedia)

Many of the original 1900s buildings remain, such as the Talkeetna Roadhouse and Nagley’s General Store.  From 1997 until his death in 2017, the honorary mayor of Talkeetna was Stubbs the Cat, an orange tabby who was often seen at Nagley’s and throughout the streets of Talkeetna.

Though the town is small, there is plenty to see and do in Talkeetna, and it is well worth the trip to spend some time getting to know this historic village.  Everything is within walking distance, so bring some comfortable shoes and enjoy the town.