You are here: Home / Columns / Tech Tips / Tech Tips: Chilling Out with Fridge Tips
This post may contain affiliate links or mention our own products, please check out our disclosure policy here.

Is it the chill of winter? A desire for the golden days of summer? We don’t know, but our minds turn to thoughts of RV refrigerators. This month we don’t go heavy into the tech, but offer up tips for two perplexing problems: what to do when your RV refrigerator latch just isn’t up to keeping the door closed in motion, and how to safely defrost your cooler.

Freezing fridge fins frustrate food fixers. So says the cook in our RV household. If you’ve opened the door of your RV refrigerator and been confounded by blocks of ice where they should not be, this piece is for you.

For some RVers, RV refrigeration is a complete mystery. The typical “reefer” back home has auto-defrost and fans jetting cold air all over the inside of the refrigerated section. It is pretty much self-maintaining—well, OK, it doesn’t toss out the old moldy leftovers, but it handles most everything else.

An RV refrigerator relies on natural convection to get the cold air moving around inside the refrigerator section, and you’ll find the cold comes from those aluminum colored fins in the back, up near the top of the compartment. Open the door to take a look or grab something out and warm air from your living quarters invades that refrigerated space. Moisture in the air typically makes its way to those fins and attaches itself like a barnacle on the bottom of a ship.

Left to itself, not only is the ice buildup a bit unsightly, it will eventually kill off your reefer’s cooling ability. What’s to be done to fix the problem? When you get an ice buildup, there’s nothing to do but shut down the refrigerator and manually defrost it. Usually opening the door and leaving it open for a few minutes on a warm day will be enough to banish the ice queen, but sometimes a little extra help is needed. Don’t pull out the flamethrower (or the hair dryer), simply boost the flow of warm air with a fan.
If things are really iced over and you don’t want to wait for the warm air trick, you can also heat up a pan of water—don’t boil it, but get it hot. With your fridge “de-fooded,” insert the hot pan of water on the shelf and close the door. Two pans are twice as fast—one in the fridge, one in the freezer.

To slow down the formation of ice on the chill fins, limit the amount of time you have the door open. Like one old friend says, he used to tell his son, “Open door. Take mental picture. Close door. Make decision. Reopen door. Remove choice.” Putting a small circulating fan in the refrigerator may also help keep the air circulating inside the box, and some RVers swear it reduces their ice build up. We kind of wonder about it, since humidity in the box will still find its way to those fins, but that’s what they say. 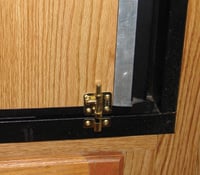 Here’s a recent issue for us. At day’s end, we’d open the trailer door to find our favorite beverage cans rolling around on the floor. Evidently the weight of the cans in the refrigerator door, coupled with the force exerted by making corners, would cause the fridge door to pop open, and the pop to pop out. Not only did it present us with dented cola cans, but too often the door wouldn’t be kind enough to close itself, and the interior of the cooler would be anything but cool.

Somewhere in a past owner’s life, the door latching system broke on the refrigerator compartment and was never replaced. Several years too late for getting the part, we were left with a door security issue. After a lot of head scratching and improbable plans, a quick and dirty solution came up. And surprisingly, it met with approval by the Kitchen Goddess and the pocket book.

Yep, two-dollars and change bought a brass barrel bolt. We pre-drilled through the metal trim under the door, and ensured that the screws were short enough not to cause trouble by running into anything vital. Now when we hit the road we simply shoot the bolt through the latch and head off. No more rolling cola.

Not into blasting holes for mounting screws? Some RVers report they’ve been able to use “hook and loop” tape to adequately hold their doors closed. And we’ve seen commercially produced products marketed to keep young children from opening refrigerators. Dubbed Safety 1st Fridge Locks and sold at Walmart, these devices use double-stick tape to mount a plastic locking tab that secures the doors. Problem is, many customers report that after a few tugs by recalcitrant children, the double-stick tape just pops loose. This may not be a problem for an RVer without reefer marauders, but we haven’t personally tested the fix.