You are here: Home / Columns / Tech Tips / Tech Tips: Protecting Your Diesel Engine
This post may contain affiliate links or mention our own products, please check out our disclosure policy here. 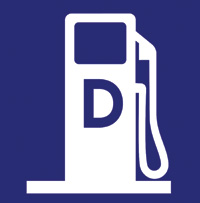 Not everyone can head south and avoid the frigid air of winter. Jobs and other responsibilities may cause some to wistfully sigh as they watch the snowbirds cruise out of town in pursuit of the warm sun in the south. If you’re one that’s stuck in the cold, you’ve probably already winterized your RV systems. Your fresh water tank is empty, your water lines blown or charged with antifreeze. But what about your diesel fuel tank? Have you taken appropriate action to protect your “oil burner”?

Fast-forward six months. Perhaps your situation is reversed. Instead of being able to get out and enjoy travel in those lazy days of summer, your circumstances require you to keep the rig laid up in the yard. While freezing weather doesn’t endanger your RV plumbing system, it could cause problems for your diesel power plant.

Just like foods and pharmaceuticals, diesel fuel has a shelf life and parameters for safe storage. How long is diesel good for? Much depends on whom you ask. It can be a pretty loaded question. While the reality is that diesel is fairly stable, how long between refining and end use is said to be anywhere from a year clear on down to a matter or weeks—some even say days. Why the divergence of opinion?

Again, it’s back to whom you ask. A handout from a major oil company indicates diesel fuel should be stable for about a year, with certain provisos. It should be held at 68 degrees or less, and other (fine print) conditions apply. But let’s talk about temperature. While the ideal is 68 or less, what happens in higher heat situations? Stored in mid 80s, diesel shelf life drops down to as little as six months.

Now get the take on storage from a fuel additive company representative whose firm tested samples of fuel from a refinery on the day of production. Their conclusion after testing? “Barely passable.” After that same shipment reached the retailer’s pumps and up for sale—a mere 20 days later—that same fuel didn’t meet minimum specifications

Where does the truth on diesel longevity lie? Who can be sure? Perhaps we could speculate that it lies somewhere between these extremes. The issue is—what causes diesel to go bad, and what can the average RVer do about it?

What causes problems for diesel fuel in storage? The principal problem is oxidation. As diesel ages, the fuel reacts with oxygen and produces gums and sediments. These nasty byproducts can clog filters, and if they get past the filtration, they don’t burn well, producing high levels of carbon. They can also clog injectors and cause serious (and sometimes expensive) grief.

Aside from oxygen, other gremlins can spoil your diesel by causing the fuel to age more quickly. Water in the fuel provides a great environment for fungi and bacterial growth—these too, can clog filters. They also foster the production of organic acids, which create a host of other fuel stability issues.

If you need to put your diesel-fired RV or tow vehicle “on hold,” there are some things you can do to prevent these problems. First, top off the fuel tank. The less air space above the fuel, the less space there is for that air to rain on your parade. Moisture-laden air easily condenses in a fuel tank, and that condensation (water) then contaminates the fuel. “Enter the fuel additive retailer,” says the script. Fuel additives may have their place. Anti-oxidants work against the oxidation process, helping to keep the fuel stable. Biocides and fungicides kill off the bad bacteria and fungi. But like that great prescription you picked up at the pharmacy that is “guaranteed to cure what ails you,” there can be side effects. Many biocides and fungicides are toxic, so if you use them, read the warning labels carefully and follow the instructions.

For those who use biodiesel, the situation gets even murkier. But one thing seems to be universally agreed upon: Shelf life issues of biofuel are an even bigger problem. If you plan on laying up a diesel engine rig, it would seem best to burn off any biodiesel in the tank and fill up with the standard “dinosaur-based” fuel.

Some have recommended a strategy of periodically starting the engine up and running it for a few minutes while in storage. Some industry folks and others put the thumbs down on the idea. Why not? It’s in the nature of modern diesel engine design. Not all the fuel pumped up to the engine is burned; that which isn’t is pumped back to the fuel tank via return lines. This only tends to “stir the pot,” as the partially warmed fuel is returned to the tank. The worry is that that warmed-over fuel could create more oxidation problems.

If you’ll pardon the pun, “Oyl in oyl, me best advice is to keep that engine running” and get out as often as you can on RV trips.