You are here: Home / Columns / Tech Tips / Tech Tips: Changing the Locks
This post may contain affiliate links or mention our own products, please check out our disclosure policy here.

If you’ve got an RV, chances are you’ve got a key to fit your outside compartment door locks. And chances are pretty good that you have a couple of other things—sticky door locks, and a key that will fit the compartment doors of a lot of other RVs. For some reason, RV manufacturers use a small pool of key patterns for the locks, and so if you keep valuable stuff locked up in your basement storage, it’s probably not all that safely locked up. We’ll talk about changing out your locks and maintaining them.

Maintaining Cam Locks
The typical lock on an RV compartment door is what is called a “cam lock.” A cam lock is a relatively simple animal, but it can get gummed up easily. Wind-blown dust flies up the keyway, and many lubricants attract the dirt like a magnet. Result? Your key doesn’t want to go in, won’t turn the mechanism, and generally frustrates the daylights out of you.

If a compartment lock starts to act up, the first step is to try to lubricate it. Some folks believe in dry graphite, but there are plenty of professional locksmiths who’ll tell you to swear off graphite, as it can cause more problems than it can resolve. The same is often said about WD-40; the locksmith we call on for advice says his favorite lube is one that contains not silicon, but Teflon.

If a shot of spray lube and repeated working of the lock doesn’t resolve the problem, you may be in deeper trouble. We recently hit a spate of “can’t get the key in the keyway” issues: Every time we put the key in the lock, it would jam, and when pulling it back out we’d find the key coated with a strange, yellowish waxy substance. What was it? Bug larvae! Some insects find keyways a great place to lay eggs, and sticking a key in the hole mooshes the offspring. The result is an often-terminal gum up. We took our damaged locks apart, and even a thorough soak in solvent wouldn’t resolve our issues. The photo here shows the result of dirt and lubricant meeting inside the lock cylinder, creating an almost gravel-like substance. It was time for a new lock. 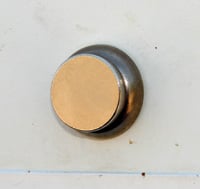 Replacing Cam Locks
Replacing a cam lock is a fairly straightforward proposition. First, on the inside of the lock you’ll need to remove a screw that holds the locking cam arm in place. Careful! Pieces can get loose easily, and you may need to reuse some of them. Remove the cam arm, and then using a wrench or water pump pliers, unscrew the retaining nut that holds the “base” of the lock in place. Push the old base out of the compartment door and replace it with one of the same diameter and length.

Here’s where you might hit a snag: We could find a cam lock with the correct length, but the diameter of the new lock base was just a tad larger than the old one. Blasting a larger hole through the compartment door was a possibility, but the builder had outfitted the door with hardware that held the lock in place to keep it from spinning in the door. Happily, we found the inside diameter of the lock base was the same as the old lock’s. We simply took the “innards” from the new lock, inserted them in the old lock base, and had a good fit.

Installing the lock means shoving the new lock back into the door and locking it into place with the retaining nut. Insert the key in the base and turn the lock to either the “open” or “locked” position. A small metal piece called a governor will allow the lock to turn only 90 degrees. If the lock swings the wrong way, you’ll need to take the governor off the lock and turn it a quarter turn and try again. The governor lies between the lock base and the cam arm, and is held securely by the screw that installs into the end of the lock base. This sounds more complicated than in practice, just fiddle with it, and you’ll soon catch on.

With the governor set in the appropriate orientation, slide the cam arm onto the lock base, and insert the lock screw in the base. Be careful as you tighten the screw; if you torque it too much, the lock will bind and the key will not work the lock. If this happens, simply back off the screw until the key works the lock freely. 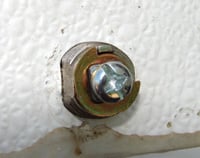 Protecting Cam Locks
Now with new cam locks installed, how can you keep dirt and bug larvae out of the keyway? Some cam locks have a special dirt plug that slides into the keyway to keep the dirt out. Well, at least we’re told this is so—we’ve never actually found any, but we’ve been told they exist. We thought about sticking a piece of tape over the keyway, but weather could easily remove the tape, or even bake it onto the lock, making the situation even worse. Here’s one possible answer: If the lock base is built from a magnetic material, stick an appropriately sized magnet over the keyway. We found some dandy disc magnets at the hardware store that stick right over the lock face. Our old, dead cam locks wouldn’t have been good candidates—evidently they were built out of aluminum.

A More Secure Approach
With all those similarly keyed cam locks floating around, why not enhance your security? A visit to a reputable locksmith can, for a few dollars, provide you with a cam lock that can’t be opened by every fifth RVer. And if you choose a lock with a simple straight key setup, you can get keys duplicated inexpensively. 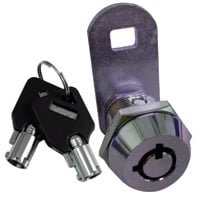 You can step up to a higher level of security by replacing those standard, straight key cam locks with what is called a tubular cam lock. The name tubular comes from the shape of the key and the keyway.  Tubular cam locks cost more (around $15 from Internet suppliers), and the keys are far harder to duplicate.  However they provide a much higher level of security than the standard straight key version.

You can also get a cam lock that combines a key with a combination lock. If for some reason you wanted other folks to have access to your storage compartments and not want to hand over a key, you could provide them with a key code to access your basement storage. An advantage here is that many combination locks are easily reset, allowing you to change the combination code whenever you want.