You are here: Home / Columns / Tech Tips / Tech Tips: What’s the Right Octane?
This post may contain affiliate links or mention our own products, please check out our disclosure policy here. 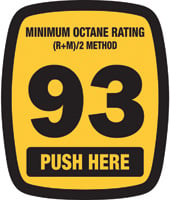 Back in the day,” recalls one RVer, savvy drivers added an auxiliary fuel tank to their tow vehicle. The extra tank was filled with “premium” gasoline, while the factory tank held “regular.” If, when towing, the engine started to ping, the driver simply swapped over to the higher-octane fuel and sailed merrily on his way. What about now? Are you wise to burn higher-octane gas in your tow vehicle? And what about diesel engine owners—is there a benefit in running a fuel with a higher cetane number? We’ll speak to gasoline engines first.

Here’s a topic that stirs up a lot of feelings. First the factoids: The octane rating you’ll find on the fuel pump is a measure of the ability of a gasoline to reduce engine knock. Regular must have a minimum octane rating of 87; mid-grade ranges from 88 to 90, and premium must have an octane rating of 91 or above. The higher the octane rating, the slower the fuel burns, preventing knock when engine cylinder pressures are high.

When your engine is running at full throttle, your cylinder pressures are naturally at a high level; a bit of knock then is to be expected. Towing a rig, particularly when climbing a steep hill, will call up higher cylinder pressures, and as a result, some ping. Still, prolonged engine knock can cause damage. Today’s fuel-injected gasoline engines automatically adjust for driving and performance conditions, squeezing the most mileage out of whatever gas you’re burning.

Knocking Issues
So what gas should you use? As a rule of thumb, fuel up with whatever octane grade your manufacturer recommends. Generally speaking, pumping in premium or even mid-grade gas when your vehicle calls for regular will not improve your fuel mileage or engine performance, but it will reduce the level of your available cash. On the other hand, if you consistently have knocking issues while towing, you may want to consider pumping in a higher-octane fuel. We say “may” with this caveat:

If your engine knocks or pings, it isn’t necessarily the gas—it could be you have an engine problem that needs fixing. It could involve electronic control systems, ignition timing, or exhaust gas recirculation problems. If you’re dealing with an older or high-mile rig, it’s possible you have a buildup of carbon in your cylinders causing the problem.

Once engine problems have been ruled out, then consider pumping in higher-octane fuel. It won’t hurt your engine, and if your knocking vanishes, then you may find the use of higher octane when towing could be an answer.

What about ethanol in your gasoline? Could that have an impact on your RVing? Absolutely. Ethanol, or grain alcohol—typically produced from corn—is commonly added to gasoline to help reduce air pollution. Since grain alcohol doesn’t have as much energy per gallon as gasoline, your tow vehicle or motorhome will indeed use more gas per mile driven. While industry points to a figure of a 3 percent drop in fuel economy with the use of 10 percent ethanol, many drivers say they’ve suffered a greater loss in economy. If you can find gasoline without ethanol, or at least less than 10 percent ethanol, you will get better fuel economy.

Diesel Fuel
Now a word about diesel engines. The numbers on the diesel fuel pump are cetane numbers or CN ratings. While octane ratings speak to ignition stability (and ability to prevent spark knock), CN ratings speak to combustion quality. Since a diesel engine depends on compression to ignite the fuel, CN measures fuel ignition delay time. How much time between the start of the injection of the fuel until the first pressure increase in the engine’s cylinder due to the fuel’s combustion. The higher the CN, the shorter the delay time.

Simply put, the higher the CN, the quicker the fuel ignites, the better. But like octane ratings in gasoline engines, just pumping in a higher CN fuel doesn’t mean you’re going to do better. Like octane ratings, each diesel engine maker provides a recommended cetane number. Typically light trucks (pickups) will look for a CN ranging from 40 to a high of 55. Pump in diesel with a CN greater than the manufacturer’s recommendation and you probably won’t discern an increase in performance or fuel economy, but you will find your wallet lightens up quicker.

There are cetane boosters aplenty, and diesel engine owners have plenty to say about their use. Typically, the comments they make indicate they like them, not so much for a boost in performance, but rather for increased engine lubrication. The only difference that we could find a consensus on was that in cold weather, a cetane booster might help you start up quicker, with less starter run time.

Russ and Tiña De Maris are authors of RV Boondocking, a book that can make your RV adventures away from civilization more fun and fulfilling. Visit www.icanrv.com for more information.