You are here: Home / Top Stories / Tetons Sparkle in Snow
This post may contain affiliate links or mention our own products, please check out our disclosure policy here.

Grand Teton National Park is a wondrous place anytime of the year. Visit in summer, however, and you’ll have to share the trails, campsites and views with hordes of other visitors. Spring and fall are especially nice, as there are fewer crowds, the wildlife is more visible and magnificent scenes abound. I’ve been to the park in all four seasons and must say that winter is one of my favorite times to visit.

Why? Because the Tetons are even more gorgeous with a blanket of snow. Also, there’s nothing like skiing along a lonely trail and finding animal tracks in the snow. Once while skiing with my husband, Mike, we had proof in the form of footprints that wolves had strolled on the same path we were on. Another day we saw two coyotes harassing a flock of a dozen trumpeter swans, but to no avail.  And one day, while skiing the realms of frozen ponds at Swan Lake and Heron Pond, we saw snowshoe hare tracks and a very friendly red squirrel.

We skied along the Snake River and saw a multitude of moose scat and tracks. In fact, during our five-day visit we saw nine moose. They are one of my favorite mammals. The largest member of the deer family, moose are at home both on land and in the water. In the warmer months, gangly moose plunge their big bulbous faces underwater for aquatic plants that line the river bottom and banks.  In winter, they often browse on sagebrush, willows and other vegetation.

Spectacular Range
Grand Teton National Park is home to the Teton Range, majestic peaks that rise abruptly from the valley floor. The Teton Mountains—the result of sporadic earthquake-produced jolts—form an impressive range, one of the most dramatic of Rocky Mountain scenes. Foothills are nonexistent in this land; instead, the Tetons burst straight up from the valley known as Jackson Hole, piercing the sky with jagged peaks. Here are lakes, rivers and see-forever skies—all home to an abundance of plants and animals.

Humans have lived in the shadow of the Tetons for more than 12,000 years. Although no one tribe claimed the land, several Native American tribes—Crow, Shoshone, Blackfeet and Gros Ventre—used the Jackson Hole valley during the warm months.  History books say that John Colter, who made his historic trek during the winter of 1807-1808, may have been the first white man to enter the valley.  Later, mountain men trapped in the region, the lure of abundant furs a constant impetus in the move west.  Unfortunately, many species were hunted to near extinction.  Frontier settlers left behind more than 300 historic structures.

The park, which was established in 1929, contains about a dozen glaciers and a dozen peaks above 12,000 feet. The highest, Grand Teton, spires more than 7,000 feet above the valley floor, scraping the heavens at 13,770 feet. 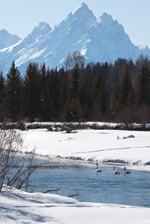 Traveling around the park in winter is different from visiting in the summer. Beware of icy roads. (Call 307-739-3682 for up-to-date road information.)  Also, be sure to carry a winter emergency kit, including a shovel. And bundle up to avoid frostbite and hypothermia.  Layer clothes, wear breathable fabrics, stay well hydrated and do not travel alone. Temperatures in December and January range from average lows of 1.5 degrees to highs of 26. In February, the highs jump up to an average of 31 degrees and the lows to 3 degrees.  Visit in March and you’ll find average temperatures range from 12 to 39 degrees.

Sleigh Rides
The best way to see the national park in winter is to pilot your tow vehicle and drive the roads that are plowed—and watch for wildlife.  If you like to get off the beaten path, you can do like we do and spend your days skiing or snowshoeing.  Some park trails are marked. Outside the park you’ll find groomed trails as well. Combine the national park with the nearby Jackson Hole area and you’ll experience one of the largest back-country skiing terrains in the lower 48 states. Remember, if you are snowshoeing, please respect groomed ski tracks by walking beside them. Snowshoers may want to check out the daily ranger-guided snowshoe walks that begin at the Craig Thomas Discovery & Visitor Center. In addition, visitors can enjoy snowmobile and winter tours, sleigh rides, snow coach tours and wildlife and nature tours as well.

One of the best places to look for beautiful scenes and wildlife is at Oxbow Bend. Here you will have a dramatic view of massive Mount Moran, which is reflected in the calm waters of the Snake River. Early morning is the best time for both viewing the scene and photographing the event.  The peaks also tower over the mighty Snake River, which meanders its way through the park for 27 miles. The river begins life in the wilderness, born of heavy snowpack near Yellowstone National Park, and enters Grand Teton National Park where it integrates with Jackson Lake. The Snake then flows out of the lake at Jackson Lake Dam, continuing past Oxbow Bend, where a cutoff of the river moseys along at a quiet pace.

The river at Oxbow Bend was frozen while we were there, but it was still a magnificent place for making images and observing wildlife.  We saw several trumpeter swans lying around one small open hole of water.  At another small hole we saw a river otter pop up onto the ice. It rested for a few minutes then dropped under the water—only to pop back up with a fish in its mouth.

Winter Camping
All of the national park campgrounds are closed in winter, but you can park your trailer near the Colter Bay Visitor Center for a small fee. Primitive winter camping exists, which means you will be camping on the plowed, but snow-covered parking lot.  For full amenities, check out Grand Teton Park RV Resort (800-563-6469, yellowstonerv.com), which is open year-round and is six miles east of Moran Junction.

During our visit we not only explored the park on a daily basis, we spent time at the National Elk Refuge, located just southeast of the park. Thousands of magnificent elk summer in the Greater Yellowstone Ecosystem, which includes the Teton Range and Jackson Hole; it is the largest essentially intact natural area in the contiguous United States. In the winter, anywhere from 5,000 to 8,000 elk gather at the 24,700-acre refuge.  Home to the largest elk herd in the world, the area also supports a large herd of bison as well as deer, bighorn sheep, pronghorns and coyotes, plus many small mammals and a variety of birds.

During the late 1800s and early 1900s, settlers began encroaching on traditional elk migration pathways and wintering areas.  Severe winters, a reduction in elk forage and shrinking habitat eventually meant the starvation deaths of thousands of elk in Jackson Hole. While the locals needed to protect their domestic cattle herds and haystacks, they also yearned to have healthy elk herds in the valley. Thus, in 1912, the refuge was formed and folks began feeding the elk via horse-drawn sleighs.

Viewing Elk
Although you can often see elk from the highway, your best bet for seeing them up close is to sign up for a National Elk Refuge sleigh ride. We did, enjoying every moment, even though it was a brisk 17 degrees that morning. We just bundled up in our ski clothes, including down, and smiled when we were given toasty-warm blankets to place on our laps. Two draft horses pulled the sleigh out into the refuge, with our personable guide telling stories along the way. It was an awesome experience to be so close to the elk—in our case, a herd of bull elk—with the magnificent Tetons in the background.  Tickets are available at the Jackson Hole and Greater Yellowstone Visitor Center in Jackson, which is open from 9 a.m. to 5 p.m. daily.  Sleigh rides are offered from 10 a.m. to 4 p.m. from mid-December through March, except for Christmas Day. For information, call (800) 772-5386 or visit fws.gov/nationalelkrefuge/NERSleighRides.htm.

Being lovers of wildlife we just had to check out the National Museum of Wildlife Art, north of the town of Jackson, before leaving town.  The museum is open Monday through Saturday from 9 a.m. to 5 p.m. and Sunday 11 a.m. to 5 p.m.  This wonderful museum offers all wildlife-related exhibits.  And like one local said, “The neat thing about the museum is that it doesn’t stay the same.  They often display something new.”

Our winter experience at Grand Teton National Park was something new for us.  It was an amazing experience and one we’ll definitely enjoy again.

For more information on the Tetons, visit the Craig Thomas Discovery & Visitor Center. It is open year-round, except for Christmas Day. Winter hours are 9 a.m. to 5 p.m. (Call 307- 739-3399 or visit nps.gov/grte. Park personnel can direct you to the best places to ski and snowmobile.