You are here: Home / Blog / The 19th Hole: Ben Hogan’s ‘Five Lessons: The Modern Fundamentals of Golf’
This post may contain affiliate links or mention our own products, please check out our disclosure policy here. 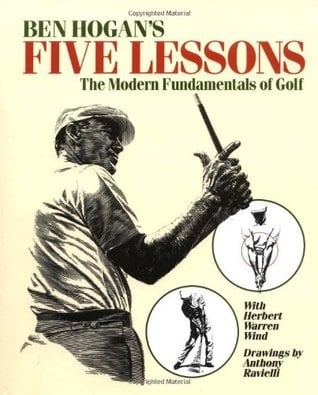 What began as a series of golf instruction articles for Sports Illustrated in the 1950s, resulted in a classic instruction book on the fundamentals of the sport. Ben Hogan’s ‘Five Lessons: The Modern Fundamentals of Golf’ was published in 1979 and has been an invaluable tool for those wishing to improve their game.

William Ben Hogan, who died at the age of 84 in 1997, is considered one of the greatest players in the history of the game, winning nine career majors during his playing career. Hogan is also noted for his profound influence on the golf swing theory and his legendary ball-striking ability, much of which is discussed in the book.

A must-read for those wishing to improve their game, Hogan’s ‘Five Lessons’ is in the same elite golf instruction category as Harvey Penick’s ‘Little Red Book’.

Ben Hogan’s ‘Five Lessons: The Modern Fundamentals of Golf’ was written in conjunction with Herbert Warren Wind and illustrated by Anthony Ravielli. The five articles presented initially in the Sports Illustrated included:

Ben Hogan long believed that any golfer with average coordination could learn to break 80 if he applied himself intelligently. Many who have read the book use it as a constant reference when their game goes south.

The book explains the fundamentals of a good swing and who better to learn from than from one of the best in golf history. Getting everything synchronized and into practice is the challenge, but the great illustrations will help keep the perfect swing image in your mind’s eye. ‘The Modern Fundamentals of Golf’ is no instant and easy shortcut, but it will help you get your game back on track, if and when you need it.

One final note on Ben Hogan’s ‘Five Lessons: The Modern Fundamentals of Golf,’ if you’re ever in need of a great golf gift for someone, you can’t go wrong with this 128-page book. First published in 1979, it’s available at all major booksellers.