You are here: Home / Blog / The 19th Hole: Book Review: Jack Grout: A Legacy in Golf
This post may contain affiliate links or mention our own products, please check out our disclosure policy here.

by Rick Stedman
February 8, 2014Filed under: 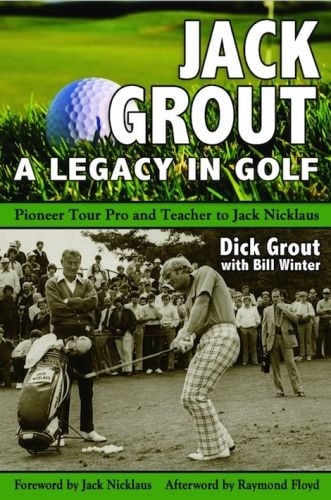 Though you may not have heard of Jack Grout, the name Jack Nicklaus is a household word in the golfing world. Jack Grout, on the other hand, is credited with serving as Nicklaus’ golf instructor for more than four decades.

A new book, “Jack Grout: A Legacy in Golf,” explores the many contributions Grout made to the game of golf, and includes lots of stories about his close relationship with the Golden Bear. Co-written by Dick Grout, Jack’s son and Bill Winter, the 270-page book explores the evolution of American golf from country club-based to one of its most popular activities. Grout not only forged a solid career as a playing professional, he later had a truly brilliant one as teacher of not only Jack Nicklaus, but also Raymond Floyd, David Graham, Lanny Wadkins, Olin Browne, and other great champions.

But it is not just a golf book. As jack Nicklaus has noted, this is a book for golfers and non-golfers alike. It is the warm, eventful and often funny story of a quiet and humble family man who succeeded at every level in a profession that demands tremendous self-focus and intense competitiveness. And who did so while managing, always, to be just a really good guy.

Nicklaus once said, “Jack Grout was my unconditional friend for nearly four decades, serving as both my golf instructor and, after the premature death of my father in 1970, as a second father to me. Jack gave a great deal of himself to me as my only golf teacher from the day I first attended one of his junior golf classes at Scioto Country Club, right up through my final major championship victory in the 1986 Masters.”

Nicklaus wrote a foreword to the book, and Raymond Floyd, who also benefitted from Grout’s tutelage, penned an afterword.

Dottie Pepper, NBC golf analyst and 17-time LPGA tournament winner, said of Grout: “This book is a reminder of why the great players and teachers are just that…GREAT!”

“Jack Grout: A Legacy in Golf” is available at all major bookstores.