You are here: Home / Blog / The 19th Hole: Golfing and Lightning Are Not the Best of Friends
This post may contain affiliate links or mention our own products, please check out our disclosure policy here. 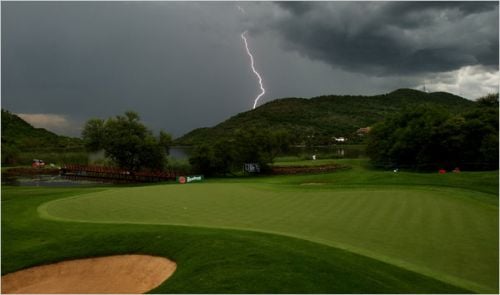 According to the National Oceanic and Atmospheric Association, approximately five percent of annual lightning deaths and injuries in the United States happen on golf courses. Also, the National Weather Service estimates there are 25 million lightning flashes in the United States each year, killing an average of 58 people annually. This compares to the 57 deaths annually caused by tornadoes and 48 deaths a year from hurricanes.

Recently, an Arizona man had to be resuscitated after being struck by lightning while on a golf course. According to the Prescott Daily Courier, 75-year-old Ray Row was on the 18th hole at Antelope Hills Golf Course in Prescott, Ariz., when he was hit by lightning. When Row wasn’t responsive, two nearby golfing partners started CPR and called for help. The man was transported to the hospital and survived the ordeal.

Earlier this year, an Illinois golfer was killed after being struck by lightning while on the first hole of the Wing Park Golf Club in Elgin.

When skies are threatening and you’re on a golf course, consider these safety tips; they just might save your life.

• If you are hopelessly isolated in a level golf course or field and you feel your hair stand on end indicating lightning is about to strike—squat low to the ground on the balls of your feet. Place your hands on your knees with your head between them. Make yourself the smallest target possible and minimize your contact with the ground. Do not lie flat on the ground.

The National Lightning Safety Institute’s “A Lightning Safety Mandate for the Game of Golf” has more useful tips and information at http://www.lightningsafety.com/nlsi_pls/golfsafetyrecommend.html.