You are here: Home / Blog / The 19th Hole: Golfing at Midnight on the Summer Solstice
This post may contain affiliate links or mention our own products, please check out our disclosure policy here. 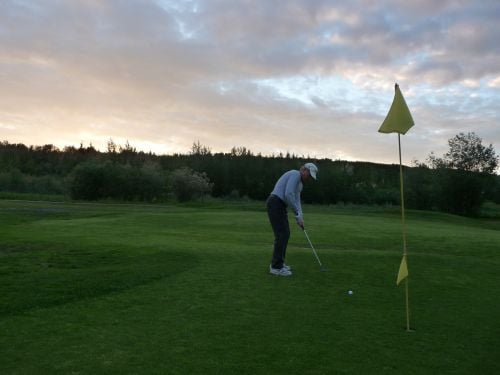 I recently checked off two bucket list items when I golfed on the summer solstice, June 21, in Fairbanks, Alaska.

Bucket List Item #2: Play golf at midnight on the summer solstice. I also hit the first tee shot around 9 p.m., and finished on the 18th hole just after midnight, thanks to the nearly 24 hours of daylight that this part of the globe annually experiences during the summer solstice.

North Star Golf Club will never be on the PGA Tour radar, but visitors come here for the sheer enjoyment of the game. For first-time visitors like me, it’s the experience and fond memories of playing such a course that will forever be appreciated. The par 72, 6,342 yard course features bucolic scenery coupled with undulating greens. When the course opened in 1993, those greens were flat, according to Roger Evans, the owner and superintendent. However, thanks to permafrost, which is pervasive in colder areas like Siberia, northern Canada, Alaska, and Greenland, the land shifted beneath the greens causing steep undulations, which is a nightmare for putting!

Every course has its own special rules and idiosyncrasies. For North Star, it’s the animal scorecard that’s on the bottom of the golf scorecard. The animal spotting checklist includes, but is not limited to: Snow shoe hare, red back vole, sand hill crane, red squirrel, marsh hawk, muskrat, marmot, coyote, moose, bear, eagle, (huge) ravens, and fox.

For local rules, one that I never had to use was the following: If a raven or fox steals your ball, you can take a free drop at the ‘scene of the crime.’ You’ve got to love the local rules!

Without a doubt, Fairbanks’ North Star Golf Club has character and critters aplenty. It’s also worth adding to your bucket list.