You are here: Home / Blog / The 19th Hole: Improve Your Game with the PureShot Sync Golf Training Aid
This post may contain affiliate links or mention our own products, please check out our disclosure policy here. 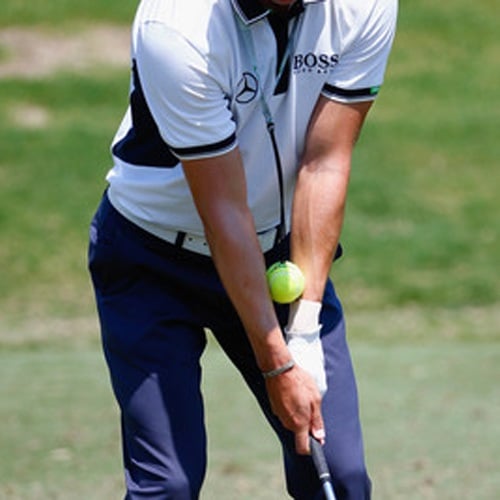 Most golfers will go the extra mile to improve their game. One of the seemingly simple but effective training aids on the market is the PureShot Sync Ball. This simple device has gained a great deal of attention over the last several months since the former number one golfer in the world, Martin Kaymer, has been seen using the PureShot Sync Golf Training Aid.

The PureShot is designed to synchronize the golf swing and add extension in the process. The simplistic design consists of a lanyard and ball with an adjustable cord. Designed for either left or right handed golfers, the PureShot Sync Ball can benefit golfers of all sizes and abilities. Since the PureShot is adjustable, it can also be used by women and juniors.

The ball is placed between the forearms at address, and by maintaining slight tension in the cord, you will create extension on your back swing and downswing, which will lead to a larger swing arc with more power and speed. The PureShot Sync Ball is designed to help you develop width, extension, and more club head speed in your golf swing.

Earlier this year, Kaymer won the The Players Championship, the PGA Tour’s flagship event. A month later, he won his second major tournament, capturing the U.S. Open by eight strokes. At each of these events, Kaymer, from Germany, used the PureShot Sync Ball in practice sessions before and after each round. Kaymer, who was the No. 1 ranked golfer in the Official World Golf Ranking for eight weeks in 2011, is currently ranked 12th in the world.

The PureShot Sync Ball, which retails for $24.95, also comes with a 30-day money back guarantee and a lifetime warranty. What’s not to like about it? If the former number one ranked golfer in the world has faith in a training aid like PureShot Sync Ball, the everyday golfer should give it a try as well. More details are available at http://www.intheholegolf.com.