You are here: Home / Blog / The 19th Hole: Trump’s Ferry Point Course in the Bronx to Open Spring 2015
This post may contain affiliate links or mention our own products, please check out our disclosure policy here. 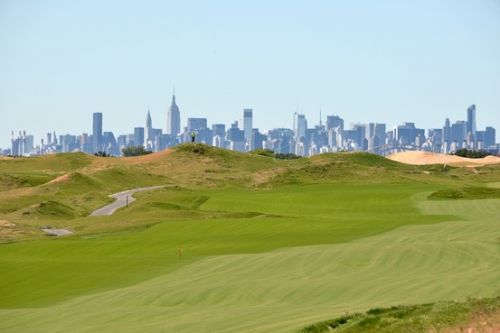 It was Jack Nicklaus’ design expertise and Donald Trump’s entrepreneurial spirit that resulted in a recent ribbon cutting ceremony in the Bronx for the official unveiling of Trump Golf Links Ferry Point.

Sitting on a 192-acre former landfill site that boasts stunning views of the Whitestone Bridge and the Manhattan skyline, the 7,400-yard links-style course won’t officially open to the public until the spring of 2015.

By the time it officially opens, however, Ferry Point will also include a clubhouse and practice area with a pitching range and two-tier, lighted driving range with grass and turf. On a few holes, like Nos. 6 and 7, golfers can use the Empire State Building or One World Trade Center—depending on ball flight and wind direction—as a target line.

As a public facility owned by the New York City Parks Department, membership fees will be nonexistent, unless residents take into account their city taxes. Greens fees are yet to be established, however, speculation is that they will be three times that of other public courses in the area. Also, New York City officials say that Ferry Point will be used for some public programming, primarily junior golf, in conjunction with the city’s Parks Department starting next summer.

Building the course, which began during former NYC Mayor Rudy Giuliani’s administration, was met with a host of cost overruns and legal snags. In early 2011, following the departure of the course’s original developer, Trump stepped into the sputtering project and was awarded a 20-year lease and the contract to manage the course by current Mayor Michael Bloomberg’s administration.

Ferry Point’s central location amid the boroughs—”we made it out from Trump’s office the other day in 12 minutes,” said Nicklaus—presents money-generating possibilities, not just as a public golf destination, but to lure premier events like a USGA championship. Trump and Nicklaus said they hope to host a U.S. Open there in the future.