You are here: Home / Blog / The 19th Hole: USGA Approves GAME GOLF Device for Competition
This post may contain affiliate links or mention our own products, please check out our disclosure policy here. 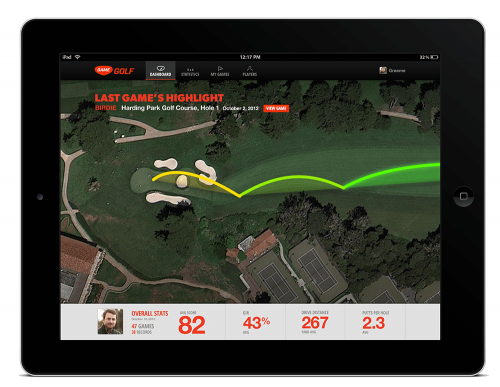 The ability to improve your game whether during a weekend outing with friends or while participating in a club tournament just got easier. GAME GOLF, a wearable device that tracks and displays a golfer’s round of golf, has been officially approved by the U.S. Golf Association and is “allowable under the rules of golf” and can now be used in competition.

GAME GOLF, which consists of a small, light weight device worn on the player’s belt and individual sensor tags that attach to the butt end cap of each club, records every shot played during a round of golf using GPS and motion sensing technology. By simply tapping the GAME GOLF sensor tag to the device worn on the waist, the GAME GOLF device automatically records course, location on the hole, club used, and club distance. After the round, the golfer simply uploads the data via computer to GAMEGOLF.com for post-round analysis, which can also be viewed via a mobile app or web platform.

The new device does not provide real-time club distances and data and cannot be viewed on a player’s mobile device during their round. As such, GAME GOLF was approved for use in competition. The GAME GOLF web platform and the mobile app recreate your round of golf for the purposes of allowing you to see, share, compete, and compare data with a PGA Professional or your group of friends.

“We designed GAME GOLF specifically to allow golfers to capture their round of golf automatically without disrupting the pace of play or interrupting the golfer’s focus,” said John McGuire, GAME GOLF CEO. “GAME GOLF’s unique ‘tag-and-go’ process becomes part of the golfer’s pre-shot routine and is designed to be a performance trigger. The tags were designed using less than two grams of weight, as anything above that number negatively affects club performance.”

GAME GOLF is a tool aimed at growing the game of golf. It attracts the golfer who wants to improve using technology by allowing them to learn the true distances of each of their clubs and gather stats like fairways hit, greens in regulation, number of putts, and more.

GAME GOLF has strategic partnerships with the most influential entities in the golf world, including The PGA of America and Golf Channel. In addition, PGA Tour professionals working with GAME GOLF to develop the product include Graeme McDowell, Jim Furyk, and Lee Westwood. McDowell has been testing and providing feedback on the product for the last two years.

Retailing for $249, GAME GOLF is currently available in golf specialty stores, and online at www.GAMEGOLF.com.