You are here: Home / Blog / The A Swing Will Improve Your Game
This post may contain affiliate links or mention our own products, please check out our disclosure policy here. 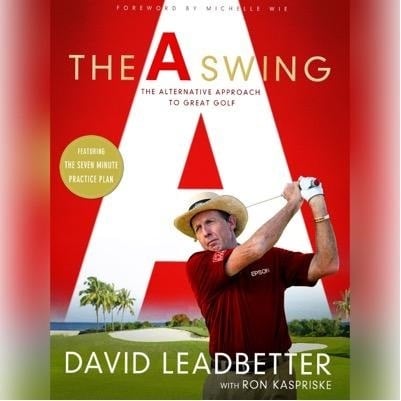 “The A Swing: The Alternative Approach to Great Golf” is the latest book by David Leadbetter, one of the world’s premiere golf instructors. The “A” in A Swing stands for alternative, and is a simple way to swing the club, which follows biomechanically sound, scientific principles, and only requires minimal practice. The A Swing has been thoroughly tested with a wide range of players, from Tour level to beginner, junior to senior, and the results overall have been phenomenal.

“This is an extension and evolution of my philosophy over the years,” says Leadbetter, “and is the result of the time I’ve spent teaching the world’s greats, and recreational golfers alike. The A Swing, like hickory to steel and persimmon to metal heads, is a revolutionary advance in golf instruction. My goal has always been to help golfers improve and enjoy the great game of golf and realize their potential.”

Conventional teaching focuses on the turning action of the hips and shoulders, whereas The Alternative Swing turns its attention inward to the body’s core. The core is comprised of the torso’s complex set of front and back muscles and, importantly, includes those deep muscles located beneath the torso’s exterior musculature that people typically train. After all, it’s the core’s muscles that transmit motion to the hips and shoulders (as well as to the rest of the golfer’s body), and it’s by training and using the core in The A Swing way that golfers will create a more consistent and dependable swing.

Here is living proof that The A Swing is for real.

Greg Kraft, PGA Tour winner, said the following: “I know it sounds crazy to say, but with The A Swing, I am honestly, at times, hitting the ball at least 50 yards longer and straighter; no exaggeration, and my caddie is my witness. He knows my game, and he says if he had not seen it with his own eyes, he would never have believed it! The secret that The A Swing has revealed is synchronization, which is the key to consistency, repeatability, power, and accuracy! The A Swing has answered so many questions for me and I now have an exact road map to playing great golf.”

Published by St. Martin’s Press, “The A Swing: The Alternative Approach to Great Golf” features more than 200 illustrations and a Seven-Minute Practice Plan. The book retails for $27.99 and is available at all booksellers.