You are here: Home / Top Stories / The Dam that Thousands Built
This post may contain affiliate links or mention our own products, please check out our disclosure policy here.

Back in 1930, the Great Depression covered America like a damp gray shawl. Jobs were scarce at best; non-existent at worst. So when jobless men heard about plans to build a great dam across the Colorado River between Nevada and Arizona, they descended there from every state in the nation. The population of Las Vegas, then a small city of some 5,000, exploded with 10,000 to 20,000 dusty, desperate souls.

Many who left distant states to seek jobs figured they would never return to their former homes so they brought everything they could. But once clothes, food and kids were packed into a rickety Model T, scant room was left. Perhaps, they squeezed in blankets, a Bible, some hand tools, a few cooking utensils, a musical instrument, and a piece of cherished jewelry. A tent might have seemed necessary protection against a desolate, inhospitable desert. One woman tied an ironing board to the top of their car. She found it more useful as a bench supported by two packing crates.

After Congress approved the project in 1928, the winning bid to build the concrete arch-gravity type dam went to an alliance of companies called Six Companies, Inc. As part of the contract, Six Companies was to build Boulder City to house the workers. However, construction on the dam began in March 1931, seven months before the original timetable. No houses had gone up.

The government established a camp for surveyors and other personnel near the dam site. Soon a squatters’ camp, known as McKeeversville, surrounded the government camp and became a makeshift home to men and their families who hoped for work on the project. Another camp on the flats along the muddy and volatile Colorado was known as Ragtown. 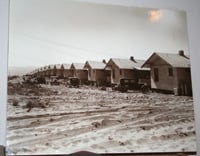 Six Companies hired 3,000 to 5,250 laborers between 1932 and 1934. Until Boulder City could take shape, the company constructed bunkhouses attached to the canyon wall. It was known as River Camp and housed 480 single men, who endured summer heat rising to nearly 120 degrees. All other workers were left to their own devices for shelter. More than a dozen workers and other riverbank residents in Ragtown died that first summer of heat prostration.

The wild Colorado, red with silt, carried the nickname, “the Red Bull.” Such a large concrete structure to hold back tons of water had never been built, and some of the construction techniques were unproven. First, the raging river had to be turned out of its bed to create dry bedrock. Four huge tunnels were blasted through solid rock, and blasted fast because Six Companies faced a fine of $3,000 for every day it ran past the construction deadline. Encouraged by their bosses, crews raced to get the job done.

After each blast, the tunnel had to be “mucked out,” using especially adapted electric shovels. The shovel operators earned $10 a day, the highest wages paid. Each tunnel was three-quarters of a mile long and 56 feet in diameter—large enough to accommodate the body of a modern jumbo airliner. The concrete liners were three feet thick.

Millions of years of weather had eroded the canyon walls. Freezing temperatures in winter and blistering heat in summer created cracks and crevices that split the rock. Before construction could begin on the dam, loose rock had to be removed. Special men, called “high scalers” took those jobs, rappelling down the canyon walls on ropes. With jackhammers and dynamite, they stripped away the loose rock. The agile and unafraid men included sailors, circus acrobats and Native Americans. The work proved difficult and treacherous. The highest cause of death was falling rocks. Left to their own devices, the men improvised hard hats by coating cloth hats with coal tar, naming them “hard-boiled hats.” Several men suffered broken jaws from the impact of falling rock, but the hand-fashioned hats prevented skull fractures.

Yet, stories remain how the risk and recognition of the job gave a particular status to some men. Accounts passed among workers of men swinging out from the cliffs and performing stunts for crews below—when foremen were not looking. Keen competition urged workers to swing out farther or higher. Still, their skills demonstrated a practical application. The story goes that high scaler Louis Fagan, nicknamed “The Human Pendulum,” transported a crew around a projecting boulder on the Arizona side, one worker at a time. The man to be transferred wrapped his legs around Fagan’s waist, grasped the rope, and with a mighty leap, the two men sailed into the air and swung around the boulder. Fagan then returned for the next man. This acrobatic commute happened twice daily until the job was finished.

Once the Colorado had been diverted, crews began erecting vertical columns on the dry bedrock. Today, imagine a giant Lego project. An estimated 215 blocks filled with 5,500,000 barrels of concrete bound by 55,000 tons of steel plates and castings make up the dam.

While the dam rose from a dry river bed, Boulder City blossomed into a planned community of 5,000 residents with 1,050 dwellings, nicknamed “Dingbat” houses, built in rows on the parched and wind-swept rocky desert. Married men lived in the rectangular cabins; single men in a refrigerated dormitory. Bachelors ate in a mess hall with food catered by Anderson Brothers, whose provision of premium food was guaranteed by a 24-hour cancellation clause in their contract. For high quality food, a private room, and transportation to the dam site, men paid $1.60 per day.

Within a decade, Boulder City became a model town with wide, paved streets, gas stations, eateries, stores, a superb movie house, cement tennis courts (lighted for night play), an elegant hotel, a baked mudpie golf course, an American Legion Hall, a hospital, four churches, and most novel of all, green lawns. During the time of dam construction, beer, but no hard liquor, was sold on the government reservation. Crime was almost nonexistent.

Six Companies completed the largest dam in the nation to that date ahead of schedule. Dedication by President Franklin D. Roosevelt occurred in 1935. As predicted by former Secretary of the Interior Ray Lyman Wilbur, the dam and the water impounded in Lake Mead became a tourist phenomenon. President Roosevelt said Boulder Dam stood as a testimony to the country’s ability to construct monumental projects in the midst of adverse conditions. Now, more than three-quarters of a century later, Hoover Dam, its name officially changed, still stands as a world-renowned structure. The dam is a National Historic Landmark and has been rated by the American Society of Civil Engineers as one of America’s Seven Modern Civil Engineering Wonders.

Indeed, Hoover Dam is a marvel. But the national treasure in this awesome structure lies in the men whose bravery and brawn tamed “The Red Bull” in a forbidding canyon and the women who made homes in a cactus-covered wasteland. With diverse backgrounds and expectations, they gathered in an unpopulated, dry and thirsty land with a singular focus: Boulder or Bust. n

Displays, maps, photos, and other exhibits in the lobby of the visitor center offer an introduction to Hoover Dam. A 10-minute film describes the construction of the dam and its contributions to the developing western states. The center’s exhibit gallery features numerous audio, visual and interactive exhibits, including a full-scale model of the huge buckets used to move concrete for Hoover Dam construction, a walk-though model of a generator, and a detailed diorama of the dam. On the observation deck, open and enclosed areas provide panoramic views of Lake Mead, Hoover Dam, the Colorado River, and the Mike O’Callaghan–Pat Tillman Memorial Bridge that opened in 2010. The bridge was the first concrete-steel composite arch bridge built in the United States, and it incorporates the widest concrete arch in the Western Hemisphere. At 840 feet above the Colorado River, it is the second-highest bridge in the United States, following the Royal Gorge Bridge. The visitor center and tours have an admission charge.

In Boulder City, known as a green oasis in the desert, history comes to life in the Boulder City-Hoover Dam Museum inside the historic Boulder Dam Hotel. A stroll around the Old Downtown reveals interesting shops, upscale restaurants, and the old theater built during the days of the dam’s construction. The Nevada State Railroad Museum also is located in Boulder City.
The reservoir created by Hoover Dam became Lake Mead, and it and the surrounding area are now one of the most popular recreation areas administered by the National Park Service. Year-round recreation attracts more than 9 million visitors a year.

However, when Secretary of the Interior Ray Lyman Wilbur drove the silver spike to mark the beginning of the Boulder Canyon Project, he called the dam “Hoover” in honor of President Herbert Hoover. Within weeks, Hoover lost the presidential election to Franklin D. Roosevelt. The new Secretary of the Interior, Harold Ickes, insisted that the dam had always been known as Boulder Dam. Both Ickes and President Roosevelt referred to the structure as Boulder Dam at the dedication in 1935. In 1947, the dam was officially named Hoover Dam by an act of Congress. Yet, today, the names are often interchangeable.