You are here: Home / Top Stories / The Delightful Dakotas
This post may contain affiliate links or mention our own products, please check out our disclosure policy here.

Tourists come to the Dakotas to see Mount Rushmore, but there is much more to see and do. We camped amid the unique rock formations of Badlands National Park and watched bison traipse through. We discovered an amazing cave with a visit to Jewel Cave National Monument.  We had close encounters with Rocky Mountain bighorns at Custer State Park. At Wind Cave National Park, we watched bison and pronghorn antelopes and explored one of the world’s oldest caves.  In North Dakota, we were hushed by the lovely loneliness of Theodore Roosevelt National Park.

With 244,000 acres, Badlands National Park in South Dakota is a land of massive buttes and profound gorges, sheer-walled canyons, knife-edged ridges, and fantastic, colorful spires and pinnacles.  This chaotic mix of landforms holds one of the world’s greatest fossil beds from the Oligocene epoch of the age of mammals.  About 30 million years ago, the area was a marsh rich with saber-toothed cats and a colossal rhinoceros called a Metamynodon, as well as animals that were the distant relatives of our modern pigs and horses. Prehistoric bones are still being uncovered.  In earlier times, say 75 million years ago, a shallow sea covered the land and it was home to enormous sea turtles, ancient fish and giant marine lizards.

In addition to fossils, the park offers the largest expanse of protected prairie in the national park system, with almost 60 species of grasses and hundreds of species of wildflowers and forbs. The mixed-grass prairie offers tall-grass species such as prairie cordgrass and big bluestem, as well as shortgrasses like blue grama and buffalo grass.

The easiest way to explore the park is the 30-mile Badlands Loop Road, but the entire park is open to exploration on foot. All vehicles, including bicycles, must remain on designated roads.

While you’re exploring, look for prairie dogs, black-footed ferrets, swift fox, porcupine, coyote, bighorn sheep, bison, and a variety of birds including black-billed magpies.  There are prairie rattlesnakes, too.

There are two campgrounds, one near the visitor center, and one at Sage Creek. You won’t find water at Sage Creek, but you may find plenty of bison.  We had big bulls walking directly through our camp.

Be sure to visit the Ben Reifel Visitor Center, where you’ll find touchable exhibits, a nice bookstore, an information desk, and a park theater with a surround-sound system.  For more details, call (605) 433-5361 or visit nps.gov/badl.

Jewel Cave National Monument
I’ve visited quite a few caves, but Jewel Cave is my very favorite. It not only boasts one of the most extensive displays of calcite crystals in the world, but also includes rare and unusual finds such as hydromagnesite balloons that occur in only six caves worldwide. Also look for helicites, frostwork, gypsum and scintillites.

Jewel Cave, 53 miles southwest of Rapid City, South Dakota, is the second-longest known cave in the world, with 166 miles of passageway discovered so far. When the monument was established in 1908, cave experts realized there were jewel-like calcite crystals, but less than a mile of the passage was known.  Today, much of the cave has been set aside for research and is closed to the public, but there are tour routes that disclose the cave’s many wonders.  Available tours include a half-mile, four-hour tour whereby visitors explore an undeveloped part of Jewel Cave.  The cave temperature is a constant 49 degrees, so bring a jacket or sweater even in the summer.

The National Park Service has warned that parking lot construction this spring and road construction this summer may delay visitor traffic, so advanced reservations are not being taken for most tours. Instead, tour tickets are being sold on a first-come, first-served basis.
Camping isn’t available at the monument, but there are public campgrounds in Black Hills National Forest. Private campgrounds are located in Custer, 13 miles east.  Visit nps.gov/jeca or call (605) 673-8300 for more information.

Wind Cave National Park
The beauty of this park six miles north of Hot Springs, South Dakota, is much more than just underground.  Though the cave is worthy of a visit, there are 28,295 acres of prairie to be explored   Left in a near-native state, the area has rolling grasslands, hills, pine forests and abundant animal life, including a mix of bison, elk, mule deer, coyote, prairie dogs and pronghorn.

Wind Cave is one of the world’s oldest caves, born about 320 million years ago. The cave has few of the more common cave formations, like stalactites and stalagmites, but it offers a cornucopia of boxwork (an unusual cave formation made of thin calcite fins that resemble honeycombs) and a variety of minerals, making it a world-class cave.

Established in 1903 as our eighth national park, the cave was a place deemed sacred by Native Americans.  Settlers discovered it in 1881. The best way to visit the area is to drive park roads looking for wildlife.  Bicycling on park roadways is also permitted.  The Rankin Ridge Nature Trail leads to wonderful views from the highest point in the park. There are 30 miles of hiking trails.

You can choose from several cave tours, and all are ranger-guided.  Cave temperature is 53 degrees, so bring a jacket or sweater.  The park has a campground that is usually open from April through October, but will not open this year because of budget cuts. For more information, call (605) 745-4600 or visit nps.gov/wica.

Custer State Park
Close encounters of the wildlife kind are possible here, one of the nation’s largest state parks. We found bison grazing, bighorn sheep resting at park headquarters, and prairie dogs standing at attention on their mounds.

Bison are the official logo of the state park, a place that boasts one of the largest bison herds in the country, with 1,300 roaming free.  Drive the 18-mile Wildlife Loop Road through this 71,000-acre park, and you will undoubtedly see some of them, along with elk, pronghorn and more.

The park is a popular place in August when the bison-breeding season is in full swing.  The bulls snort, grunt, paw the ground, fight and search for willing cows.  It’s a time of constant chaos!  The annual Buffalo Roundup is a key part of the park’s resource management program and an important way to keep tabs on the park’s bison population.  It will be held Sept. 27 this year and be followed by a two-day arts festival. The roundup serves to move the entire herd to corrals along Wildlife Loop Road. While most of the bison are released back into the park, some are sold at auction every November.

Several scenic drives, such as Needles Highway, are excellent ways to explore the park.  Hiking trails are also a popular way to get around.  The most popular hike in the park leads to Harney Peak, at 7,242 feet, the highest point in all of South Dakota.

Campgrounds and resorts are found throughout the park.  Many of them are open only during the summer, but a few are open year-round.  For additional information, visit gfp.sd.gov/state-parks/directory/custer/ or call (605) 255-4515. 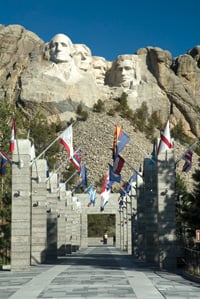 When I knew we were going to be in the Dakotas I figured we’d make a stop at Mount Rushmore, but I was all set not to be impressed. I don’t know why except I thought the place would be very touristy. But instead of feeling like “let’s see this thing and get back on the road,” I was happy to spend hours walking around the grounds, staring awestruck at the monument.  It is impressive!

We learned that it took 14 years to carve the heads (each of which is about 60 feet high) of the four U.S. presidents—George Washington, Thomas Jefferson, Theodore Roosevelt and Abraham Lincoln.  And the monument was carved in two main rock types—Harney Peak granite and mica schist.

Camping is not allowed at the memorial grounds, but there are campgrounds in the area.  The memorial includes bookstores, a gift shop and a café. The memorial is open year-round except Christmas Day. The visitor center will open at 8 a.m. and close at 10 p.m. from May 12 to August 10 this year and close at 9 p.m. from August 11 to September 30. There is no admission charge, but the parking fee for cars, motorcycles and RVs is $11. For more information, visit nps.gov/moru or call (605) 574-2523.

Bear Country USA
It’s not a national treasure, but a drive through Bear Country USA is educational because you can observe all the animals you might see in the wild during your visit to the Dakotas.
This unique drive-through park is eight miles south of Rapid City. During our three-mile drive we thrilled to elk, caribou, bighorn sheep, mountain goats and black bears. RVs are welcome to tour the park, which is open from May to late November.  For more information call (605) 343-2290 or check out bearcountryusa.com.

Theodore Roosevelt National Park
A visit to the Dakotas wouldn’t be complete without a stay at Theodore Roosevelt National Park. Located in North Dakota’s Badlands, the park offers three separate units, the North Unit, South Unit and the Elkhorn Ranch Unit.  Elkhorn Ranch was the site of Roosevelt’s main ranch in the 1880s. The buildings are no longer there, but an exhibit shows the locations of the house and outbuildings.  The journey to the ranch site requires at least a half-day via dirt road, along with a two- to three-mile round-trip hike once you arrive.  Seventy road miles separate the South Unit and the North Unit; Elkhorn Ranch is some place in between.

Although this area may seem lonely and inhospitable, it is home to a wide array of critters and plant life. Nearly 200 species of birds live here, as well as both mule deer and white-tailed deer.  Prairie dogs live in “towns” in the grasslands.  Bison and elk have been reintroduced into the park.

There are year-round campgrounds at both main units.  Cottonwood Campground is in the 46,159-acre South Unit and Juniper Campground is in the 24,070-acre North Unit (with 19,410 acres of designated wilderness).  Hookups are not available.  Hiking trails exist in both units, as do scenic drives.

The 36-mile Scenic Loop drive in the South Unit is a must-see, but be sure to first visit the Medora Visitor Center.  You’ll find information, a theater, and a museum offering personal items of Theodore Roosevelt, natural history displays, and ranching artifacts.

The less crowded and more remote North Unit offers a 14-mile Scenic Drive from the North Unit Visitor Center to Oxbow Overlook.  This is where you’ll find the photogenic Cannonball Concretions.  Formed by mineral-rich ground water, they are near-perfect spheres because the grains of sand that formed them were uniformly permeable.  It is a wild and ruggedly beautiful place that is well worth the drive to get there.  For more information, go to nps.gov/thro or call (701) 623-4466.