You are here: Home / Blog / The Full-Timing Nomad: Don’t Get Complacent
This post may contain affiliate links or mention our own products, please check out our disclosure policy here. 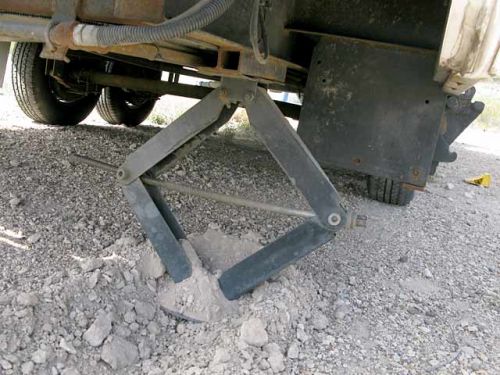 After seven years on the open road, routine campsite set-up and tear-down procedures have become second nature to my husband and I. We can set up temporary home as quickly as we can break it down, usually in under 15 minutes. However after performing these maneuvers hundreds of times during all sorts of conditions, all it took was one absent-minded morning to do some hefty damage to our RV.

Recently while escaping civilization in West Texas, we went boondocking in a beautiful, remote part of the state. We had the good fortune to enjoy a relaxing stay all by ourselves in our favorite campground for 10 days, until our water finally ran low and we had to get on the road.

The pace of our departure was more casual than usual since we were only driving an hour to our next destination. As usual, part of my duties as co-pilot were to look around the rig and make sure that windows were closed, stairs pushed in, and the jacks were up. I wandered around the RV somewhat in a funk as I knew that we’d soon be back in civilization. I looked around and everything seemed OK, so I hopped in the truck where Jim and Wyatt were waiting to go.

Jim turned the key and shifted the truck into drive, but we only lurched forward. He gave it a bit of gas, but again, just an unusual lurch. “That’s weird,” he said, while giving it a bit more gas and only creeping forward a foot or two.

Suddenly our eyes met in terror as we simultaneously blurted out “THE JACKS!”

Jim slammed the gearshift into park then ran outside. I didn’t even have the heart to look in the rear view mirror, I knew what was coming.

Doh! We forgot to put the rear stabilizer jacks up! Since we were parked on thick gravel, the jacks dug down deep and stayed there. They were so bent and distorted that it took Jim several attempts at gently jostling the RV back and forth, then manually cranking a wrench to get the jacks vertical again so we could retract them. Meanwhile there was nothing I could do but keep calm and maintain a sense of humor in the blazing hot sun. After an hour of backbreaking labor, he managed to get them retracted enough so we could drive away.

In the end we knew this crisis could have been far worse, and were instantly thankful that at least we could drive away. If the jacks been impossible to maneuver back up, we would have been forced to find a way to get help from the nearest town, which was over one hour away.

As we drove off with our mouths hanging open in total disbelief at our stupidity, we couldn’t believe that such a rookie maneuver had just happened to us. Soon it became clear that this minor calamity was a painful lesson that needed to happen. Our complacency at really looking to make sure everything was good-to-go was a sure sign from the universe which reminded us that no matter how long you’ve been on the road, you must be always be just as vigilant and cautious as you were when you were a newbie RVer.

What stupid rookie maneuver have you made on the open road? Can you laugh about it now? Please share your experience below, help me feel better for being such an idiot!