You are here: Home / Blog / The Full-Timing Nomad: Human Being Replaces Smart Phone Technology on the Road
This post may contain affiliate links or mention our own products, please check out our disclosure policy here. 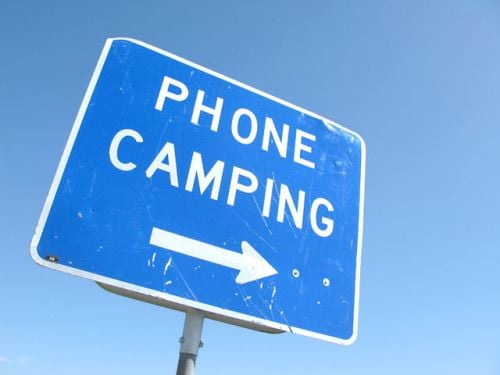 Being the frugal RVers that we are, Jim and I held off on getting a smart phone until last year when Verizon gave away the iPhone 4 in exchange for a two-year contract. We fell for it and now I’ll be the first to admit this miraculous little device has gotten the best of me.

The phone first proved its usefulness last year when we toured the East Coast. Gone were the days of getting lost on harrowing country roads with barely enough room for our rig; now we knew exactly where we could comfortably travel. Another way the phone became invaluable was when I realized I could toss out the bulky RV park guides and replace them with downloadable apps from those same publishers. Now we could hit the road without having to spend time researching our destination; I could find places while our wheels were in motion, what could be better?

The more dependent we’ve grown on this little device, the more we forget that there are still places in this country that lack decent cell coverage. The only time we remember this fact is when we purposely set out to far-away destinations like the Big Bend of Texas. During these expeditions to our favorite remote areas we expect to be out of range and know that our satellite Internet system will be our lifeline to the world. But the rest of the time while meandering along the roads of rural America, we assume there will be connectivity. But you know what they say about assuming; it only leads to disappointment – and possibly getting lost!

Last week we were reminded why assumptions are bad, when we set off to Western Colorado’s North Fork Valley. This rural mecca for wineries and locally-grown produce is one hour east of Grand Junction, and comprised of a small triangle of the farming towns of Hotchkiss, Paonia and Crawford. With our summer workamping gig behind us, we were looking forward to some R&R and hit the road without any final destination in mind; we just knew we wanted to stay there for a few days.

As we approached Crawford I pulled out the phone to search for some local RV parks, but became frustrated when even while standing in the middle of town we still couldn’t get a decent cell signal. It was hot, we were hungry and we wanted to check in somewhere besides the local state park. But without Internet access, I stood in the scorching sun like a clueless idiot. I didn’t know what to do without connectivity, a printed RV guide or an open Visitor’s Center.

Then, as panic set in, it hit me; you can have a face-to-face interaction and ask a local!

First, I asked at the post office while dropping off some mail. But the postmaster didn’t know any, so I headed to the general store and asked the counter woman. She happily sent us on our way to a place that was right up our alley; a new RV park in a rural setting featuring reasonable prices and a talkative owner teeming with character.

As I reflected back on the day’s events, I realized that if smart phones disappeared tomorrow, Jim and I could still have meandering adventures around the planet. After all, the Universe had conspired to help us find that great park without the aid of technology – what could be more adventurous than that?