You are here: Home / Blog / The Full-Timing Nomad: Is Free BLM Boondocking a Thing of the Past?
This post may contain affiliate links or mention our own products, please check out our disclosure policy here. 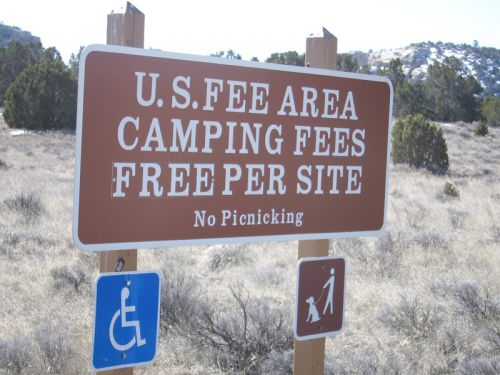 Earlier this summer the RV community started buzzing with chatter about H.R. 5204 Federal Lands Recreation Enhancement Modernization Act of 2014, a bill introduced in the U.S. House of Representatives that would impose new visitor and user fees throughout the National Parks System, U.S. Forest Service and Bureau of Land Management. Introduced by U.S. Representative Rob Bishop (R-UT), this bill calls for continuation of current fees at places like campgrounds and national parks, while taking on new ones such as:

• Parking and entry fees for any public lands that have a public toilet within a half mile.
• Day use fees for recreation in public areas such as waterways, horse and hiking trails on federal lands
• Raising the cost of interagency passes (i.e., The America the Beautiful Pass) with incremental increases every three years.
• Possibly impose fees on park shuttles, interpretive programs and special exhibits
• Require campers to pay fees for boondocking on public lands with no facilities

It’s that last point that has many in the RVing community up in arms as folks wonder if approval of the bill would permanently kill off free camping on public lands. Although the bill requires that at least 90 percent any new monies raised must be put toward maintenance of existing facilities and recreation areas within the park unit where the money was collected, most recreation enthusiasts remain skeptical that the increased fees would benefit anyone but bloated, inefficient government agencies.

The bill would affect all who enjoy public recreation lands, from national parks to the lonely Arizona deserts – but I’m not completely opposed to it. Don’t get me wrong; I’m frugal and don’t like paying more for camping as much as the next person who gets free rent each winter in Quartzite. But I’m also not against seeing my hard-earned money going toward maintaining the places I love to visit. My opinion puts me in the minority of RVers out there but if we all keep calm and stop and think about it: how many times have we seen garbage left behind at campgrounds, or disgusting toilets that hadn’t been cleaned in forever, or sad-looking national park visitor centers that harken back to the 1970s? Clearly, setting funds aside for public lands maintenance isn’t a priority in our national budgets; if it was, we would already be paying more taxes for it. Talk to anyone in the National Parks Service and they will tell you that the agency lives on a shoestring budget, which is why volunteers are so critical to its existence. If H.R. 5204 does what it’s supposed to, public lands agencies will acquire the money necessary to keep the scenic places we love in good shape.

As one person put it in National Parks Traveler, a family trip to Disneyland costs far more than the entry fee to a place like Yellowstone. Our public lands are still a bargain and asking users to do their part to help keep them beautiful seems like a small price to pay in exchange for all the benefits we receive.