You are here: Home / Blog / The Lincoln Home in Springfield, Illinois
This post may contain affiliate links or mention our own products, please check out our disclosure policy here. 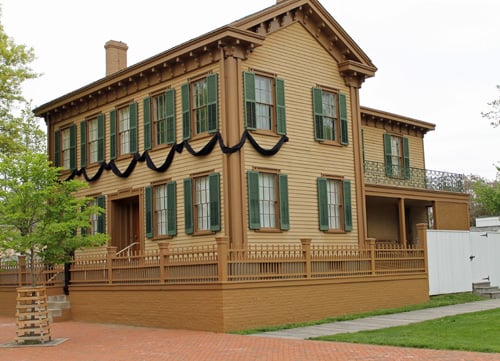 Abraham Lincoln, 16th President of the United States, owned only one home in his lifetime. The 12-room house in Springfield, Illinois, is the centerpiece of a four-block neighborhood of restored 19th century homes, sidewalks, gaslights, and wooden walkways. Tours, led by a National Park Service Guide, are free, but require a ticket from the Lincoln Home National Historic Site Visitor Center. Inside the Greek Revival house, visitors glimpse the Lincoln’s family life from 1844 until 1861 when they moved to the White House. During the time he lived in the home, Lincoln was elected to the House of Representatives in 1846, and elected President in 1860. 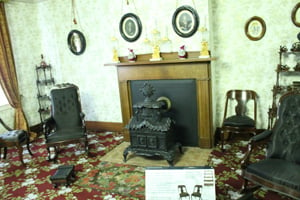 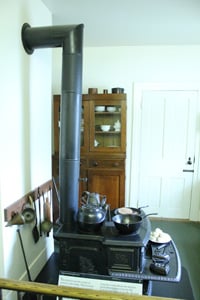 A guide relates that Lincoln’s legendary tall frame did not fit the chairs in their home. He often lounged on the floor in their sitting and dining rooms, reading and studying. Some pieces in the home are original, such as the wood stove where Mary Lincoln cooked for the family. Downstairs carpet and wall paper are reproductions, as close as possible to the original. Upstairs, where Mr. and Mrs. Lincoln occupied separate bedrooms, the wallpaper is a reproduction of the original pattern. Mrs. Lincoln often suffered with migraine headaches; she needed a place to retreat. Lincoln habitually worked into the night—or got up in the darkness to work. His desk sits in a corner of his bedroom. 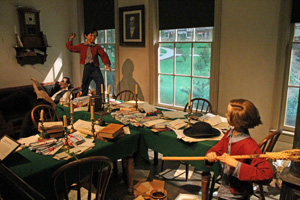 The upstairs also has rooms the Lincoln sons shared, and a room used by several young girls who served the family as a nurse and tutor to the rowdy Lincoln boys. More than a dozen young women served the family in less than 13 years. A scene of Lincoln’s downtown law office presented in the Lincoln Museum reveals the lack of discipline that Mr. and Mrs. Lincoln exerted over their sons. Life-like wax figures represent Mr. Lincoln lying on a settee, his long legs draped over the end. Two of the Lincoln boys stand on a conference table strewn with papers and throw inkwells at the office walls. Lawyer Lincoln appears totally absorbed in whatever he is reading, oblivious to the chaos in the room.

Following his father’s death, Robert Lincoln opposed the last renters giving tours of the home and charging a fee. He evicted the tenants and sold the house to the state of Illinois for $1, stipulating that the home would be maintained and there would never be a charge for tours. Ironically, the state permitted the same renter to stay on in the house and conduct tours, but there was no admission charge. Later, the National Park Service bought the house at a considerably higher price that $1. 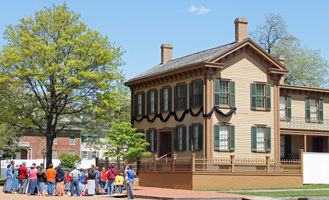 Visitors for tour to the Lincoln Home

Interpreters at the Lincoln Museum stated that the plans in the 1920s for the preservation of the house called for the entire neighborhood to be razed, with the exception of the Lincoln Home. Sketches showcased the house like a shrine. One particular interpreter said the Great Depression stopped work on the house—possibly the only good factor relating to the years of the country’s economic struggle. The neighborhood was saved. Houses that were built after the Lincoln era were removed, but several original houses remain. All the homes have been restored to their appearance during the time Lincoln and his family lived in the neighborhood. Two structures, the Dean House and the Arnold House, are open to visitors. The houses exhibit the life and times of Lincoln and his neighbors. In total, the buildings included in the park occupy 12 acres.

The home and Lincoln Tomb, also in Springfield, were designated National Historic Landmarks on December 19, 1960, and automatically listed on the National Register of Historic Places on October 15, 1966. The home and adjacent district became a National Historic Site on August 18, 1971, and is owned and administered by the National Park Service. As of 2014, the historic site is the only National Park Service property in Illinois.

The Old State Capitol, where Lincoln served as a state legislator, stands nearby in Springfield. Other buildings of interest include the law offices of Lincoln and his partner, William Herndon. The Lincoln Depot, from which Lincoln departed Springfield in 1961 for his inauguration in Washington, also is preserved in the downtown area.