You are here: Home / Top Stories / The Majesty of the Canadian Rockies
This post may contain affiliate links or mention our own products, please check out our disclosure policy here. 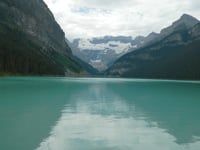 Having heard so much about the Canadian Rockies, we set out last summer to see for ourselves the scenic beauty of Banff, Lake Louise and Jasper. There is no doubt about the majestic blend of heaven and earth as you travel the mountain highways through these Canadian national parks.

It reminds one of the Swiss Alps as you gaze at the mountain peaks formed by melting glaciers during the ice age. Dense growths of pine and fir trees surround lakes that are tinted aqua by a high concentration of very fine rock sediment, called glacial flour, the result of heavy glaciers grinding down the mountainside. Every turn of the road brings another spectacular view as waterfalls cascade down mountainsides or fast-moving streams rush over boulder-studded courses. Little villages crop up every now and then, and there are always bicyclists pedaling along the road. Parked cars are at nearly every turnoff as hikers enjoy the trails that take you away from the highway.

Banff, our first stop, derived its name from Banffshire, Scotland, the birthplace of the original directors of the Canadian Pacific Railway. It is the highest town in Canada, with an elevation of 4,500 feet, and was Canada’s first national park, established in 1885. Its beauty is no secret to the world, and you can hear nearly every foreign dialect walking down the town’s tiny main street, where most tourists congregate.

RVers have a great campground run by the national parks system only a few miles from town, at Tunnel Mountain. It has more than 1,100 sites. Amenities range from full service to no service, the nicest being the trailer court that has big sites, lots of room with trees between sites and full hookups. During our visit, however, this area was under construction and unavailable. Campsite prices were a bargain at $38 (Canadian of course) for full hookups. Unserviced sites were only $10 cheaper.

We arrived at the start of Canada’s Labor Day weekend, and the last weekend before school started, so we were lucky to get an overflow site for $9 with no hookups. The next night we were able to get into a site with electricity.  Campfires are allowed at only certain sites and you have to purchase a $9 permit, however the firewood is free. 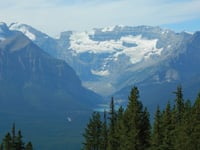 Being wildlife lovers we were hoping to see bears, moose, caribou and elk, but during our stay we disappointingly only saw a few elk and deer. This may be due to the heat wave Canada was experiencing with temperatures 10 degrees Celsius higher than usual, which kept the bears back in the cool, secluded woods.

Our next move was a 45-minute drive north to the “Jewel of the Rockies,” Lake Louise, named after Queen Victoria’s daughter. It is the most famous glacial lake in the Canadian Rockies, located 5,680 feet above sea level.  The turquoise lake is surrounded by mountains and the world-famous Fairmont Chateau, making a remarkable picture.  Swimming the lake is impossible, but you can rent a canoe to enjoy the panoramic splendor of the glaciers and Lake Louise.

For an awe-inspiring view of the Canadian Rockies, travel across town to Lake Louise’s gondola. You have the choice of a fully enclosed or open-air seat for this 14-minute climb that takes you to the 6,850-foot level. Once there, you can enjoy the view from an observation deck or take an ambitious hike or leisurely stroll on several trails.  Although the locals say there are frequent wildlife sightings there, we did not see any, except for a few garden-variety birds flying overhead. 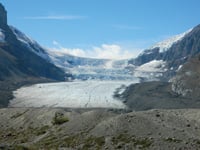 Back on the road, weaving up and around the Rockies toward Jasper National Park, you can’t overstate the beauty of this majestic drive.  Along the way you’ll find great opportunities to pull over and take an extended look at the breathtaking scenery, have a picnic, stretch your legs on a hike or look for a campsite.

Halfway between Banff and Jasper national parks sits the Columbia Icefield, an echo from the last ice age resting on a wide plateau. The icefield spans the Continental Divide and serves as the boundary between Banff and Jasper. It feeds into eight major glaciers, including one of the largest south of the Arctic Circle, and borders some of the highest mountains in the Rockies. It is best viewed from nearby Parker Ridge, but you can also take a short hike from a nearby parking lot, or take a ride on specially designed buses that can traverse the icefield.

Before retiring in 2006, Doug Imberi operated the public affairs office at a military distribution center in Tracy, California. He is an award-winning home brewer, and lives in Salida, California when not traveling in his fifth-wheel.

TIPS ON RVING IN CANADA

Make reservations at campgrounds, especially if you want to stay in a campground with hookups.  Call (877) 737-3783 or go to pccamping.ca at least 24 hours before your arrival.  Dates of operation vary from campground to campground.  Summer camping begins in May, with all campgrounds open by mid to late June.  Demand is heaviest June through September, with July and August being the busiest months.

Check with your bank to see if it has a sister bank in Canada. We use Bank of America, and Scotia is its Canadian sister. When we arrived in Canada, we went to the nearest Scotia ATM and withdrew Canadian dollars just as if we were at home.

Alcohol and tobacco are very expensive in Canada and there are limits on how much of either you can bring with you. Alcohol cannot be purchased anywhere except at government operated liquor stores.  Be sure and check how much you can bring with you without having to pay a duty.  Additionally, everything is more expensive in Canada so be forewarned.

If you are bringing pets, make sure you bring all their licenses and shot records. A letter from your vet stating your pet is in good health is good also. Although we were not questioned at the border, be prepared to furnish these documents if asked.