You are here: Home / Blog / The Mighty Mac Bridgewalk
This post may contain affiliate links or mention our own products, please check out our disclosure policy here. 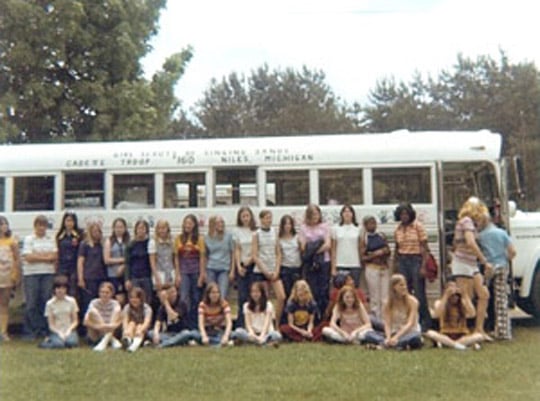 It has been my privilege to live in the Midwest, Southwest, and now in the Northwest. Michigan is not only the State of my birth, but also the State of my heart. We made many happy family memories in Michigan as well as Girl Scout memories. Two of those memories involve doing the five-mile Mackinac Bridge Walk in the early 70s. Except for rare weather-related closings, the bridge is only closed (well, one side of it) for the annual walk event which was begun on Labor Day weekend in 1958. An average of roughly 50-65,000 people walk the bridge each year, the only time that pedestrians are allowed on the bridge. 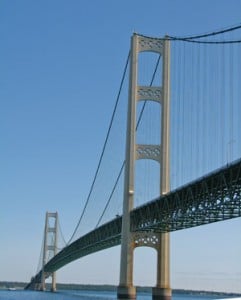 The five-mile-long “Mighty Mac” bridge that opened in 1957 carries Interstate #75 over it and connects Michigan’s Upper and Lower Peninsulas as it passes over the wild waves of the Straits of Mackinac. The Mackinac Bridge is one of the world’s longest suspension bridges. The walk starts at 7 a.m. It is led by the Governor of Michigan who walks from the town of St. Ignace on the north side of the bridge in the Upper Peninsula, to the village of Mackinaw City on the south side of the bridge in the Lower Peninsula.

You walk at your own pace along the 26,372’ bridge length and at the end, they give you a “Certificate of Completion.” Walkers climb aboard school buses for a shuttle lift back to their cars.

On our second trip to the Bridge Walk, our GS troop decided to invite residents of the Niles community to join us aboard Bessie Bus on a camping trip to the Straits of Mackinac. Our ultimate goal was to do the Bridge Walk. Only one adventurous lady answered our invitation. My memories, stories, and pictures from that time are a little fuzzy and any written record or photographs have been lost to time and the minehunes who changed and deleted at will as they roamed through my computers over the years. My daughters didn’t remember specifics either. 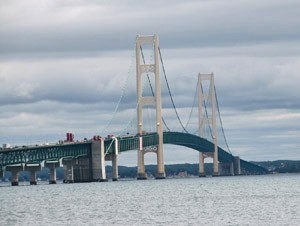 Without remembering all the details, I recall that my co-leaders, husband Jack and E. J. Burnham, and I, were concerned with this lady’s ability to camp and actually walk those five miles over the bridge. We were still at the age when we thought 65+ was old. (I’m coming to that conclusion but not just yet!). She walked our socks off! We needn’t have worried. She not only took off like a herd of turtles but she camped in tents with us, joined us for our big evening campfires, helped us eat whatever we cooked, and devoured those sticky s-mores. I suspect it was a story she told and retold to anyone who would listen.

Some of those same GS who are now grandmothers and great grandmothers are now on Facebook. If they remember anything from those trips, I would love to hear about it. 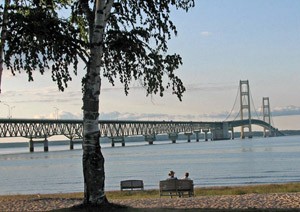 I have good feelings when I remember those times. I guess I’ve forgotten any problems we had or maybe now I know they weren’t bad enough to be concern me. I hope you and your loved ones will be making some super good memories this Labor Day Weekend. God Bless until next week.