You are here: Home / Top Stories / The Mysterious Land of Hovenweep
This post may contain affiliate links or mention our own products, please check out our disclosure policy here.

The southwestern United States is home to a number of sites where early settlers of our hemisphere lived and sometimes thrived.  A few like Mesa Verde are well known and easily visited.  Others are more remote, lesser known and offer a more personal experience.  All will leave visitors with as many questions as answers: who were these people; why did they live in these locations; how did they survive, and why did they leave?  The structures that remain are also full of mystery.  Did these ancient people actually track the movement of the stars and planets?  Is that why some buildings seem built to focus on solar events such as equinoxes?  What kind of communities were these?

One of the lesser known of these centers is Hovenweep, a once thriving community that was abandoned more than 700 years ago. Hovenweep is the name for a group of small communities straddling the border between Utah and Colorado, not far from Four Corners.

Even today, visitors might wonder why anyone would want to live in the dry Southwest.  Easterners marvel at the long stretches of highway seemingly devoid of human settlement or activity.  The dryness seems oppressive, and rivers often lack visible water on the surface. We who live here at least can crank up the rig and head for greener pastures!  So why would ancients, who had only their own two feet to carry them from place to place, settle in places like Hovenweep?

The most likely answers are water and safety. Water was and is the ultimate magnet for settlement in the arid stretches of our country. And because water was never abundant, fewer ancient people settled here as opposed to the lush green expanses of the Eastern United States. Where water was found, people could change from nomadic hunter-gatherers, always on the move, to agriculturalists, who were no longer totally dependent upon the vagaries of wildlife or wild plants and their fruit for food. And they didn’t have to contend, at least at first, with large numbers of neighbors ready and willing to force them away from their newfound security. 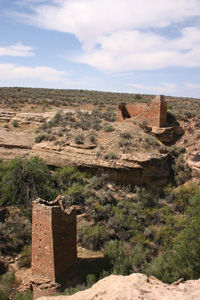 Hovenweep is located on a 500-square-mile raised block of land called Cajon Mesa, a part of what scientists call the Great Sage Plain. Because of the uplift, several streams drain the mesa to the San Juan River to the south. Hovenweep is not one but several small communities, all within a day’s walk of each other utilizing those streams. The name came about long after the communities were abandoned, and actually means in the Ute and Piute language, deserted valley.  Apparently, modern Native Americans wondered what went on here even as we do.

In spite of not being well known, portions of Hovenweep are easily visited. And Hovenweep can be combined with a visit to the better-known Mesa Verde, which is about 60 miles away. Hovenweep was designated a national monument in 1923 and as such has a modern visitor center and a campground with some sites that can accommodate up to a 35-foot rig. There are no hookups or dump station. If you prefer the comforts of a full hookup park, they are available in Cortez, Colorado, which is convenient to Mesa Verde, or Bluff and Blanding, Utah, all little more than an hour away. The roads into Hovenweep are paved, but somewhat narrow with numerous curves. If you choose to bring your rig into the monument, there is adequate parking at the visitor center.

Why visit Hovenweep if Mesa Verde is close at hand? I have visited Mesa Verde, as well as Betatakin, and Canyon de Chelly. These three well-known Pueblo-era communities are similar in that most of the structures were erected in cliff alcoves for defensive purposes. Structures are very close to each other, tightly packed because of the limited space. Inhabitants didn’t need a lot of space, leaving their homes to farm the canyons below or the rims above. Little Ruin Canyon at Hovenweep, the most accessible portion of the national monument, differs in being strung out along the edge of a shallow canyon. Although within easy walking distance, the structures are not tightly congregated.

I came away impressed by the superb craftsmanship of the rock masons at Hovenweep, something I had not seen at other locations. The unique use of towers is highly unusual for Pueblo settlements, as are the several rounded structures. Many Hovenweep structures are two or more stories high, and some are actually constructed on uneven rock bases.

Evidence of Agriculture
Hovenweep’s agricultural base is seen in the remains of check dams to hold back water and rich soil as well as terraces on which crops were planted. Building development is more extensive at the head of canyons where seeps and springs were usually located.  Towers such as the square tower at Little Ruin Canyon show evidence of being used for multiple purposes: storage for corn, beans and squash and even astrological observations. They may have had defensive purposes as well. Other Hovenweep locations are similar, although there are interesting variations in the towers, some round, some shaped like the letter “D.”

From the visitor center, a 1.5-mile trail with an additional half-mile loop offers an easy opportunity to see the various structures, including the square tower. The tower is two stories tall and is situated on a large sandstone boulder. It appears to have been built in a slight spiral shape, perhaps for added strength or even perhaps just for aesthetics. One T-shaped doorway allows entrance. There is evidence of an earlier doorway facing a nearby seep. From the trail, the tower is actually lower than the level on which you are standing, which in itself invites a variety of questions. Its location near the seep made me wonder if one of its purposes was defense, even though archeologists have found no evidence of warfare.

Hovenweep Castle consists of two D-shaped towers perched on the edge of the canyon overlooking the square tower. A wooden beam in one tower was checked for growth rings. It was cut in 1277, which is one of the latest dates for any structure in the San Juan River basin. The “castle” impressed me with the craftsmanship shown in its construction.

Another structure that quickly captured my interest was what is now known as Eroded Boulder House. This structure incorporates the huge rock under which it sits as part of its roof and walls. It reminded me of one of those eggshells that have decorations inside.

The Rim Trail Loop offers an opportunity to examine several other structures at close range. Unlike other prehistoric ruins I’d seen, there was little similarity between structures. The Trail Guide estimates that you can complete both the Rim Trail Loop and the Tower Point Loop in less than two hours, thus making Hovenweep a possible one-day extension of a trip to Mesa Verde.

Short History
The occupation period of Hovenweep is similar to Mesa Verde and most other ancient Pueblo communities. Early tribesmen visited the sites over two or three centuries, possibly using them as temporary camping spots because of the availability of water.  Then around 1100, the nomadic tribesmen began to coalesce into villages. At first, they lived in rudimentary pit dwellings, partially dug into the ground. But then, around 1200, they began to build the sophisticated structures characteristic of what we find today at Hovenweep. Yet by 1300, most of the communities were abandoned.

This means that the structures we now visit were only in use for one, two or at most three generations. It’s amazing to think the inhabitants put all that effort into these wonderful structures only to pick up and leave in less than a hundred years. Studies have shown the likelihood of a massive and long-term drought that set in throughout the Southwest in the late 1200s. Across the entire region, settlements were abandoned and populations disappeared.  Although it is assumed that such circumstances would cause conflict, I saw no evidence of the destruction of warfare here. We have only the evidence that well-constructed buildings were hastily abandoned, leaving storage jars with corncobs still in them. There are no written records to rely on. Traditional stories among modern Native Americans belie the earlier thoughts of scholars that the Pueblo people simply disappeared. New Mexico and Arizona Pueblo tribes claim these people as their ancestors and there is little reason to doubt that claim. Since much of the Southwest is currently enduring a long-term drought, we can perhaps better understand the difficulties the ancients faced. While we aren’t experiencing wholesale abandonment of towns or cities, we are seeing farmers and ranchers forced to give up their livelihood due to the impossibility of getting enough water for their crops or pastures. In light of our current experience, it may not be so hard to understand why the inhabitants of Hovenweep would abruptly leave their beautiful and useful structures in search of more comfortable climates.

Hovenweep is well worth a visit. Go there to admire rockwork craftsmanship such as you will find at few other Pueblo sites. While there, contemplate what led men and women to that site in the first place, and at how they perceived their lives. We call them ancient or primitive; yet their agricultural and construction skills are exceptional. Their understanding of seasons, stars, equinoxes, and understanding of when to plant and when to harvest would have modern farmers nodding in agreement. My visit also served as a reminder that men and women have lived, loved and dreamed here in this hemisphere for a much longer time than we usually think. n

Gerald C. Hammon is a writer who lives in Prescott Valley, Arizona.

Entrance to Hovenweep National Monument is $6 per vehicle ($3 if you hike or bike in). Camping is $10 a night. Your Golden Age Passport is accepted here.  There is more information at nps.gov/hove.

The trails at Little Ruin Canyon are mostly on level ground, but still require adequate walking gear. There are places where if you have any balance problems, a walking stick (or two) would be useful.

Hovenweep has other ruins open for visitation. However, getting to them requires a high-clearance vehicle or a hike. My wife and I were in a Honda hybrid and elected not to try those. Photos show they would be interesting. However, the most numerous and extensive ruins can be seen at Little Ruin Canyon, the location of the visitor center.