You are here: Home / Top Stories / The National Parks and Our Children
This post may contain affiliate links or mention our own products, please check out our disclosure policy here. 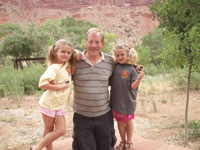 Our national parks have been called “America’s Best Idea,” and for many years, families would pass their love of the parks on to the next generation. Unfortunately, some studies suggest that fewer children are going to national parks today because they would rather play video games and other electronic gadgets.

I am fortunate to have two granddaughters, Taylor and Hailey, who like the outdoor life. On our first visit to Yellowstone National Park, the girls were only 3 and 5 years of age, but joined the park’s Junior Ranger program.  The program is for kids 5 to 12, so we had to sneak Hailey in, but I don’t think it really mattered much.

Junior Ranger requirements vary by park, but most activities involve hiking on a park trail, attending a ranger program, finding various landmarks and completing the official Junior Ranger activity paper. The Yellowstone activity paper is 12 pages long and by far the most difficult of the Junior Ranger programs we have come across. My first impression was that it would spoil our visit because it would take up all of our time. It turned out to make our visit much more enjoyable.

While Junior Ranger activities are geared toward children, I have to confess that I have learned a great deal while assisting my granddaughters with these activities.  They have each earned eight Junior Ranger awards. 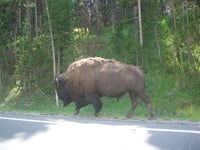 Yellowstone became a national park on March 1, 1872, making it the first national park in the world. It is known for its geothermal features, wildlife, majestic mountain views, waterfalls and spectacular scenery.  The Yellowstone caldera is the largest volcanic system in North America and has been termed a “super volcano.”  The caldera last erupted 640,000 years ago and was 1,000 times more powerful than the 1980 Mount St. Helens eruption.

The most popular attractions are the Old Faithful Geyser and Upper Basin, Grand Canyon of Yellowstone, Mammoth Hot Springs, Yellowstone Lake and Hayden Valley. But the main appeal for Taylor and Hailey are the animals, and there are lots of them. In Hayden Valley, you can see hundreds of bison. We lost count at about 215.

One time, we stopped to view a large bison that was about 30 yards away. We got out of our car. I went back into the car to find Taylor’s shoes and left the girls standing outside.  The bison decided to walk across the road and passed right by, less than 10 feet from them!  Once they were safely in the car, I quickly grabbed the video camera and interviewed the terrified girls. The video is priceless!

Another time we were having a picnic lunch by the Firehole River. Hailey went to get something out of the car. As she was returning, a large elk stood up and strolled across the meadow between the car and our picnic.  Fortunately, the elk was not bothered by her and walked right past. 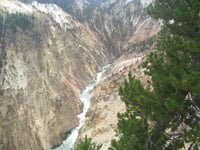 No trip to Yellowstone is complete without a visit to the Old Faithful Inn, which was built in 1904 and has a 500-ton chimney and a 76-foot-high lobby. It has been described as a building with “rustic architecture blown up to enormous proportions.” However, no words can describe its grandeur.

Once a Junior Ranger activity paper is completed at Yellowstone,  the child takes it to the visitor center to have a ranger review it, and then takes the Junior Ranger oath: “As a Junior Ranger, I promise to learn all I can about Yellowstone and to teach others to love and respect its beauty, its plants and its animals.”

When my granddaughters were awarded the official patch and had their names announced to everyone in the visitor center, I never saw them look so proud.  I couldn’t help wondering if Hailey hadn’t become the youngest Junior Ranger ever.

The girls have also participated in the Junior Ranger program at Grand Teton National Park, which is just 10 miles south of Yellowstone.

Our visit there began with a two-mile hike to the back side of Jenny Lake. About a mile into the hike, I heard a loud cracking sound. I looked up and saw a tall lodgepole pine tree about to topple. I yelled at the girls and we took off running. The tree fell right where Taylor had been hiking. Needless to say, we were all quite terrified and hurried back to the trailhead.  I had been concerned about lightning, bears and other wildlife, but the thought of a falling tree had never even occurred to me. We decided to take the scenic boat ride to the back of Jenny Lake and hike up to Hidden Lake. We were rewarded with spectacular views of the Grand Teton mountain range.

Hailey, now 8 years old, wants to be a park ranger at Yellowstone when she grows up.  Some of my fondest recollections of my three sons growing up are of our visits to the national parks. I hope to take my granddaughters to Yosemite and to revisit Yellowstone during the winter months in the near future. The memories we make with our kids and grandkids will last a lifetime.