You are here: Home / Top Stories / The Newest National Park
This post may contain affiliate links or mention our own products, please check out our disclosure policy here. 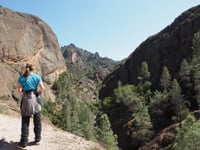 I love national parks. So during a trip to central California, I had to visit the newest one, Pinnacles National Park, east of the Salinas Valley.

Pinnacles gets it name from its unusual rock formations and spires. President Theodore Roosevelt declared it a national monument in 1908; Congress passed a bill upgrading it to a national park in late 2012, and President Barack Obama signed the legislation into law in January 2013. The park encompasses 26,000 acres in a mountainous area about 14 miles east of Soledad and 85 miles southeast of San Jose.

The park attracts hikers, rock climbers and people hoping to spot one of the park’s giant California condors. Unlike many national parks, Pinnacles is most popular in the cooler months because of the extreme heat in summer. I visited the park in April, when the temperature was in in the high 70s, and it was an ideal time. In spring, the grasses are green and a variety of wildflowers can be seen along the trails. Fall and winter would be good times to visit, too.

The park is divided into east and west portions, connected only by trails. There is no through road. The east side is more developed, with a visitor center, picnic areas and campground. The west side has only a ranger station and a parking area for trail users and rock climbers. Most of the park is protected as a wilderness area. 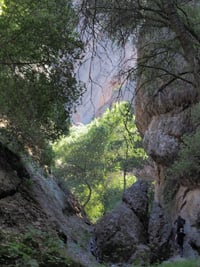 For hikers entering from the west, there are three trails. The most popular routes are the Juniper Canyon Trail to the High Peaks, and the Balconies Trail, which leads to volcanic rocks and a talus cave. Talus caves are formed by the openings among large boulders that have fallen down into random piles. Trails on the eastern side extend from the Pinnacles Campground, the Old Pinnacles Trailhead and the Bear Gulch Day Use Area.

The park’s talus caves house at least thirteen species of bats, including the Townsend’s big-eared species. During the bat’s breeding season, these caves are closed. They also may be flooded at times of high water.

Besides bats, park lands are prime habitat for prairie falcons and are a release site for California condors that have been hatched in captivity. Condors, which have become nearly extinct, have a wing span of more than nine feet. Pinnacles has a relatively abundant population of wildlife, which contributed to its becoming one of three release sites in the U.S. for California condors. The park’s 27 free-flying condors are monitored and managed by biologists to ensure safety and survival of the species.

I had hoped to see a condor and was told that one of the best viewing areas was at High Peaks in the early morning or early evening. High Peaks can be reached from either entrance to the park, but the hike is strenuous. A more convenient viewing area is along the ridge southeast of the campground, and there are a couple of spotting scopes at the campground.

Although I didn’t see a condor, my visit to Pinnacles National Park was all I hoped for, proving once again that every national park is special.

James Richardson is a writer and photographer who lives in Oakland, Tennessee.

Both park entrances are on State Highway 146. To reach the west entrance, from Soledad, take Highway 146 east for 14 miles. The road reduces to a single lane in some places and is not recommended for RVs or other large vehicles. The east entrance can be reached by taking State Highway 25 (also called Airline Highway) at Hollister and traveling south 30 miles to Highway 146 and then west to the park entrance.

Pinnacles Campground has sites for RVs, tents and groups. Most RV sites have electrical hookups and share community tables and barbecue pits. Water is located throughout the campground. Oak trees provide shade at many campsites. Showers and a dump station are available. Pets are allowed in the campground, on paved roads, and in parking areas, but not on trails.

For those who don’t have national park passes, entrance fees are $10 for passenger vehicles and motorcycles and $5 for pedestrians and bicyclists.