You are here: Home / Blog / The Old Mill at T.R. Pugh Memorial Park
This post may contain affiliate links or mention our own products, please check out our disclosure policy here. 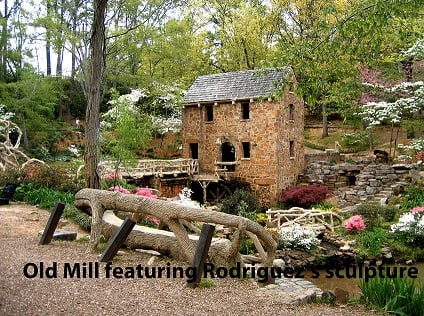 Arkansas holds numerous treasures. Most are natural: some are manmade. Others have historical significance. The Old Mill at T.R. Pugh Memorial Park in North Little Rock, Arkansas, appears historical, but it is history of its own making. Since its construction in 1933, millions of eyes have caught the image of an old abandoned stone mill in the opening credits of the 1939 classic movie “Gone with the Wind.” North Little Rock developer, Justin Matthews, had the park built in memory of his lifelong friend, T.R. Pugh. He intended that several acres of rough and uninviting terrain in his suburban residential development would look like an old abandoned mill forgotten in time. In order to convince those who passed, he had the year 1833 etched on the mill’s exterior. He succeeded. Built and dedicated only six years before the famous movie showed in theaters, no one can imagine that the two-story mill did not exist in Civil War times. 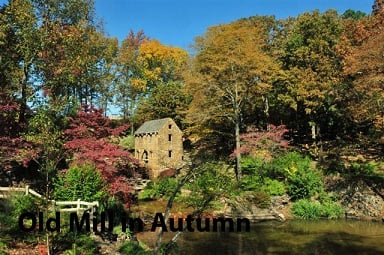 Yet, the now-old production gristmill holds some Arkansas history. The iron gristmill on the first floor came from a working mill that dates back to 1828 and a family named Cagle. Several millstones, as well as iron pieces from the shaft of a steamboat that once cruised the Arkansas River, are in the building. Two stones on the north end of the park with numbers “1” and “4” chiseled in their surfaces are original milestones from a road laid out along the Arkansas River near Dardanelle by Jefferson Davis, who was at the time a young army engineer.

However, the weathered mill building is only one component of the manmade treasure at the Pugh Memorial Park. Matthews commissioned Dionicio Rodriguez, a Mexican artist, to create the building’s floor and stairs with the look of well-worn wooden planks. The hand railings appear to be logs and limbs nailed together. The ambiance of the park continues with a bridge, benches, a rain barrel, downspouts and windowsills on the building, and several picnic tables. Each piece appears to be ancient, weather-beaten wood. In fact, the late Mr. Matthews is quoted as saying the 35-foot bridge spanning a small creek resembles “…two bent swamp persimmon trees joined together.” The bridge, as well as the tables and benches, are pitted as though birds have pecked holes while searching for insects. Details include peeling bark and broken tree branches. Yet, the pieces are not wood, but are hand sculpted by Rodriguez in dyed concrete. Even the five-ton overshot wheel at the mill building is formed from concrete. The old gristmill and driving equipment are disconnected from the water wheel. However, the water gate on the flume above the wheel leaks enough water to keep the wheel authentically turning. 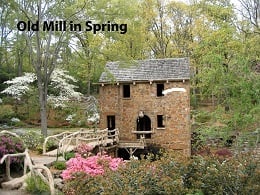 Historian Julie Vosmik followed her interest in sculpture and architectural history into extensive research about the artist, Dionicio Rodriguez. She discovered that the sculptor protected his trade secrets in creating a type of folk art called el trabjo, translated—the rustic work. A man who worked as Rodriguez’s assistant in the early 1940’s remembered that the artist “…worked in a tent where he mixed his colors. He used gallon jugs, and when he emptied one, he broke it. No one ever saw the names on the jars.” Vosmik also learned that the artist sometimes worked out of the trunk of his car. If someone asked too many questions, he did not retain their friendship. The artist did not speak English, which also hindered his communication while living in the United States.

Matthews first saw Rodriguez’s work at the president’s palace in Mexico. When he tried to commission him to create pieces at the Pugh Memorial Park, Rodriguez lived in San Antonio, Texas. The artist had plenty of work at that time and was not interested in doing pieces in Arkansas. The Great Depression brought leaner times. The Mexican artist changed his mind, and also lowered his fees. His condition for the work commissioned by Mathews: his sculptures must be displayed in places accessible to the general public. His work is today in two other North Little Rock parks: Crestview and Lakewood. Additionally, his work exists in Memorial Park Cemetery, Memphis, Tennessee; Cedar Hill Cemetery, Suitland, Maryland, and Brackenridge Park in San Antonio, Texas. 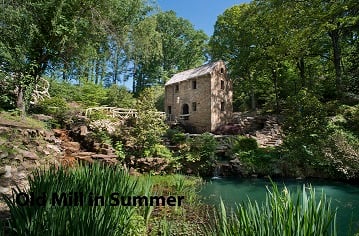 Ms. Vosmik, realizing the significance of Rodriguez’s work, pursued a National Register nomination for his Arkansas pieces in the North Little Rock park. However, some of his sculptures did not qualify because they were less than 50 years old. Also, there were few nominations for sculptures of national significance. Despite years filled with obstacles, the National Register designation was awarded on December 4, 1986. Ten years prior, the former Justin Matthews Company had given the T.R. Pugh Memorial Park to the city of North Little Rock. In 1990, a postage stamp commemorating the 50th anniversary of Gone with the Wind’s eight Academy Awards was unveiled at the park.

After the park’s dedication in 1933, the Arkansas Gazette described the Old Mill’s charm as a place “…that Rip Van Winkle would feel at home.” Although the park was designed to appear abandoned and forgotten, countless visitors over the years have walked its pathways, sat on its benches, and picnicked at its tables. Weddings often take place in the setting of long ago. Glynda Turley is one of many artists who have captured the beauty and romance of the park in four distinct seasons. The Old Mill is definitely an Arkansas treasure, both historic and man-made—a treasure worth a stop by travelers passing on Interstate Highways I-40 or I-30.